With interleague play making its return tonight, the Yankees find themselves in the unenviable position of losing the DH. While Jason Giambi’s bat will stay in the lineup, the Yanks will either have to sacrifice Hideki Matsui’s bat or Johnny Damon’s bat and defense (or, as a few commenters have noted, Melky Cabrera). That’s an easy decision to make.

Making matters worse for the Yanks is the lack of data against tonight’s starter Shawn Chacon. No one on the Yanks outside of Bobby Abreu has faced the former Bronx flash-in-the-pan more than a handful of times. Matsui is 2 for 3 off of Chacon, Damon is 1 for 5 and Melky is 1 for 1. Decision. Decisions. Decisions.

Meanwhile, as the Yanks head to an NL park, their pitchers will have to bat. Overall, the Yanks on the team with official at-bats are a whopping 36 for 295. That’s .122 for those keeping score at home and a far cry from their DH production this season (.319/.407/.504). With the Yanks offense slogging along, it’s time for the guys slumping and underperforming — middle infielders, I’m lookin’ at you — to pick it up a bit. 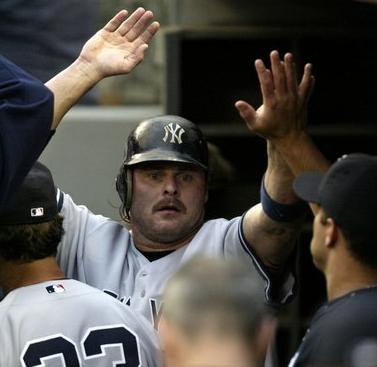 Remember April? Man, we had some heated arguments back then. Cano wasn’t hitting, Giambi wasn’t hitting, Damon was on and off, Jeter wasn’t off to the hot start we saw the past two years. Two guys in particular, though, took the brunt of the offensive criticism: Giambi and Cano. Each time they came to the plate and failed, people were clamoring for them to find a seat on the bench. There was even a contingency of Yanks fans who wanted to see Giambi released.

Good thing they didn’t get their way.

On the month of May, Giambi is hitting .339/.481/.726. That is absolutely insane. Each of those three numbers represents the top spot on the Yankees for the month. On the season, he’s at .244/.393/.556, a more than respectable line that, if nothing else, shows the effects of his abysmal April.

Before the season started and during the first few weeks, some Yankees fans were up in arms about Giambi. DFA him! He won’t be able to help this team! Even as we got into May and the Giambino started hitting a bit better, especially for power, the detractors were still out. At this point, though, to rail against Giambi seems a bit foolish, eh?

(Then again, guys like Jamal looked the fool when he continually defended Giambi in the early going. Baseball’s a funny game like that.)

The thing is, we’ve seen this before. I present to you the year 2005. Giambi was coming off a 2004 defined by a stomach parasite and a benign pituitary tumor. But he was healthy in the spring, and was ready to get back into the game. Problem was, he was no good early on.

Prior to June 15, he had just three home runs. On May 22, he was hitting .215/.368/.346. Yankees fans wanted him out, and wanted him out fast. Even as we moved into late June and his OBP rose to over .400, people still weren’t happy with Giambi. The stigma of steroids still surrounded him, and I heard many a person talk about how he can’t compete without the juice.

This year, it appears his resurgence is coming along a bit quicker. He’s been one of the drivers of the Yankees offense, which is finally starting to look like we expected from the get go. And, most importantly, he’s hitting well enough to compensate for his poor defense at first base. There are no guarantees that he keeps it up — as I said, baseball is a funny game like that — but Giambi has shown that he can in fact contribute to the 2008 Yankees.

Hopefully, Girardi’s veteran rotation will help keep Giambi — as well as Matsui and Damon — fresh throughout the year. Matsui and Giambi in particular have been integral in molding the offense. With A-Rod back and Jorge on the way, maybe we can start to put up some more crooked numbers.

The refrains are becoming part of the daily routine. “We need another bat.” “Add a bat.” “When will this team hit?”

Somewhere out there, in between a rock and a hard place, is a free agent with the offensive skills to boost the Yanks. This free agent hit .276 last year with a whopping .480 OBP and a .565 slugging percentage. Of course, that free agent is also facing a federal indictment and has featured prominently in the steroids scandals that have rocked baseball over the better part of the last five years.

I’m talking about none other than Barry Bonds.

Now, these days, it sure is easy to consider Bonds. From what we know, he’s basically waiting for some team to pick up the phone and call him. He can probably be in playing shape in quick order, and installing him in the middle of any Major League lineup makes the lineup better.

For the Yankees — a team not afraid to court controversy and attention — Bonds would be a bit anathema to the supposed youth movement in place. But — and this is a fairly significant but — Bonds would have a role on the team. He’s the splashy sort of signing that Hank Steinbrenner would love, and he would be a valuable insurance piece.

For all of those who say the Yanks have too many first basemen and too many DHs, as we’ve seen with Jorge and A-Rod, when one of those seemingly spare parts goes down, then what? If Jason Giambi gets hurt, the Yanks lose his awakening bat. If Johnny Damon goes down and Hideki Matsui has to slide into left, the Yanks have a gaping hole in their lineup. There is, in other words, always a place in the lineup for a bat that can still hit .276/.480/.565, and Damon and Giambi have been far from paragons of health over the last few years.

I’m not suggesting or advocating for the Yanks to sign Bonds. I’m simply saying that he’s out there, lurking and waiting. He could fix the offensive woes and create all sorts of headaches for the Yanks and for their opposing pitchers. What would you do?

When Alex Rodriguez went down with a quad injury that will keep him on the shelf for a few weeks this year, he hadn’t been off to the same start he enjoyed last year. Admittedly, that’s not a fair comparison. How often does any player hit 14 home runs in a month while single-handedly carrying a team?

But despite a slower start, he still had a vital role in the lineup. As the cleanup hitter, he was hitting .272./330/.506 with 4 HR and 10 RBI in 81 at-bats. Those are poor numbers by A-Rod’s standards, but to suggest that the team doesn’t miss him is wishful thinking at best.

In his absence, the Yankees’ replacement third basemen have been downright awful. The three replacements — Wilson Betemit, Alberto Gonzalez and Morgan Ensberg — have now enjoyed 70 plate appearances as third basemen this year. Collectively, they are hitting .239 with a .271 OBP and a .269 slugging percentage. That is utterly woeful.

While it’s easy to say that the Yankees were a .500 team without A-Rod and, hey, wouldn’t they still be a .500 team now, that ignores the reality offered by those who have tried to replace Jorge. The Yankees are missing a ton of offense right now, and it’s showing in the product on the field. The middle of their lineup is weak; Shelley Duncan had to hit cleanup against lefties, and even Derek Jeter found himself penciled into the four hole for one game. The bottom of their lineup — drawing well below league-average production from the C and 3B spots — has become a terrible liability. It’s a cascade issue.

The Yankees probably could have withstood an injury to either A-Rod or Jorge. They probably would be two games behind Boston had just one of them gone down. But with both out, this team’s offensive production slides off the table. Get well soon, guys.

I was just exchanging emails with a loyal reader on the topic of Robinson Cano. A hot topic for sure, considering his putrid start. To this point, I’ve remained unworried. We saw a similar start from Robbie last year, and I expect he’ll turn around soon enough. But I’d like to take a look at some of Cano’s numbers from the early going, and see if anything indicates that we should be really worried.

Here’s the thing that has me optimistic about a turnaround: His batting average on balls in play is .156. That is the second lowest in the entire American League. Incidentally, Giambi is the pits with .119. Last year, Cano’s BABIP was .329. In 06 it was .359, and in his rookie season it was .318. So I think we can expect that he will bring it up yet again.

So all considered, I’m fairly confident that Robbie will swing his way out of this slump and back into our good graces in the near future.

“When I go, this team goes a lot smoother.” so said Johnny Damon almost three weeks ago. They had yet to score more than four runs in a game at that point, though the team was heading into just the sixth contest of the season. For his part, Damon had been on the interstate since the second game of the year. Considering his sluggish start in 2007, you could tell he knew the critics were breathing down his neck.

He’s had some good games since then, but it’s not until the past three games that he’s really put everything together. He’s 7 for 14 with a walk in those contests, blasting two doubles and two home runs. He’s picked up is average to .253 and his OBP to .360 — if nothing else, a testament to the fact that it’s still early, and that anyone can turn it around.

It’s easy to write off Damon’s accomplishments as a small sample size. And if someone wants to do so, it’s tough to argue. But I can absolutely see this being a prelude to a solid season by Damon. And we’re going to need it. Because what he said about the team going smoother when he goes is visible in the team’s past three games.

The book on the Yankees is that they’ll make your pitchers work. However, we have not seen this early on in 2008. As a team, they have seen just 3.05 pitches per plate appearance, after seeing 3.88 last year. Derek Jeter is particularly troubling in his hacking, seeing a hair over 2.5 pitches in each of his 25 plate appearances. Clearly, this is something that will change as the season matures. But it does begin to explain the Yankees’ current offensive drought.

We saw this from the get-go yesterday. Johnny Damon hacked at the second pitch of the game, and Derek Jeter at the third. A-Rod swung at the first pitch of the second inning. Through two frames, James Shields had tossed just 17 pitches. This is not what we’re used to seeing from the Yankees.

Still, you’d like to see a bit more patience from the team in the next few games. This is quickly starting to feel like late April/May of last year, when the offense was underperforming and as a result pressing. They really seem to be lunging for balls out of the zone, and otherwise taking poor swings. There’s little left to say, other than: I hope they settle in and get into a groove.

Johnny Damon has the same idea: “When I go, this team goes a lot smoother.”

Well, then. Get to it, Johnny.