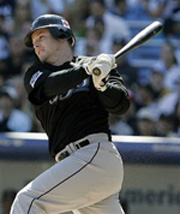 It was so close to happening last winter. The Yankees sought a right-hand-hitting first baseman, and Shea Hillenbrand was on the free agent market. So, you’d think this was a bada-bing, bada-boom deal, right? Well, unfortunately, Hillenbrand and his agent far overvalued his worth and demanded a two year contract. The Yankees declined and signed Doug Mientkiewicz, leaving Hillenbrand to sign with the Angels. Well, it’s nearly a half-year later, and Hillenbrand is on the verge of yet again becoming a free agent. It seems that the Angels have realized the errors of their ways, and are prepared to cut bait, giving Bill Stoneman 10 days to trade him, lest he become a free agent (he would almost certainly clear waivers). This is the Yanks’ big opportunity. They must sign Shea Hillenbrand.