Via Sweeny Murti: Retired third baseman Troy Glaus reached out to the Yankees about a potential comeback in the wake of Alex Rodriguez’s new hip injury. The team instead signed Kevin Youkilis to fill-in at third base. Cody Ransom, who filled in for A-Rod during his first hip surgery in 2009, reached out to the team as well.

Glaus, 36, hasn’t played since 2010 but is supposedly 100% physically after battling knee and shoulder problems late in his career. He had some monster years with the Angels in the early-aughts (including a league-leading 47 homers in 2000), though he finished his career by hitting .240/.344/.400 (104 wRC+) with the Braves in 2010 while playing first base because the shoulder problems prevented him from making the throw from third (also, Chipper Jones). The Yankees need a right-handed bat (preferably in the outfield) and if Glaus is willing to come to camp and compete for a spot as a non-roster player, I’d be all for it. There’s no way he should get a guaranteed contract though.

I can’t imagine many Yankees fans look back fondly on the Cody Ransom era. He was a late-season call-up in 2008, hit two homers and two doubles in his first four at-bats in pinstripes, then failed spectacularly in 2009 after getting a chance to replace the injured Alex Rodriguez on an everyday basis. Overall, Ransom posted a 97 wRC+ in 137 plate appearances for New York despite being declared a better fit for the team than A-Rod. It was a crazy time.

The now 36-year-old Ransom is back on the market after being designated for assignment by the Diamondbacks earlier this week. He hit four homers and put together a 148 wRC+ in 58 plate appearances for Arizona before getting the axe in favor of the younger Josh Bell. The Yankees are stuck with Jayson Nix as their utility infielder at the moment because Eduardo Nunez had to be sent to Triple-A for defensive incompetence, but Nix isn’t anything to write home about himself. There’s actually some merit to bringing Ransom back for an encore.

Since both guys are classic Quad-A types, we’re talking about a marginal upgrade at the 24th or 25th roster spot. Ransom has performed better in limited big league time (90 vs. 71 wRC+) and the two guys have nearly identical Triple-A track records, though Cody offers a little more power (.183 vs. 164 ISO) and on-base ability (8.8 vs. 7.6 BB%). The biggest difference between the two probably comes on defense, as Ransom is a true shortstop capable of playing the position for weeks at a time if need be. You can’t say the same about Nix, though he has the advantage of being able to play the corner outfield spots.

Anyway, I don’t want to waste too much time talking about a move that would be largely inconsequential. Ransom is not a guy you want in the lineup on an everyday basis but like Nix, he has a skillset suited for a big league bench. It’s just that Ransom’s skillset might be a better fit for the Yankees even though he’s seven years old than Nix and has already had one forgettable stint in pinstripes. Claiming him off waivers and dumping Nix would be a justifiable move but hardly a season-saver. If they pass, well that’s no big deal either.

Who's the better utility infielder option?

I know you were all worried, but our long national nightmare is over. Conor Foley reports that before last night’s Triple-A Scranton game, manager Dave Miley presented Cody Ransom with his 2009 World Series ring. Ransom was in town with the Lehigh Valley Iron Pigs, Philadelphia’s Triple-A affiliate. Last year’s Opening Day third basemen put up a sparkling .265 wOBA for the Yanks, and prior to the season some people actually thought he was a better option than Alex Rodriguez. I can’t seem to find that article online anymore, though.

So, how long until it ends up on eBay?

A few days ago, while I was away, Mike succinctly summed up my feelings on Cody Ransom. He might be able to jump high, but he’s not really a viable Major Leaguer. Shortly after that post, the Yanks designated Cody Ransom for assignment. According to Chad Jennings, Ransom has cleared waivers and will rejoin AAA Scranton with a minor league contract. Despite the Twitter love for him, no other team in baseball wanted a 33-year-old infielder with a 57 OPS+ and 25 strike outs in 86 plate appearances this year. While some fear we might see him again in the Bronx when rosters expand in three weeks, I don’t see the team clearing a space on the 40-man roster just to call up Ransom on Sept. 1. 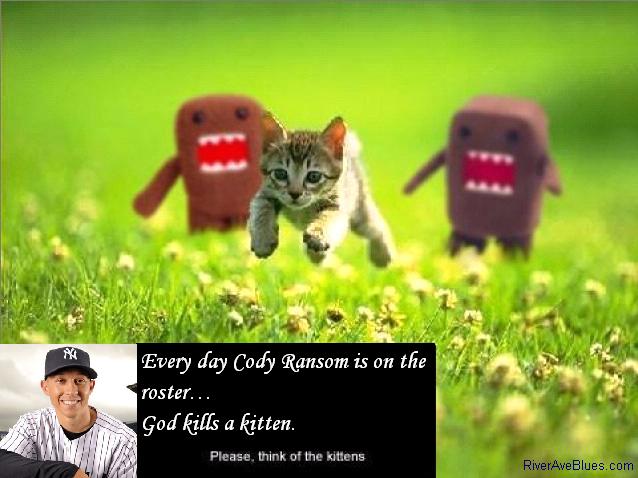 Let’s look at some numbers, shall we?

There is no reason for this man to occupy a spot on any team’s 25-man active roster. The fact that he is employed by the Yankees and is on their $201,449,189 payroll is an insult to my very existence. Roster spots are precious because they are limited, like outs in a game, yet the Yankees continue to waste one on this sorry excuse for a ballplayer and expect to survive in a division where efficiency and maximizing resources reigns supreme.

Get Cody Ransom of this team and away from a Major League ballclub.

PeteAbe, writing for his actual paper and not the blog, notes that injured outfielder Xavier Nady has been cleared to play in Extended Spring Training. Nady will (or did) begin playing today. I’m assuming that Nady will just DH for the time being, but it’s progress nonetheless. The Yanks begin the NL park portion of their interleague schedule on June 19th, and you can bet they want to have that extra bat available off the bench by then. Alex Rodriguez spent about ten days rehabbing (a far different injury) in EST before returning to the lineup earlier this month. So I’m hopeful that Nady can make it back in time for mid-June.