Got a bunch of injury updates, courtesy of Joe Girardi via Meredith Marakovits…

Got a few updates on the walking wounded down in Florida…

Right-hander David Aardsma threw sliders yesterday for the first time since having Tommy John surgery last summer. It was part of a 35-pitch bullpen session and he remains on track to be available to the team in August sometime. Based on the typical rehab schedule, Aardsma is about four-to-six weeks away from facing hitters and about two months away from pitching in game conditions. Since he’s a reliever and won’t need to build his way back to 100+ pitches, his minor league rehab stint figures to be a little shorter than usual.

Got a few quick updates on some injured and returning hurlers…

Last year we all expected the Yankees to go out and make a significant midseason move to bolster a questionable pitching staff, but that move never came. Starters Bartolo Colon, Freddy Garcia, and Ivan Nova performed better than expected while David Robertson and call-up Hector Noesi emerged to shore up the bullpen when Joba Chamberlain and Rafael Soriano went down with elbow injuries. Eduardo Nunez performed well enough off the bench that no outside help was needed when Derek Jeter and Alex Rodriguez missed weeks at a time with lower body injuries.

That was the exception and not the rule, however. Most contenders need to go outside the organization to improve their roster over the course of the summer, and the 2012 Yankees don’t figure to be any different. Before they do that though, the club already has a trio of pitchers due to return at various points of the season to help boost their staff. All the midseason pitching help they need could end up coming from within.

Andy Pettitte (May-ish)
I have to admit, I didn’t think I would be writing about Pettitte’s return like, a week ago. The veteran southpaw decided to give it another go though, and now he just has to get himself back into playing shape over the next few weeks before returning to the rotation. The Yankees were very clear about that last part as well, Pettitte will be in the rotation as soon as he’s ready. The plan calls for six or eight weeks of “Spring Training,” which will surely include some minor league starts to get ready.

There’s no way of knowing how a near-40-year-old pitcher will return after a year-long hiatus, especially in the AL East. There are reasons to be skeptical about just how successful Pettitte can be this season, though I don’t think he would go through all this trouble if he didn’t think he could get back to being the guy he was just two years ago. Whether he can physically be that guy is another thing entirely, but it’s also possible that the year off does his body good. I have a hard time betting against Andy, but it will be some comeback if he gives the Yankees four or five strong months.

David Aardsma (mid-August)
The forgotten free agent pickup, the Yankees signed Aardsma to a ridiculously cheap one-year, $500k contract with a $500k club option for 2013 about a week into Spring Training. The 30-year-old right-hander didn’t pitch at all least season because of a torn labrum in his hip and later Tommy John surgery. He has his elbow procedure in late-July but comments from the team last month indicate that mid-August is a more realistic target for his return.

The Aardsma signing is geared more towards next season, but he could definitely help late in the year assuming all goes well during his rehab. He started to harness his power stuff (averaged 94.0 mph with the fastball) after taking over as the closer in Seattle, though he’s always been a high strikeout (9.6 K/9 and 25.9 K% during his two years with the Mariners) and high walk (4.4 BB/9 and 11.8 BB%) guy. I wouldn’t be surprised if the Yankees extended his rehab a bit and didn’t call him up until the rosters expand on September 1st, but having a dirt cheap and experienced power bullpen arm in your back pocket for the late-season stretch drive sure is a nice luxury.

Joba was originally going to be included in this post because he was due to return from Tommy John surgery in mid-June, but that almost certainly will not happen following this morning’s news of his dislocated ankle. There is no timetable for his return just yet, and in fact they’re still awaiting test results to determine the full extent of the injury according to David Waldstein. Even if the Yankees hear the best possible news and there’s no further damage, they can’t count on Joba for anything this year. That’s a shame, and hopefully both Pettitte and Aardsma contribute a bit more.

3:30pm ET: The Yankees have officially re-signed Eric Chavez to a one-year deal, the team announced. Reports from last week indicate that the contract is worth $900k plus incentives. Chavez, 34, obviously passed his physical for the deal to become official, but it was more than routine given his injury history. He’ll back up both corner infield spots, serve as the primary left-handed pinch-hitter, and fill the designated in-season DL slot.

In a corresponding move, the Yankees placed David Aardsma on the 60-day DL. They currently have 39 players on the 40-man roster with Joba Chamberlain remaining a 60-day DL candidate. Pedro Feliciano was 60-day DL’ed to make room for Raul Ibanez last week. 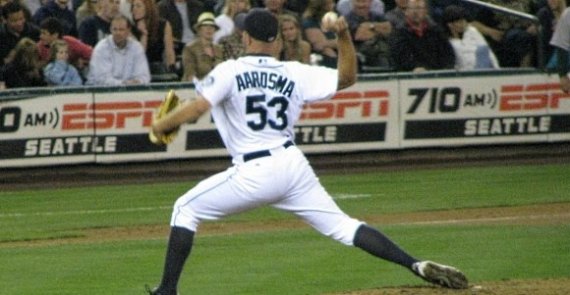 Bryan Hoch reports that the Yankees have signed right-handed relief pitcher David Aardsma to a MLB contract for 2012, with a team option for 2013. Aardsma, 30, missed the entire 2011 season due to hip and elbow troubles, though he didn’t undergo Tommy John surgery until July. That means he’ll be out until at least this July, meaning he could help the Yankees in the second half. The bigger part of the move, however, is the team option for 2013. That gives the Yankees one more in-house bullpen option, which could come in handy should Mariano Rivera retire and Rafael Soriano opt out of his contract.

Aardsma first made a splash in 2003, when he closed games for the College World Series Champion Rice Owls. He holds Rice records for both single-season and career saves. From there it was onto the MLB draft, where the Giants selected him number 22 overall in 2003. He threw 18.1 innings for their advanced-A club that year, dominating the competition — he struck out 28 of the 74 batters he faced. Following the season Baseball America ranked him the Giants’ No. 3 prospect, one spot behind Matt Cain.

Things get a bit confusing here. Baseball America says that at Rice he ditched his slider for a knuckle-curve, and that his changeup is “major league-ready.” Yet Baseball Info Solutions data suggests he barely used either his changeup or his curve, instead opting for a slider. Pitch f/x, once introduced in 2007, confirms that he’s mainly a fastball-slider guy, with some splitter mixed in. Classification issues make it tough to determine how frequently he has used the splitter in the past; before 2010 many splitters were lumped in with his fastballs, but in 2010 he threw the splitter about 13 percent of the time.

As is the case with so many highly ranked prospects, Aardsma struggled out of the gate. His 10.2 innings in 2004 went about as poorly as possible; in those innings he walked 10 and struck out five. He did continue striking out a fair number of hitters in the minors, about one per inning, though his control remained an issue. In 2005, after seeing his strikeout rate dip below six-per-nine at the AA level, the Giants dished him to the Cubs in exchange for LaTroy Hawkins. While his strikeout numbers rose in the Southern League, he control problems lingered.

In 2006 Aardsma would return to the bigs. He was intriguing in ways, because he found ways to strike out batters. Unfortunately, he also walked far, far too many. A high strand rate saved him in 2006, but when that started to dip in later years his ERA suffered greatly. From 2006 through 2008, during which time he pitched for three different teams, he sported a 5.17 ERA. Despite striking out exactly one batter per inning during that span, he could not maintain a decent strikeout-to-walk ratio, putting 80 men on or free — 75 of them unintentionally. He was also incredibly hittable in that period, allowing almost a hit per inning. Combined with the walks, it was easy to see why, despite his strikeout tendencies, he just couldn’t keep runs off the board.

Before the 2009 season the Red Sox traded Aardsma to the Mariners for some forgettable minor leaguer. Something apparently clicked during his time in the Pacific Northwest. Last winter Matthew Carruth of Lookout Landing examined what changed with Aardsma when he came to Seattle. It wasn’t necessarily the huge park, though that surely helped a bit. Instead, Aardsma apparently focused on his fastball more, challenging hitters up in the zone and generating some more swings and misses. Pitching higher in the zone led to plenty more fly balls, but he did keep them in the park (even against lefties, who do not have nearly as hard a time as righties at Safeco).

For a $500K guarantee, the Yankees essentially made a mid-season bullpen acquisition. True, with Joba Chamberlain returning ahead of Aardsma, the bullpen could be full. But that’s only if nothing goes wrong. Aardsma provides some mid-season insurance. Still, he might not be all the way back from surgery. Since control is the last thing to come back after Tommy John, he could be pretty rough around the edges in 2012. That’s why the Yankees got a 2013 club option. If he shows flashes of his 2009 and 2010 self, the Yankees can keep him around to help the 2013 bullpen.

It’s odd to see the Yankees hand out a major league contract to a pitcher who missed all of 2011 with elbow woes. But, given the ease with which they can add Aardsma to the 60-day DL, it doesn’t make a huge difference. They can keep his 40-man roster spot free whenever they need it. In fact, he’ll probably hit the 60-day DL once the Eric Chavez signing becomes official. While there’s risk involved in the signing, it’s at a low level. The payoff can be huge, especially for the 2013 team.