Via Bryan Hoch, Joe Girardi confirmed that Dustin Moseley will start against the Indians on Thursday in his pre-game press conference. Sergio Mitre will resume working out of the bullpen after apparently losing his job in his first start off the disabled list. Can’t say I’m expecting much out of Moseley, but let’s just hope for the best.

Update (11:46pm): Cashman made it official, Moseley called up in favor of Logan. He says other teams had contacted him about Moseley, so he knew he was going to lose him if they didn’t add him to the roster.

10:00am: Via Marc Carig, the Yankees have finally recalled righty Dustin Moseley from Triple-A Scranton, optioning Boone Logan down to make room on the 25-man roster. There was an empty spot on the 40-man, so no move had to be made there. Moseley would have been able to opt-out of his contract yesterday if the Yanks didn’t add him to the big league roster, so I assume the team assured him he’d be called up today to prevent him from leaving. I don’t expect much, a few mediocre innings of long relief and an eventually DFA, but with the open 40-man spot and Logan having options left, there was no sense in sacrificing depth.

Via Mark Feinsand, righthander Dustin Moseley will be called up to join the Yankees sometime before Friday’s game against the Blue Jays. It’s unclear who will get the axe, but my money’s on Chad Gaudin, especially throwing 48 pitches tonight.

The 28-year-old Moseley would have been able to opt out of his minor league contract if he wasn’t added to the roster by July 1st, which of course is tomorrow. He put up a 4.21 ERA (~3.50 FIP) in a dozen Triple-A starts, generating his usual high percentage of ground balls (59.4%). In 168 IP spread over four seasons with the Angels, Moseley posted an unspectacular 4.61 xFIP. I don’t expect much out of him, but there’s no harm in seeing what he has to offer when we know all that Gaudin brings is mediocrity (at best).

Sometimes your options are so poor that it really doesn’t matter what you do. That’s the situation at the back of the Yankees’ bullpen right now. Chan Ho Park, Chad Gaudin, and Boone Logan have provided so little value that, in theory, you could call up a random AAA reliever to replace them and you’d realize equal, if not better, results. That appears to be just what the Yankees will do. By all appearances, Dustin Moseley will join the team tomorrow at the Stadium.

We learned yesterday that Moseley has an out clause in his contract that allows him to elect free agency if not on the 25-man roster by July 1. Last night he was scheduled to make his final start before that date, but as Donnie Collins reported in the early evening, Moseley would not make his start. Collins went on to confirm that the move did not involve an injury, and later that Moseley was throwing in the bullpen. That sounds like we’re just an official announcement away from seeing Moseley join the team.

That means the Yankees will have to jettison one of those three underachievers. Since they have a 40-man roster spot free they could simply option Logan and let that be that. That way they could keep both Gaudin and Park on the major league roster while stowing away Logan for depth. It sounds like the most likely move from a GM who covets his depth. But at this point I’m not sure it’s the correct move.

What, exactly, do the Yankees think they’re going to get from Chad Gaudin? Pick a stat, either results- or peripheral-based, and you’ll see nothing but dreck. ERA: 6.89, FIP: 6.10, xFIP 4.57, tERA 5.96. Oh, he has a 3.84 SIERA. His numbers have improved a bit since joining the Yankees, so maybe he’s not a total waste. But that doesn’t mean the Yankees have to keep him around. They can try to do better than simply not a total waste.

Now seems like as good a time as ever to start sending the bullpen cart to Scranton and picking up random relievers for auditions. Moseley starts on Tuesday. Albaladejo figures to get a shot soon enough, probably at the expense of Park or Logan. Moseley will get a few chances, and a lack of success will lead to his release, only to be replaced by someone like Romulo Sanchez or Jason Hirsh. Better to find out what they have now, rather than try to deal for someone at the deadline when there’s an answer right under their noses.

Will Moseley, or any of these guys for that matter, prove the answer to the Yankees’ bullpen issues? Probably not. But chances are they won’t provide a necessarily worse option than Park or Logan or Gaudin. At this point there isn’t really a reason for Gaudin to be on the team. Someone will have to go, regardless, when Sergio Mitre returns from his DL stint. Why not DFA the guy who will be DFA’d at some point anyway? At least that way Girardi will get to keep his coveted double-lefty tandem.

6:17pm: Moseley has been scratched from tonight’s start, so something’s up. As the turntables … turn.

5:30pm: Via MLBTR, Triple-A Scranton righty Dustin Moseley has a clause in his contract that will allow him to become a free agent if he isn’t added to the team’s 25-man roster by July 1st, otherwise known as this Thursday. These clauses are common, because no one in their late-20’s wants to be stuck in some team’s minor league system when another club might be willing to give them a real chance at a big league job.

Moseley has pitched to an unspectacular 4.21 ERA (~3.50 FIP) in a dozen starts for SWB, generating close to 60% ground balls (59.4%, exactly). He has struck out ten in two of his last three starts, and is scheduled to take the mound tonight. Clearly, if the Yanks were to call him up, it would be as a long man out of the bullpen. Would they be willing to eat some money, cut ties with either Chad Gaudin or Chan Ho Park, and gamble on the former Angel? Hard to see it happening, but it’s always possible. They also have the option of trading him before then.

10:41am: Via Bryan Hoch, the Yankees have assigned righty Dustin Moseley to minor league camp, which comes as a surprise to no one. He allowed eleven hits and seven runs in 6.1 innings this spring, but I don’t think he would have been able to make the team even with a phenomenal spring. They probably just would have traded him while his value was high.

Moseley may have some kind of out clause in his contract, but I suspect he’ll fill a middle relief/swingman role for Triple-A Scranton. You always need guys like that in the minors, just to soak up inning when the kids take a beating or the weather makes thing messy. 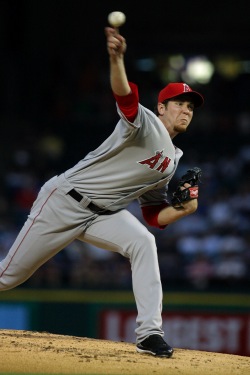 Spring Training non-roster invitees don’t normally amount to anything. The Yankees have invited dozens over the years, only to see them spend the year in the minors, or, if they have an out clause, catch on with another organization. Even the ones who do head north with the big league team, like Morgan Ensberg in 2008, don’t always stick around all season. The Yankees have invited a pair of former high draft picks to camp, 2002 first rounder Royce Ring and 2003 second rounder Jason Hirsh, and yesterday announced that they’d also bring along 2000 first rounder Dustin Moseley.

The newest invitee spent the last four seasons in the Angels organization, breaking camp in the rotation over the past three years. He never stuck, though, moving between the minors and the bullpen after April. The Yankees faced him four times, twice as a starter, in fairly unremarkable games.

In the 2000 amateur draft the Reds selected Moseley with a supplemental first round pick, 34th overall. He didn’t sign until November and so didn’t see any professional action that season. Still, Baseball America ranked him the Reds No. 7 prospect for the 2001 season. In 2002 he moved up to No. 5, where he remained for 2003. In 2004 he peaked at No. 4 in the organization.

His results in both 2002 and 2003 warranted the ranking. While he posted unspectacular strikeout rates, and saw those rates fall as he climbed the minor league ladder, he stuck to what he does best: keeping the ball on the ground. That, in turn, kept the ball inside the ballpark. Combined with a serviceable walk rate, it led to low ERAs for Moseley as he worked through A+ and AA ball in 2002, and then AA and AAA in 2003.

For the second straight year, in 2004, he split the season between AA and AAA. I don’t have the game logs, but I wonder if this is akin to Jeff Karstens’s 2006, where he started in AAA, pitched poorly, dominated AA, and moved back up. His 1.56 WHIP at AAA suggests that might be the case. After the season the Reds traded him to the Angels for Ramon Ortiz, who went on to get hammered at Cincinnati’s hitter-friendly park.

Moseley didn’t make Anaheim’s Top 10 in 2005, mainly because they had a stacked system. Injuries limited Moseley to just 80 innings that year, and in that short span the Pacific Coast League took its toll. Whenever discussing the PCL, I find it necessary to mention that Bubba Crosby posted a 1.046 OPS there in 2003. Moseley allowed 11 home runs in his 80 innings, a far greater rate than he’d allowed in his career to date. He recovered a bit in 2005, bringing his home run rate back to his career norms and generally keeping the ball out of the air. His 4.68 FIP looked good in the PCL, and earned him a brief July cup of coffee before a September call-up.

In 2007 and 2008 Moseley broke camp in the Angels rotation, but didn’t last long either year. He stuck around in the bullpen in 2007, pitching 92 innings between eight starts and 38 relief appearances and posting a 3.98 FIP, mostly because of his low home run rate. When that took a jump in 2008, Moseley suffered. It also didn’t help that he allowed 70 hits in 50.1 IP. An forearm injury divided his season, landing him on the DL in early May. He came back to make a spot start in July, and then disappeared to the minors, not to return until rosters expanded. His 120.1 minor league innings went pretty horribly, resulting in a 6.94 ERA against a 5.62 FIP.

John Lackey’s elbow injury cleared Moseley for another rotation stint, though this one lasted only three starts. He left his April 17th start with an elbow injury that landed him on the DL. Hip surgery in August ultimately ended his season. Between his last start and his hip surgery, he also experienced nerve problems in his neck. The Angels declined to tender him a contract in December, making him a free agent.

Clearly, the Yanks can’t expect much from Moseley. Even if he pitches to his 2007 level, he’s bullpen fodder at best. The Yankees seem to be full in that department, so if Moseley stays with the organizations he’ll have to start in Scranton, joining Zach McAllister and Ivan Nova. Perhaps he’d provide an experienced depth option, but with the arms the Yankees have accumulated over the past year, including fellow NRI Jason Hirsh, it doesn’t seem likely that Moseley dons the interlocking NY in 2010.