One way to define an outlier is one observation that deviates in a notable manner from the other observations in a sample. Here’s a graph of Robinson Cano’s on-base percentage throughout his career graphed alongside league average on-base percentage. See if you can spot the outlier(s): The league average sits right below .350 in this sample. For Cano, the outliers here appear to be 2008, a year in which he posted a typically low walk rate and an abnormally low BABIP, and last year, a year in which he doubled his career walk rate and posted a relatively normal BABIP by his standards. To cut down on the effect BABIP can have on on-base percentage, here’s a graph over time of his walk rate. Again, see if you can spot the outlier(s): This one’s even easier to pick out: the outlier is 2010. Unfortunately, the purple line here is league average walk rate and the green line is Cano’s walk rate. As mentioned above, Cano doubled his walk rate last year en route to a .319/.381/.534 line. At the time it looked like a big step forward for a young developing player entering his prime. This year it’s right back where it always has been, below 5%.

Many times it’s common to hear fans or announcers get frustrated with pitchers who can’t throw strikes and struggle with command. “Just throw strikes” is a common refrain, as if control and command were mere switches one simply flips on or off depending on concentration. For some this may be the case, for others it’s a question of ability. Certain pitchers, for whatever reason, aren’t good (by MLB standards) at directing the ball where they want it to go.

It’s similar with batters, and with Robinson Cano. Pitch recognition and plate discipline are things that one can get better at, true. Kevin Long seemed to attempt to infuse Cano with plate discipline earlier in the year by instructing him to stop swinging at the first pitch, advice which Cano disregarded. This is a frustrating state of affairs, but perhaps some of the frustration can be ameliorated by simply accepting that Robinson Cano isn’t very good at showing discipline at the plate.

Cano is 28 years old and he’ll turn 29 this October. A 5% walk rate is the norm for Cano at this point in his career; the 8.2% mark in 2010 appears to be the outlier. Barring him developing new skills, it appears that Cano’s on-base percentage will fluctuate between .330 and .380 as his BABIP fluctuates. It sure would be nice if he would develop some patience to complement his incredible power; it likely make him the best second baseman in the game. Yet it doesn’t seem likely to happen and that’s a shame, because it does represent a hole in his game. But hey, there are worse things in the world than having Robinson Cano as your second baseman, walk rate and all. 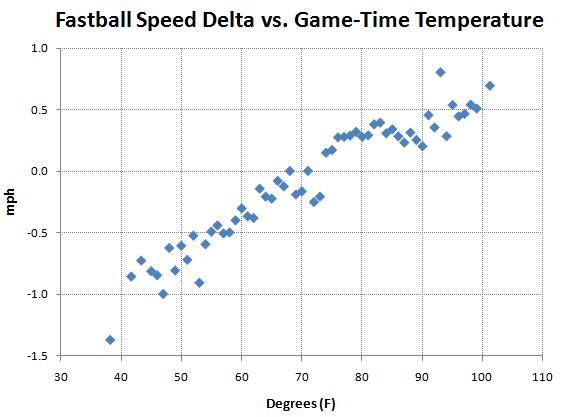 PitchFX guru Mike Fast posted a gem yesterday (no subs. req’d), looking at pitch velocity versus temperature. Surprisingly, at least to me, the relationship between fastball velocity and game-time temperature is pretty linear, with velo increasing by one mile an hour for every 37-degrees (or so) according to Fast. This graph shows that fastball velocity gradually increases early in the season before peaking in July in August, and the change is not insignificant. We’re talking about a difference of 1.5-2.0 mph from March/April to July.

Fast acknowledges that the study isn’t perfect, as adjustments for specific pitch types (two-seamer vs. four-seamer, etc.) and climate are needed, but the early data suggests that there is substantial correlation between fastball velocity and the weather. So yeah, stop sweating March/April radar gun readings. It’s been more than two years since I implored the Yankees to look into Nick Swisher as a potential buy-low option, but of course I was talking about adding him as a first baseman since it looked unlikely that Mark Teixeira was coming to New York at the time. Anyways, you all know what happened next; Swish has gone on the enjoy two tremendously productive seasons with the Yankees since then, but just how productive compared to the rest of his career?

Bill Petti of Beyond The Box Score examined Swisher’s year-by-year park adjusted OPS totals (which is what you see above), and showed that the Yankees’ right fielder hasn’t really taken his offensive game to another level over the last two seasons. He just rebounded from his hideous 2008 season with the ChiSox to perform like he had with the Athletics in 2006 and 2007. Go figure.

OPS, even adjusted, isn’t the best metric, but for quick and dirty stuff like this it’s perfectly fine. Swisher has posted a .376 wOBA with 7.4 fWAR over the last two years compared to a .364 wOBA with 7.2 fWAR with Oakland from 2006-2007, so the difference is negligible once you consider just how inexact some of this stuff is. It’s pretty obvious that his 2008 season was nothing more than an unfortunate fluke, but I still blame Ozzie Guillen. After breaking down Baseball America’s top 100 prospects lists by determining the value of each spot, Scott McKinney of Beyond The Box Score looked at how long it took prospects to have their first league average season (defined at 2+ WAR) in the majors. The majority of both pitchers and position players have that first average season in their sophomore campaigns, though a significant amount of players (27.3%) reach that level in their third season, and another 27.7% reach it in their fourth season or later.

The average call-up age for both position players and pitchers is just 22.7 years of age, which surprised me. I thought it would be a little higher, maybe 23-24. It turns out that age isn’t an important variable either, a player will still have his first league average season two years after he debuts regardless of how old he was when he got to the show. Unsurprisingly, high-end prospects (ranked 1-40 on BA’s lists) tend to contribute a little earlier than lesser guys, but not by a whole lot.

The Yankees have a few high-end prospects on the cusp of the big leagues, most notably Jesus Montero. Recent history suggests that his coming out party might not occur until 2012 though, and I can’t help but wonder how many Yankees fans are willing to be that patient. My guess: fewer than you think.

Over the last three years, A.J. Burnett has hit 38 batters with pitches, the most in baseball. Twenty-one of those 38 batters were left-handed, or 55.3%. Right-handed pitchers around the league have about a 68%/32% split (RHB/LHB) on hit-by-pitches during that time, so Burnett’s clearly an outlier in that regard.

Those two heat maps above come courtesy of David Pinto at Baseball Analysts, and they show the general location of the pitches that have hit left-handed batters over those last three seasons. The graph on the left is the league average, the one on the right is Burnett. He’s not hitting these batters up high (around the shoulders, arms, and hands) like everyone else, he’s catching them down around the feet and ankles. Why? It’s the curveball, as Pinto shows in his post.

Thirteen of those 21 hit-by-pitches came with two strikes, which is why A.J. really goes to the hook. Hitting a batter is bad enough, but doing so in a two strike count is as infuriating as it gets. Hopefully those new mechanics get help straighten Burnett out, because free baserunners are a bad, bad thing.

Hitting coach Kevin Long spoke yesterday about the changes he and Derek Jeter are making to the Captain’s swing, specifically with regards to the inside pitch. “The issue with the stride foot is when it crosses over and goes [toward the plate] and the ball is coming inside, you don’t have a path to get to that pitch,” said Long. “So he’s going to try to [keep his hands and body inside] and try to stay into it … Now, by staying square and going up on his toe and going [inside with the swing], he’s creating an avenue for his hips to get through and to become square to the baseball.”

The two heat graphs above show Jeter’s foul balls over the last two years, with 2009 on the left and 2010 on the right. They come courtesy of Dave Pinto at Baseball Analytics, and allow us to see that the inside pitch was giving the Cap’n a hard time last year. Instead of putting those balls in play like we’re so used to seeing, he was just fouling them off. Assuming the adjustments work, the bulk of the foul balls should come on pitches on the outer half in 2011. There’s no better PitchFX analyst than Mike Fast, and today he used to the data to look not at pitchers, but catchers. The graph above shows Javy Vazquez’s called balls and strikes from last season when Frankie Cervelli was catching. It’s not terribly exciting by itself, but it is when you compare it to this graph that shows the same thing with Jorge Posada behind the plate (here’s a gif for easy comparison). Yeah, big difference. Jorge’s pitch-framing abilities have long been in question, but now we’ve got some hard evidence showing just how questionable they were.

Of course, we are looking at a small sample size of data, let’s keep that in mind. Cervelli caught 110.2 of Javy’s innings last year, Posada just 44.2. And we also have to remember that umpires tend to make mistakes, especially when they’re looking over the catcher’s shoulder and the ball is on the corner of the other side of the plate. I’m not making excuses for Jorge, because he’s bad at pretty much everything behind the plate these days, just making sure you’re aware of what’s going on. Anyway, Posada’s not going to do much catching this season, so it’s no longer a concern.

My favorite graph from the post was this one, showing pitch location (horizontally) by age. The older the pitcher, the further away from the middle of the plate they pitch (denoted as 0). If only they knew then what they knew now, eh?

The article does not appear to require a Baseball Prospectus subscription, so now you really have no reason to check it out. Great stuff from Mike.