On Thursday, I noted that the Yanks are listening to offers for Nady, and Joe talked about trading Nady for Aaron Harang. On Wednesday, the rumor du jour concerned Randy Winn. While a little over a week 55 percent of RAB voters said don’t trade Nady, his name just keeps on popping up in trade rumors.

Today, we have both the Giants and Pirates involved in various talks over Xavier Nady. The first story comes to us via The Splash, Henry Schulman’s San Francisco Chronicle-hosted Giants blog. He writes, “I’ve been told by a good source that Yankees GM Brian Cashman wants to keep Swisher to replace Bobby Abreu in right field and deal Nady, who becomes a free agent after the 2009 season.”

Schulman goes on to speculate that the Giants could be interested. However, he’s just guessing and has no further information concerning the team’s interest.

Meanwhile, the Pirates seem to be talking Nady and Swisher with the Yanks. Dejan Kovacevic reports:

The Pirates have had trade talks with the New York Yankees regarding outfielders Nick Swisher and Xavier Nady, one high-level source said today, but there is little cause to expect a deal involving either coming to Pittsburgh.

In Swisher’s case, he is owed $22 million the next three years and is coming off a down season in which he batted .219 with 24 home runs and 69 RBIs. Moreover, the Yankees are seeking pitching, the Pirates’ most precious commodity, so the match is poor. The source described the chance of a Swisher deal being done as “a long shot.”

A Nady deal is seen as even less likely, and the talks on that front have been no more than cursory. The primary reason is that the Yankees never could get back as much as they gave up for Nady and reliever Damaso Marte in the teams’ July 26 trade — outfield prospect Jose Tabata and starters pitchers Jeff Karstens, Ross Ohlendorf and Daniel McCutchen — and that could make for an awkward set of circumstances.

So we have some conflicting information, and some sense of what the Yankees are expecting. It’s worth noting that the Kovacevic is the latter of the two. Perhaps the Yanks are willing to listen on Swisher even if they would rather keep them. A Front Office conducting its due diligence would be better served hearing everything another GM has to say about any player.

Meanwhile, I’m not sure I agree with Kovacevic. If the Yanks are, as Schulman says, so keen on moving Nady, they may view him as the lesser of the two pieces from last summer’s trade. They seem to recognize that Nady had something of a career year last year, and Brian Cashman, in looking to move Nady, seems to be betting on the belief that Nady won’t duplicate his 2008 number. He wants a decent package for Nady and needs to replace some of the parts they sent to Pittsburgh last year. It is unreasonable to expect to get a full return though.

Either way, these talks were very cursory, and at the risk of sounding like a broken RAB record, I still predict Nady to be with the team come April.

Join Jon Heyman to the growing list of national baseball columnists proclaiming Nick Swisher and Xavier Nady expendable. In a recent post, Heyman notes that the two outfielders could be available for the right price, but more notable is his note on Johnny Damon.

The Yankees are fielding trade offers for corner outfielders Xavier Nady and Nick Swisher. There’s been some speculation they might consider trading Hideki Matsui, too, but he has a full no-trade clause and is coming off knee surgery, so there’s really no way to trade him…

Johnny Damon isn’t in the trade mix, as the Yankees need him to be their leadoff hitter and part of a center field rotation. The other in-house candidates for center field are Melky Cabrera and Brett Gardner.

So here’s what doesn’t make sense. Hideki Matsui just isn’t a viable outfield candidate. Even if his knees could take the daily wear-and-tear, his range is a huge negative. So if the Yankees are planning on going with Damon in center field, that would leave whichever of Nady and Swisher aren’t traded to man right field and…no one…to man left field.

Now, the idea of Damon in center makes most Yankee fans queasy. He’s a very good left fielder, but his range in center is a big diminished. I’m not even going to mention his limp noodle arm. Meanwhile, most of us are quite content with giving Brett Gardner a shot in center field, but there’s a real chance that he just doesn’t have the bat to succeed at the Major League level. It’s tough to say how committed the Yankees are to that idea though.

Considering that the Yankee outfield is a huge question mark for 2010, the team has no real need, as we’ve been saying over and over again, to trade Nady or Swisher. If they get a great offer, of course they should consider it. But for now, both players have roles on the 2009 Yankees, and my money is on the team breaking camp in April with both Xavier Nady and Nick Swisher in tow. 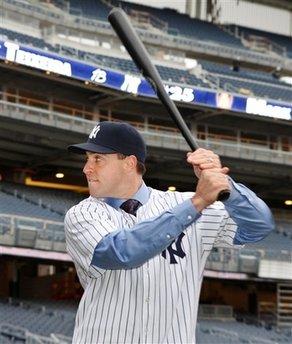 Check it out. Matthew Walker, the designer/webmaster of CC’s site – and Nick Swisher’s too – sent along a note mentioning that the CC’s redesigned site has launched. So yeah, I think it’s safe to say he’s a Yank. Make sure you stop by!

ESPN.com baseball scribe Jerry Crasnick is reporting that the Yankees have acquired Nick Swisher in a trade with the White Sox. The Yanks have sent at least Jeff Marquez to Chicago. It is unclear if anyone else will be included in this deal.

According to Ken Rosenthal, the White Sox will send Kanekoa Teixeira to the Yanks while Wilson Betemit & Jhonny Nunez are heading to Chicago. Teixeira, not the one I hope the Yanks land before the winter is out, put up some good numbers in relief this year but at the A level.

Right now, this acquisition is a great move for the Yanks’ roster. While Mike predicted it early last week, Swisher’s role on the 2009 Yankees is still up in the air, and that is perfect. He gives the Yanks a lot of roster flexibility. He could be in the center field mix; he could be one of the corner outfielders (and thus we would be waving farewell to Bobby Abreu); he could wind up at first base. I’d still, of course, rather see Mark Teixeira land there.

Swisher had a down year last, hitting just .219 but still managed a .332 OBP and a .410 SLG. As Mike noted last week, his numbers suggest a season of bad luck. Swisher is a power threat and an on-base machine who gives the Yanks some much-needed youth.

Marquez is a 24-year-old right-hander with some pedestrian MiLB peripherals. While the sinker-slider specialist was once on BA’s Top 10 list for the Yanks, he hasn’t made the steps the experts expected and doesn’t project very well right now in the Bigs. It’s hard not to love this trade.

Update by Mike (4:15): In case you don’t feel like reading back through the post, the deal is Swisher & Kanekoa Texeira for Marquez, Betemit and Jhonny Nunez. Good deal. The Depth Chart has been updated.

At MLBTR last night, Tim linked to a post by Ken Davidoff – blogging MVP of the GM Meetings – mentioning that the Yanks & ChiSox have had “extremely preliminary” talks about former Moneyball draft pick Nick Swisher. The soon-to-be 28 yr old is coming off the poorest season of his young career, a season in which he hit just .219-.332-.410 in nearly 500 at-bats. With strong competition expected for Mark Teixeira’s services, Swish represents a possible Plan B for a first base.

Carlos Quentin & Jermaine Dye are locked into Chicago’s corner outfield spots, and Paul Konerko & Jim Thome fill the first base & DH spots, meaning Swish is seemingly a man without a position. Even though he could play centerfield in a pinch, he’s not equipped to man that spot on a full-time basis. He’s played first more than any other position in his career, committing just 10 errors in over 1,660 total chances (.994 fielding %) at the first sack.

Despite the down season, Swish still did what he does best in 2008: get on base. His 82 walks were good for eighth in the league, and he led the majors by a significant margin with 4.51 pitches seen per plate appearance. Take a second to get your head around that number. Never one to hit for a high average, Swish’s line drive rate (20.9%) was the best of his career in 2008, but his .251 BABIP was a career low, suggesting that his .219 batting average may have been the product of some plain ol’ bad luck. His IsoP was down a touch to .191, but he still managed to send 24 balls into the people. A switch-hitter, Swish hits for more pop from the left side, but hits for a higher avg from the right.

Drafted one pick after Scott Kazmir and one pick before Cole Hamels in 2002, Swisher’s tool set is still a desirable one despite the down year. More athletic than he looks, Swish’s defense doesn’t compare to Teixeira’s, but he’s very good at first and adequate at the three outfield spots. Anyone who saw him during his time in Oakland knows he’s a great clubhouse guy (I didn’t see him much with the Sox, so I can’t speak to that), always the first one on the top step to high-five a teammate after a big hit. He would provide the Yanks a great deal of roster flexibility, capable of staying in the lineup at another position if, say Juan Miranda gets hot for two weeks.

So what would it take to get Mr. Swisher? I have no frickin’ idea. Kenny Williams is rumored to be on the lookout for a centerfielder/leadoff hitter, and presumably pitching. Johnny Damon might be a candidate to head to the South Side, but that would open up a hole in the outfield to fill a hole on the infield. A straight one-for-one deal is unlikely. Swisher’s contract is reasonable (he’s locked up for $21.05M total over the next three years w/ a $10.25M option or $1M buyout for 2012), and unlike Xavier Nady this summer, the Yanks would be buying low on the former Ohio State star.

Teixeira might be the sexy name, but Swish offers the same on-base skills from both sides of the plate while still providing a good amount of power and above-avg defense, all without the hassle of Scott Boras and a nine-figure contract negotiation. He hasn’t been on the disabled list since a shoulder issue sidelined him for three weeks during his rookie season, and I’d be remiss if I didn’t point out that he has a plus-plus girlfriend. What do you think, seems like Swish would be a solid buy-low candidate, right?