Here’s an unlikley scenario that I pulled out of mowhere over Christmas break: The Washington Nationals already have three of the first 34 picks. They don’t have a second rounder. What if the Yankees worked out a sign-and-trade with them for Soriano? The Nationals would only be surrendering the 86th pick for him, and the Yankees could easily make up for that (and some) with a guy like Phelps/Mitchell/Warren, right? This way, the Yankees get to keep their 31st pick in a stacked draft, secure one of the best relievers in MLB for about 4 prime years, and trade from a position of depth (SP/C?). Seems like a decent fit for both sides. What do you think?

This idea reminds me of Juan Cruz’s situation two winters ago. He had pitched very well for the Diamondbacks in 2008 and was labeled a Type A free agent. But, because of his inconsistent track record teams weren’t willing to surrender their first unprotected pick. And so he languished on the free agent market well into February. At one point a sign and trade was discussed, though it was quite a bit different than what is suggested above.

The idea two years ago was that the Diamondbacks would re-sign Cruz and then trade him to another team. They wouldn’t get a draft pick in return, since they re-signed their own player. But they would receive a player, or players, from the team that eventually got Cruz. That package wouldn’t be equal in value to an unprotected pick, or else the the receiving team would have just signed him straight up. But it would provide Arizona something. That situation never developed, though, as Royals GM Dayton Moore bailed out everyone by signing Cruz to a two-year, $6 million contract.

With Soriano the situation is a bit different. He’s clearly a better pitcher than Cruz, and I’m sure that eventually a team will surrender its first unprotected pick in order to sign him. More importantly, in the above scenario the Rays would be getting absolutely screwed. They would lose their best reliever to a division rival and not even get their first unprotected pick. They’d instead get Washington’s first unprotected pick, which, again, will be somewhere around No. 90 once all the free agents sign. If Washington straight up signed Soriano there’s nothing the Rays could do. But if it’s a sign-and-trade I can see the complaint board at the Commissioner’s Office lighting up.

Let’s just pretend for a second that all involved parties approve this. Let’s say the Nats would rather have a AAA player than the 86th pick in the draft. Let’s say that they won’t use Austin Romine, the 90th pick in the 2007 draft, as a reference point. Let’s say that the Commissioner’s Office ignores the Rays legitimate complaints and allows the trade to move forward. Would the Yankees want to sign Soriano at that point?

While draft pick compensation acts as a tax, the removal of that tax does not necessarily make Soriano a better bet. He’s still a relief pitcher with an injury history:

There are downsides to signing Soriano, of course. First, he’s going to command a multi-year, big money contract. We know that relievers are volatile creatures, and while Soriano has been relatively consistent throughout his career, he’s still susceptible to random fluctuations. His health is also somewhat of a concern. After his Tommy John Surgery he missed time in 2008 with further elbow troubles.

There are upsides, of course, not least of which is Soriano’s ability to step in for Mo after the latter retires. But does that potential advantage outweigh the massive risk that is giving four years to a reliever with an injury history? I’m leaning no. The Yankees have plenty of money available this off-season, and I think they should use every penny in order to improve the 2011 team. But when they start adding money to the 2012, 2013, and 2014 payrolls is when I start to get a bit wary. They still have a lot of money committed to those years, and to add potentially dead money to those years will only make things worse.

Removing the draft pick compensation — or at least making it a bit more palatable a sacrifice — definitely makes Soriano a more attractive option for the 2011 bullpen. The Yanks have quite a few question marks with the starting staff, so adding another high quality reliever can help Joe Girardi and Larry Rothschild balance everyone’s workload if the bullpen is needed more frequently than in years past. It’s the implications this has for future years that has me leaning no on the issue. I wouldn’t be upset if the Yankees did this, though it sounds like an impossible scenario. But it’s also not a move I would actively pursue.

Update (5:57pm): So much for that, Buster Olney says the Yanks are no going after Soriano after all. Unsurprising to say the least. Meanwhile, Kerry Wood agreed to sweetheart deal with the Cubs that will pay him just $1.5M for one year. He turned down $3.5M from the White Sox, and a source told Feinsand that the asking price to return to the Yankees was much higher. I guess he just really wanted to go back to the Cubbies. What can you do.

(3:32pm): Via Mark Feinsand, the Yankees are “exploring” the possibility of signing free agent reliever Rafael Soriano, having preliminary discussions with his agent Scott Boras. Joe laid out the case for signing him just this morning, but I’m not terribly fond of surrendering a first round draft pick for a reliever no matter how good he is. Feinsand’s source says that while the Yankees aren’t willing to meet any asking price, though they are comfortable paying him more than they would have Kerry Wood.

Bobby Jenks just came off the board as well, agreeing to a deal with the Red Sox. Oh well, I expected him to end up in Tampa anyway.

Via Joel Sherman, the Yankees have contacted the agents for about a dozen free agents, though we don’t know exactly which ones. Well, we know about Cliff Lee and Pedro Feliciano, then there’s Derek Jeter and Mariano Rivera. Does Andy Pettitte count? Probably. Sherman mentions that they’ve also checked in on Rafael Soriano, so that’s half the group right there. I suspect the others were just part of due diligence, backup plans and backup backup plans. It certainly doesn’t seem like any significant moves are coming, but remember, Brian Cashman is a ninja.

Check out the rest of Sherman’s column for some more dope on Soriano, who the team views as strictly as a backup plan should Rivera not re-sign for whatever reason. He adds that teams have called the Yanks about Brett Gardner, Curtis Granderson, and/or Nick Swisher, but right now they have no motivation to move them. 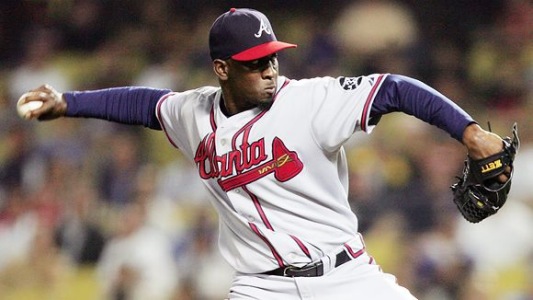 During their organizational meetings, the Yankees will likely discuss all free agent pitchers and left fielders. Some will make more sense than others, but the Yanks will discard most of the names as unrealistic for any number of reasons. One name I thought would make the scrap heap is Rafael Soriano. He’s probably the most attractive free agent relief pitcher, and adding him as Mariano Rivera’s setup man would help the bullpen. There are other factors, however, that make Soriano less attractive to the Yankees.

In the last line of his latest article, George King notes that Soriano’s arm “has seduced some Yankee scouts.” That’s no surprise. He’s a strikeout machine while healthy, gassing hitters with a 93 mph fastball mixed with a slider. At his best, Soriano could close for most MLB teams. And, as Chris at iYankees notes, Soriano is no Kyle Farnsworth. That’s fine, but it doesn’t take into account the other factors that negatively affect Soriano.

Draft pick compensation is one of those issues. As Brian Cashman said on Tuesday, the team doesn’t plan to sign a Type A free agent setup man, because it would cost them their first round pick. For certain players, that pick is just a marginal cost of acquisition. When you want to add CC Sabathia, A.J. Burnett, or Mark Teixeira to your roster, you pay the draft pick tax without question. But when you get to players who will have less of an impact, it becomes more of a consideration.

Working against Soriano is his injury history. He stayed relatively healthy in 2009, missing time with a sore shoulder that didn’t require a DL trip. In 2008, however, he wasn’t so lucky, pitching just 14 innings while dealing with elbow troubles. These aren’t small issues. A hard-throwing reliever with arm problems is not someone to whom you want to commit many years and dollars. When there’s a draft pick tax attached on top of that, it’s a sign to stay clear.

Best case scenario, Soriano would give the Yankees the best setup man-closer combo in the game. But there are many other factors to consider beyond Soriano’s talent. There’s the cost of acquisition, consisting of total salary, luxury tax implications, and draft pick compensation. Is that worth the risk of Soriano missing even more time with arm troubles? I don’t think so. I’d love to see Soriano gassing guys in the eighth, but the cost of acquiring him is just too great.

Apropos of our early discussion on Nick Swisher’s availability comes one of the more tenuous and sketchier bits of Hot Stove reporting we’ll see all year. In what may or may not qualify as something worth publishing on FoxSports.com, Ken Rosenthal tells us that the Yankees’ pitching plans are still unclear. According to Rosenthal, the Yankees have not yet decided if the bullpen or rotation will undergo an off-season boost. Furthermore, the team may or may not be interested in some free agents. First, “one rival executive” says the Yanks are interested in both Rafael Soriano (RHP) and Mike Gonzalez (LHP), but “another source with knowledge of the Yankees’ thinking” believes the team will fill bullpen holes from within. The two strategies are, by the way, not mutually exclusive.

Anyway, the big problem with this type of reporting is that it does not engender trust in any of the people involved. Rosenthal seemingly puts his own theory — that Soriano or Gonzalez or both would do the Yankees some good — into the mouths of two unnamed baseball sources. Since the free agency frenzy does not commence until midnight tonight, nothing has happened, and it’s starting to show.