The Yankees lost their third straight game last night, scoring exactly one run in each loss. They’ve scored more than three runs against a non-Twins team just once in their last nine games and seven times in their last 22 games. Thank goodness Minnesota is coming town for another three games this weekend, eh? Here are some miscellaneous thoughts:

1. I had no problem whatsoever with letting Raul Ibanez walk this past winter because he was mostly terrible before he started hitting those monumentally clutch homers late in last year, but he went into last night’s game hitting .260/.306/.563 (140 wRC+) with 22 (!) homers for the Mariners. The AVG and OBP aren’t anything special, but holy crap could the Yankees use that kind of power bat in their lineup. He can even fake an outfield spot if need be. The so-called Bombers are on pace for 153 homers this season — they had 145 through the same number of games last year — which would be their lowest total in a non-strike season since 1991. Travis Hafner stopped hitting when the calendar flipped to May, making the decision to let Ibanez walk look even more egregious. I was totally cool with it like I said, but this is one I and probably team wishes they could redo.

2. Ty Wigginton is going to be a Yankee, isn’t he? It’s inevitable. The Cardinals cut him loose yesterday, just 87 games into his two-year, $5M contact. That’s what happens when you hit .158/.238/.193 (19 wRC+) in 63 plate appearances with awful defense. Wigginton, a right-handed bat, hit .234/.360/.411 (111 wRC+) against southpaws just last year, which is the kind of performance the Yankees will try to unlock when they inevitably sign him. The freely available Russ Canzler is almost certainly the better part-time first base/third base/left field/DH righty platoon bat at this point, but New York always seems to go for the proven veteran over the inexperienced guy. As soon as Wigginton clears waivers and is available to sign for the pro-rated portion of the league minimum, he’ll be fitted for pinstripes. The Cardinals are extremely well-run team though; if they cut bait, he probably doesn’t have anything left in the tank. 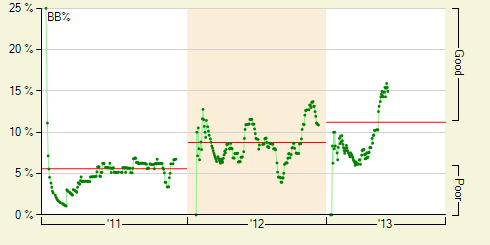 That is Robinson Cano’s walk rate on a day-by-day basis, and it’s going nowhere but up of late. In fact, Cano has drawn eight walks compared to just one strikeout this month. Since June 1st it’s 26 walks and 13 strikeouts (!). There are eight intentional walks mixed in there, but that is to be expected given the state of the offense. Robbie had about a 30-game stretch a few weeks ago where he wasn’t being all that productive, in part because he was chasing stuff out of the zone and not making quality contact. Nowadays he’s willing to take the walk and pass the baton. That maturation as a hitter is great, but at some point someone hitting behind him has to make the other team pay. Lineup protection doesn’t really exist in the sense that putting a good hitter behind Cano will get him better pitchers to hit — no one is going to pitch to him no matter who hits behind him — but it does exist in that someone can make the other team pay for their willingness to pitch around Robbie. The Yankees don’t have that guy right now, not at all.

4. Ivan Nova will make his first start since officially rejoining the rotation tonight — the last two were spot starts, the first due to a rain out and the second because of Hiroki Kuroda’s sore hip — but I wouldn’t be surprised if he was sent back to Triple-A after the game, especially if the Yankees are planning to activate Derek Jeter tomorrow. Based on Joe Girardi’s comments to Brian Heyman prior to yesterday’s game, it sure seems like the Cap’n’s return is imminent as long as the ankle stays in one piece. Since Nova isn’t scheduled to start again before the All-Star break, they could send him down for the minimum ten days without him missing a start. That gives them the roster spot for Jeter and would allow Nova to stay sharp and on schedule with a Triple-A spot start. The Yankees haven’t manipulated their roster around the All-Star break at all in recent years, but this actually seems feasible if Jeter is ready to be activated. No sense in carrying a starter who won’t be available when you can add an extra position player for a few days without throwing the rotation out of whack.

Baseball’s annual Winter Meeting officially kick off today in Nashville, and the next three and a half days will be chock full of rumors, rumblings, trades, free agent signings, and all sorts of neat hot stove stuff. Whether the Yankees get involved and make some moves remains to be seen. They’ve already take care of their major pitching issues by re-signing Hiroki Kuroda, Andy Pettitte, and Mariano Rivera to one-year contracts.

New York’s needs are rather obvious. They need a right fielder to replace Nick Swisher, a catcher to replace the already departed Russell Martin, as well as most of a bench and miscellaneous depth players. We’ll keep trade of any Yankees-related news right here throughout the day with the latest updates up top. Just check the time stamps (all ET).

The trade deadline is 4pm ET today, and the Yankees will definitely be in the market for a fill-in third baseman with Alex Rodriguez on the DL with a broken bone in his hand. Mark Teixeira’s wrist problem could spring them into further action as well, and pitching help — both rotation and bullpen — is always on the agenda. The Bombers are almost certainly done with the outfield market following the Ichiro Suzuki pickup, however. We’re going to keep track of any Yankees-related trade deadline rumors right here throughout the day, so check back often for updates. The latest will be on the bottom. Here are Sunday’s and Monday’s rumors if you missed them…

The trade deadline is 4pm ET tomorrow, and the Yankees will definitely be in the market for a fill-in third baseman with Alex Rodriguez on the DL with a broken bone in his hand. Pitching help — both rotation and bullpen — could also be a target, though they figure to be done looking for outfielders following the Ichiro Suzuki pickup. We’re going to keep track of any Yankees-related trade deadline rumors right here throughout the day, so check back often for updates. The latest will be on the bottom. Here are Sunday’s rumors if you missed them…

Via Jon Heyman, the Yankees have reached out to the Phillies about the availability to Ty Wigginton following Alex Rodriguez’s hand injury. We heard the club would explore the trade market and consider all options when looking for a replacement third baseman on Wednesday morning.

Wigginton, 34, owns an 83 wRC+ this year including a 102 mark against left-handers. He has a rep for being versatile but he’s really just a first baseman who plays a bunch of different positions because he managers keep running him out there. Wigginton has a $4M club option in his contract for next season that will surely be declined by whoever employs him at the end of the season. The Phillies may end up keeping him for the remainder of this year because of Placido Polanco’s nagging back trouble, however.

Via Jon Heyman, Ty Wigginton’s name has popped up in recent talks between the Yankees and Rockies. Earlier today we learned that the two sides have already have multiple discussions about Ubaldo Jimenez. Wigginton’s name gets connected to the Yankees twice a year, every year (trade deadline and offseason), so he’s not some great unknown. He’d be a fine fill-in for Alex Rodriguez, but wouldn’t do much beyond that. Wigginton isn’t cheap ($4M this year, $4M next year, plus an option), certainly not for a bench player. Frankly I don’t see what he offers that Brandon Laird doesn’t, aside from the veteran presents.