Outgoing New York Gov. David Paterson must pay a fine of $62,125 for accepting five complimentary World Series tickets in 2009, the New York State Commission on Public Integrity announced earlier this week. Paterson, the commission found, knew he had violated state law and then refused to admit it under oath. “The moral and ethical tone of any organization is set at the top. Unfortunately the Governor set a totally inappropriate tone by his dishonest and unethical conduct. Such conduct cannot be tolerated by any New York State employee, particularly our Governor,” Michael Cherkasky, chair of the commission, said.

Since the Yankees are an entity that has “myriad and continuing business and financial interests that relate to New York State government,” Paterson would have had to perform a public function at the game to escape ethics scrutiny. He admittedly did not and later tried to both pay for the tickets and claim that he didn’t actually want those tickets. “By his own admission, the Governor did not speak at the opening ceremonies of Game One and was not even recognized by name during the public address announcement recognizing the public officials who were present,” the Commission said in its findings.

Paterson’s lawyers of course refuted the claim, but it’s unclear if the governor will try to fight the charges. “The commission has wildly misrepresented the facts, exceeded its legal authority and generally confirmed what has long been obvious: that these proceedings were always about a political witch hunt and never about the truth,” lawyer Ted Wells said in statement. Based on the evidence compiled by the commission, it’s going to be an uphill battle for the beleaguered state pol, and Paterson may still be facing a state probe over perjury concerns. 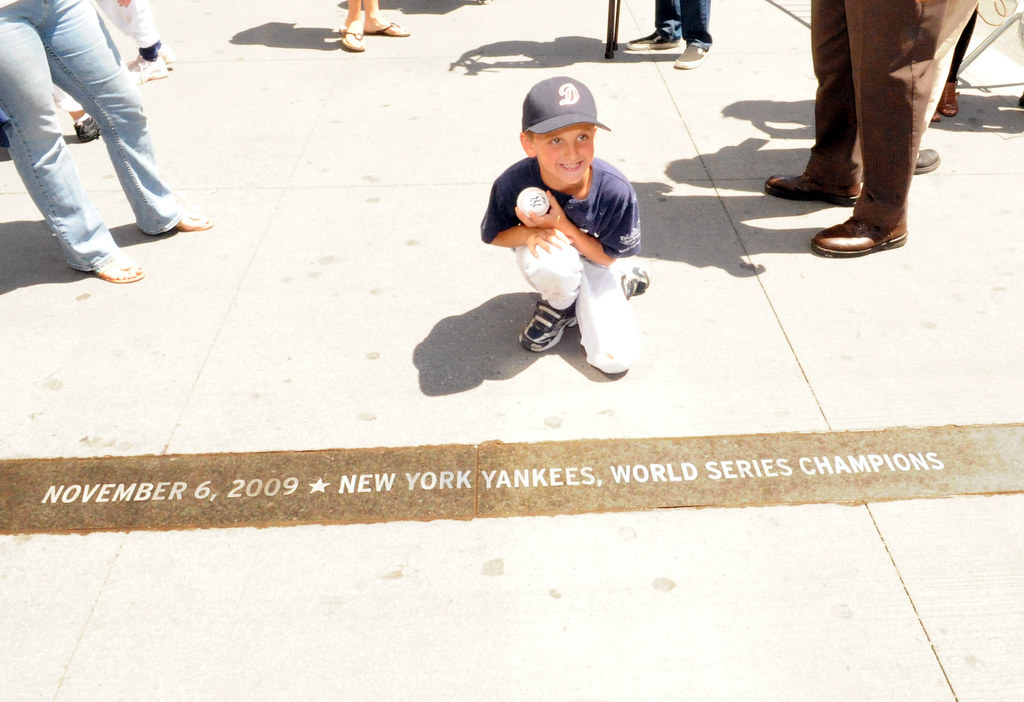 With the World Series runner-up Philadelphia Phillies in town, New York City chose a good day to remind us of the Yankees’ 2009 World Series championship. This morning at the northern end of the Canyon of Heroes, Yanks’ skipper Joe Girardi along with Downtown Alliance officials and the Downtown Little League Yankees unveiled a new marker to mark the November 6, 2009 ticker tape parade.

“Last year was an incredible year for our team and I’m proud to be here today to commemorate our 2009 World Series championship,” Girardi said. “There are almost no words to describe the energy and excitement that was in the air on that special day we all shared last November up the Canyon of Heroes. We are so grateful that each and every member of our team was able to share that feeling with our fans and the great people of the City of New York.”

Whenever I’m walking through Lower Manhattan, I always find the granite markers a unique part of the stroll. They start near the Battery with one dated October 28, 1886 that commemorates the Statue of Liberty, and the Yanks’ new one is nearing City Hall Park. With the team’s late 1990s success, five of the last eight markers now celebrate the Bombers.

For more photos from the event, check out the Downtown Alliance’s flickr photoset. The photo above shows a happy Little Leaguer posing in front of the newest granite stripe and comes to us via the Alliance for Downtown New York.

Back in November, I reported on the Yanks’ record-setting playoff shares. After winning the World Series, the team doled out full playoff shares of $365,052.73, topping the 2006 Cardinals’ record of $362,000. Today, we learn that the record will not stand. Darren Rovell reports that the 46 members of the organization who received full shares will have to give up $10,000 each because two trainers and one player were not allocated the proper amount. Interestingly, Rovell adds that each player nets approximately 50 percent of the total share after taxes.

For your Saturday morning reading pleasures: The Yankees go to China. Late last month, as part of baseball’s effort to penetrate the Chinese market and the Yanks’ effort to spread their franchise globally, team officials headed across the Pacific for a trip to the Far East, and Xiyun Yang of The Times’ China bureau tagged along for some of the trip. Her article is an interesting one because it captures China’s approach toward sports in a rather intriguing light. Despite the billions of people who live in China, only four million play the game there, and to most, it remains a mystery.

Still, Randy Levin and Brian Cashman dragged the World Series trophy with them to drum up interest in the sport and for good reason. As Yang notes, baseball is looking for its Yao Ming, its big Chinese superstar who will open up a very large and lucrative market. The team that finds this player will stand to benefit for years. Most of the youngsters Yang talked to seem to be rather mystified by the game, but all it will take is one person to tip the country. If that means a trip to a nation more focused on Ping Pong, badminton and the NBA than the every move of Johnny Damon, that’s just the price to be.

To end the workday, a lot of small stories with nothing quite worth its own post. We’ll have a site announcement coming up in the Open Thread at 7 p.m. Meanwhile, the news from around baseball:

Despite a nationwide recession, MLB salaries went up again in 2009. Although the 2.4 percent increase was the lowest since 2004, baseball players are still doing quite well for themselves as the average MLB salary is $2.93 million a year. The Yanks were far and away the most generous team as the average Yankee earns $7.66 million a season. This year marked the 11th straight season in which the Yanks led that list. Six of the top eight teams — New York, Boston, St. Louis, the Dodgers, the Angels and the Phillies — made the playoffs with only the Mets and Tigers missing a post in the October dance.

A few months ago, I speculated that the Yankees, if they won the World Series, would earn the highest per-player share in postseason history, and that reality has come to pass. MLB unveiled the Yanks’ World Series shares today, and each person who earns a full share will take home a bonus of $365,052.73. According to the press release, the Yanks have awarded 46 full shares, 12.25 partial shares and 2 cash awards, and for some of those young kids who made the league minimum this year, their salaries just doubled. Postseason shares are awarded from 60 percent of the gate from the first three games of the Division Series and 60 percent of the gate receipts from Games 1-4 of the AL and NLCS and the World Series.

The Yankees aren’t the only players enjoying a rich and lucrative postseason. The Phillies, World Series runners-up, will earn $265,357.50 per full share, and even the chokers get some money. The Red Sox will each earn $28,263.28 for getting swept by Los Angeles. The Angels, in a very classy move, voted to give Nick Adenhart’s family a full playoff share totaling $138,000.

With pitchers and catchers just 79 days away, the Yankees have unveiled their 2010 Spring Training schedule. Pitchers and catchers will report on Feb. 17, and games begin with an afternoon affair against the Pirates on March 3. The Yankees will match up against the Phillies five times during the Grapefruit League and will play all AL East teams except the Red Sox. As a Spring Training finale on April 3, the Big League club will take on a roster of Minor League prospects. If you have a chance to get to some Spring Training games, check out the action. It’s always a lot of fun. Tickets go on sale next month.

For some reason, MLB.com doesn’t yet have the full schedule up on the Yanks’ official site. But Marc Carig has it as his blog. So just head on over for a full list of the games.

TBS fists Chip Caray out of a job

With more than a little glee, Richard Sandomir of The Times reports that TBS and Chip Caray will part ways prior to the 2010 baseball season. Caray came under fire from, well, just about anyone who watched baseball this October for his terrible announcing and play-by-play job. Sandomir highlights a particularly egregious example. While calling what Sandomir termed “an obvious lineout,” Caray announced it as such: “Line drive. Base hit. Caught out there. The runner tags. Throw to the plate. On target. And in time! A double play!” He won’t be missed.

In a piece yesterday, Anthony McCarron noted that the Yanks thought about drafting Matt Holliday in 1998. They opted against making such a move due to Holliday’s football commitment to Oklahoma State. McCarron notes that the Yanks went with Drew Henson, another football/baseball high school star, but the comparison isn’t really apt. Holliday fell to the seventh round due to signability concerns, the Yanks drafted Henson in the third round that year. What the Yanks should not do, however, is rectify a 11-year-old mistake by signing Holliday this winter.

That’s pretty damn cool, is it not?

Here’s your open thread for the night. The awful Knicks and even awfuller Nets are both in action tonight, but I’m not feeling very masochistic tonight, so I’ll pass. Talk about whatever you like, just be nice.

Unfortunately, during the crush of the World Series, I missed this tidbit the first time around, but it’s never too late for some rosy economic news. In the waning days of the World Series, Andrew Leonard at Salon explored the reality that a Yankee World Series win brings with it an average GDP growth of five percent. So not only is our horrible endless nine-year ring drought over, but that the recent economic recession should be over too, right? After all correlation always implies causation no matter how tenuous the connection between the two events may be.