River Ave. Blues » Farnsworth developing not one, but TWO new pitches
Curt Schilling reads our blog
What to do with all these pitchers 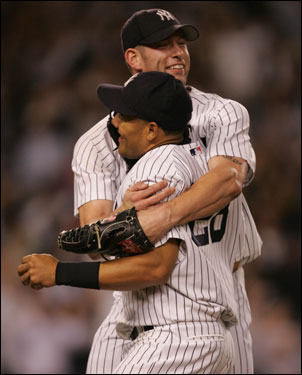 Possibly lost among the “Moose had a good outing” and “Giambi is ready for the season” fodder is an interesting article in the Daily News regarding Kyle Farnsworth’s expanding repertoire.

Farnsworth, one of the Yankees’ setup men, is working on a changeup and a sinker, hoping that pitches in the mid-80s can keep hitters from sitting on his fastball. It’s something that pitching coach Ron Guidry suggested at the end of last season.

I’m a bit puzzled by this. First, how effectively is he going to be able to work in two new pitches? The article mentions that he spent most of the winter resting his troublesome back, so in essence he began developing them this spring. I’m just unsure that a guy entering his 13th year in the league can develop two new and effective pitches in a little over a month.

Second, if he’s adding these two, is he removing the slider? As frustrated as we were last year with his using it in inappropriate situations — not to mention hanging it far too often — does anyone feel better with him using new and untested pitches rather than one he’s used throughout his relief career? I mean, if he can work in a splitter and changeup effectively, then yeah, I can live without the slider. It once again comes back to the skepticism about his ability to throw these pitches.

In theory, I’d love Farnsworth to throw a splitter and a change. With his devastating heat, they seem like the perfect complement pithes. I just wish he’d have come to this realization earlier, when he’d be better able to develop them, rather than rushing in.

My official prediction: he’ll stick with the fastball and slider this season.