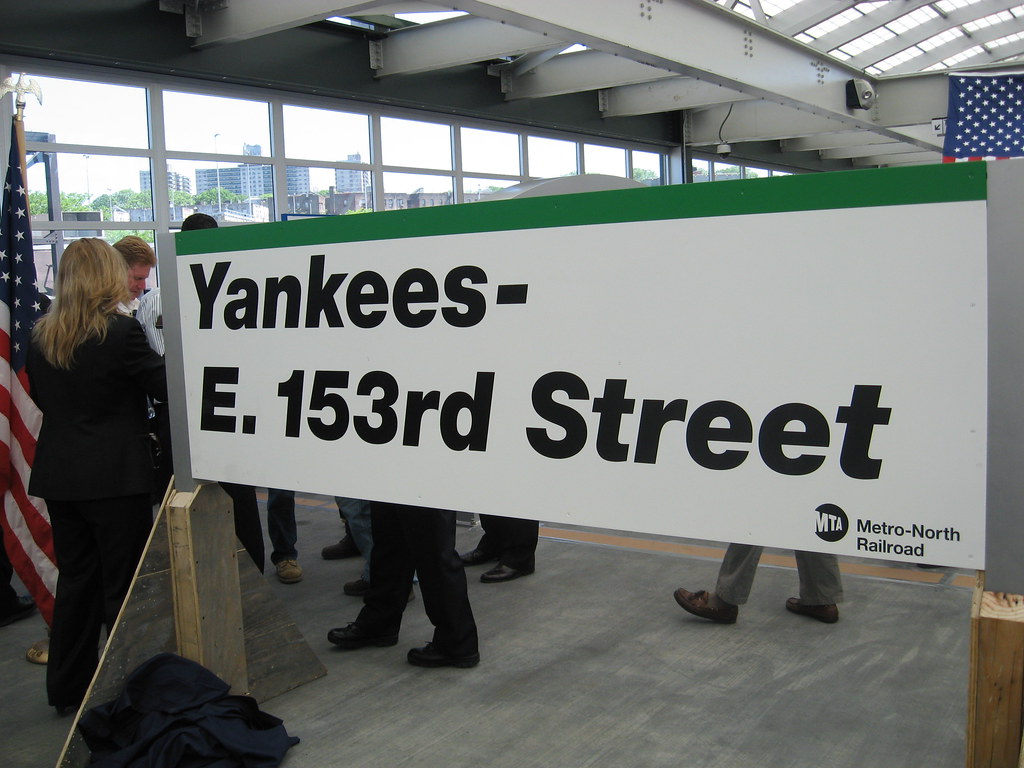 A new Metro-North stop and the Bronx’s first transit addition in decades will open tomorrow morning. (Photo by Benjamin Kabak)

Tomorrow morning shortly before 6 a.m., a Grand Central-bound Metro-North train on the Hudson line will make a stop at Yankees-E. 153rd St. stop. It will be the first train with passengers to stop at this new station, and it will usher in an era of increased transit accessibility for Yankee fans from Westchester and Connecticut.

Yesterday, as part of my other blogging gig, I went up to the new station for its official dedication. Joining me at Grand Central for the ride up north were Jorge Posada, David Cone and Brian Cashman as well as one Michael Bloomberg.

The day was a congratulatory one for the MTA. They opened the new station at Yankee Stadium on time and on budget. It took just 24 months to build and should help reduce traffic volume in and around the South Bronx during Yankee games. “It’s another alternative to taking the subway here,” the Mayor said during the ceremony “And the more alternatives you give, the fewer people will drive.”

Click through, then, for more pictures and information about service to Yankee Stadium along three Metro-North lines. 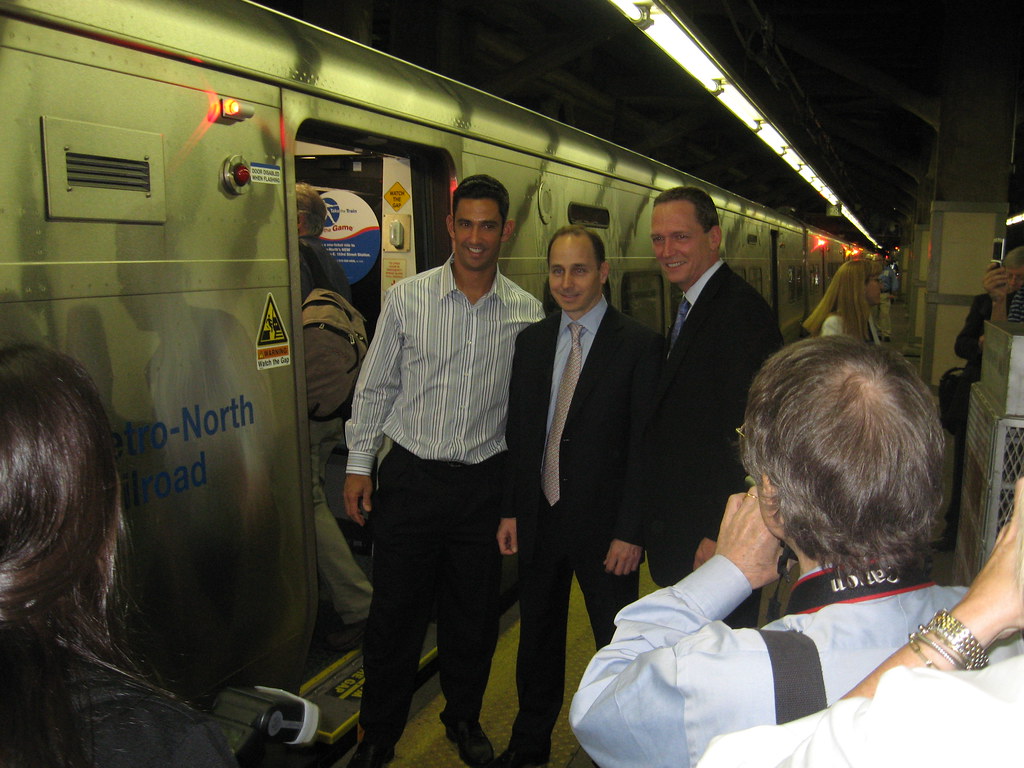 The trip up north started at Grand Central Terminal with a deadhead ride — a passenger-less train — to the new station. The new schedules claim it is a 16-minute ride from Grand Central to the Yankee Stadium stop, and they’re not kidding. It’s a fast, smooth ride with one stop at 125th St., and it’s far more comfortable than the 4 or D trains.

When we arrived at the station, the Yankees just stood there as city and MTA officials took over. The Mayor started off with a joke. While chatting with Brian Cashman in the VIP train car on the way up — I, by the way, was with the press in a different car — he offered to pitch for the Yanks. “I throw righty and not lefty,” he said. “They just don’t need another right-handed pitcher. So I guess I’m out of that job and will keep my old one.” 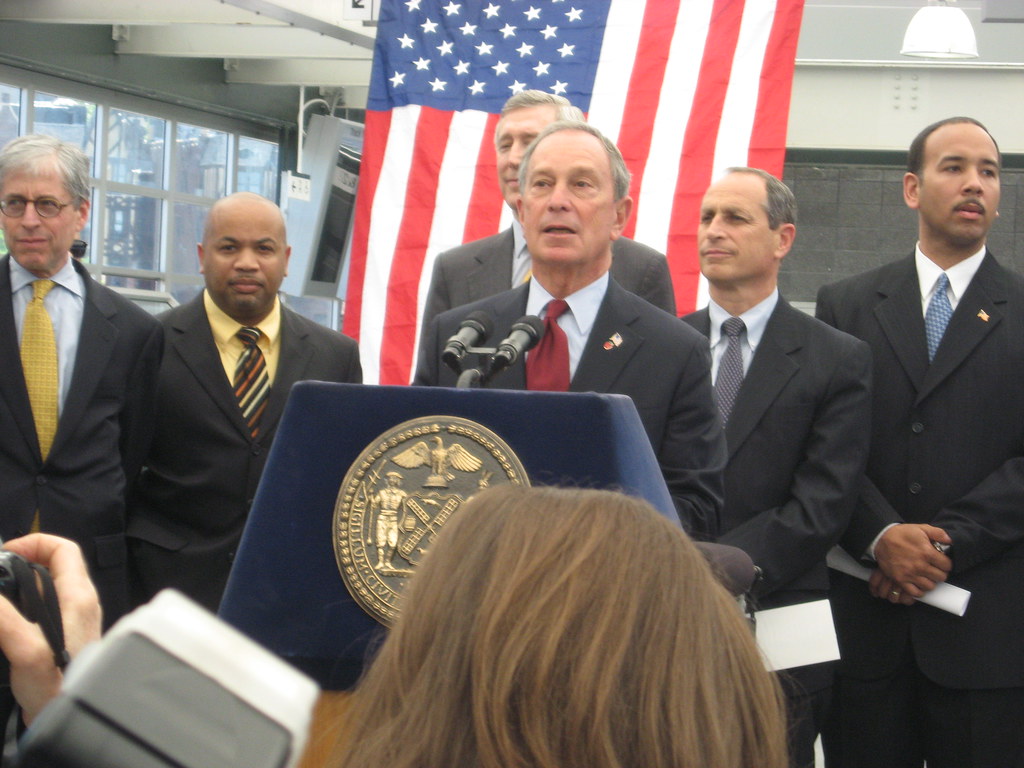 After that, though, it was all business. Bloomberg praised the MTA for realizing the three-decade-old dream of building a station at Yankee Stadium and in the South Bronx. He stressed how the station will improve the quality of life for not just Yankee fans but for residents of the polluted and congested neighborhood. “It’s not just for Yankee Stadium; it’s for the entire South Bronx,” he said while trumpeting his long-term goals of getting cars off the road in New York City. 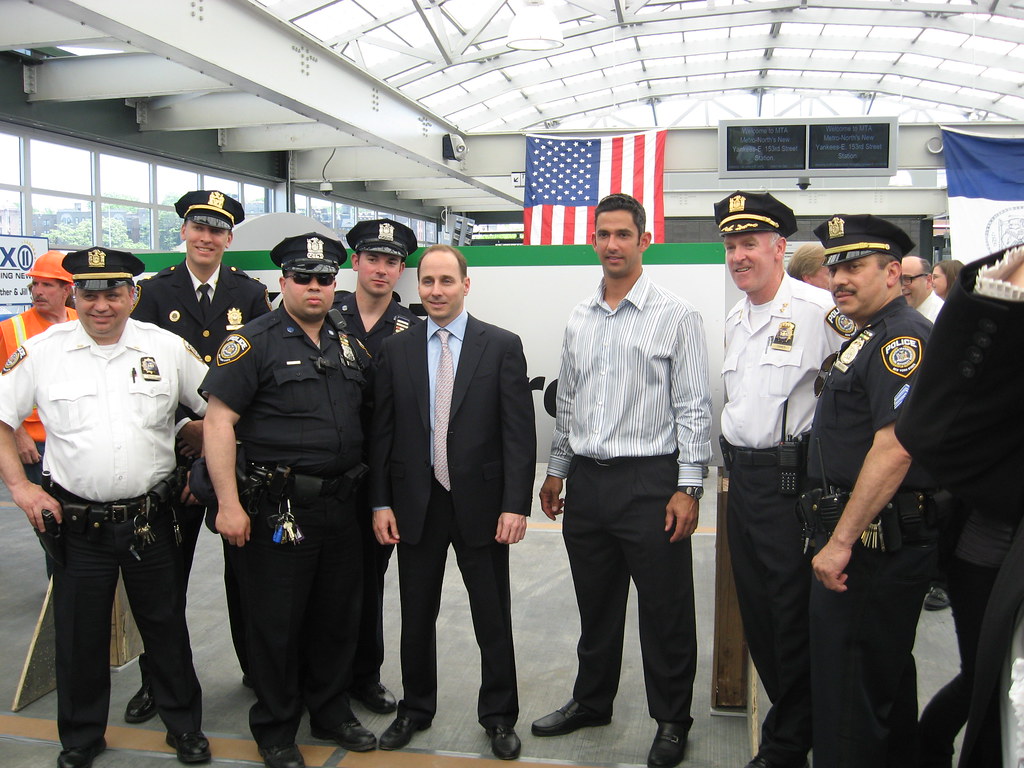 As for the details, the station itself is a 10,000-square-foot, fully ADA-accessible facility. Officials estimated up to 10,000 passengers per day for Yankee games, and if they reach that goal, traffic around the stadium should decrease significantly.

In terms of service, the station will see regular hourly service along the Hudson Line, but service will be increased significantly on game days. Trains from Grand Central will leave every 15-20 minutes, and either three or four additional trains from points north along the Hudson, New Haven and Harlem lines will pass through the station prior to the games. Anyone who lives near a Metro-North line east of the Hudson now has little reason to drive to a game.

The fare scheme is too complicated to explain in detail because it depends upon point of origination. In general, tickets to the station from points north will cost either 75 cents (off-peak) or $1 (peak) more than it does to get to Manhattan. From Grand Central to Yankee Stadium, peak tickets will be $6.50 and off-peak $5 until the fares go up next month. It’s certainly an expensive, if fast and comfortable, alternative to the subway.

Metro-North will also accept the $3.50 City Tickets good for weekend and holiday travel within the New York City limits, and all monthly passes will be honored as well. To beat fare-beaters, customers must have a valid ticket to exit the station before a game and to access the platforms afterward. (For more on the station, check out the MTA’s Take the Train to the Game page.)

In the end, it’s hard not to be excited about this station. It’s a big, modern structure just a five- to eight-minute walk away from the new Yankee Stadium. It should be popular for years to come, and it will open for business on Saturday. So if you’re off to see the Phillies play the Yanks on Saturday afternoon, take the train.