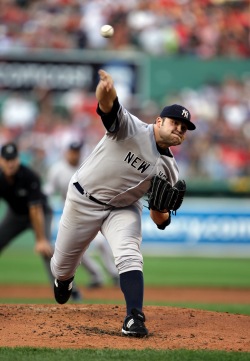 For about eight weeks during the 2008 season, Joba Chamberlain displayed dominance as a starter. After spending the first 60 some-odd innings of his big league career in the bullpen, the Yankees transitioned him to the rotation in June and there seemed to be only a routine drop-off in performance. His fastball still blew away hitters, and his slider still dropped off the table. It appeared the Yankees might see another homegrown star. Unfortunately, after 65.1 innings in the rotation Joba’s shoulder gave a bit, ending his 2008 stint in the rotation. After the season, however, Brian Cashman showed unquestioned faith in his 2006 draft pick, saying that only he and Chien-Ming Wang were guaranteed rotation spots in 2009.

As we remember all too well, Joba’s second season in the rotation didn’t go quite as well as the first. For starters, his fastball lost 2.5 miles per hour, the biggest loss in the majors among pitchers with 50 innings in 2008 and 2009. He seemed tentative on the mound, constantly shaking off Jorge Posada. In many instances he shook his head until Posada signaled for slider, especially in 3-2 counts. But the slider didn’t appear to have the bite we saw over the past two years.

Even still, he managed to pitch decently through July. At that point the Yankees tried two techniques in order to limit Joba’s workload, though neither seemed to take. That might have been a result of the uncertainty he faced, but it also might have been because he’d never pitched so many innings in a regular season. In any case, his performance did decline in the season’s final two months, his ERA inflating by more than a full run over that period. Clearly, something had changed.

Last week we looked at how Phil Hughes changed over the years. Now it’s Joba’s turn. What changes, other than fastball velocity, did he realize in 2009?

As regards his fastball, it appears that velocity is all he lost. In terms of movement he remained the same. In 2008 his fastball broke 4.4 inches towards right-handed batters (compared to a pitch with no spin), compared to 4.2 inches in 2009. His vertical movement was almost exactly the same as well, 10.0 inches in 2008 and 9.9 inches in 2009. He might not have been throwing it as hard, but velocity isn’t everything. His vertical movement remains comfortably above league average, though his horizontal movement remains below.

His bread and butter, the slider, did appear to have changed from 2008 to 2009. It did lose some velocity, about .08 mph, or about one percent. By comparison, his fastball velocity decreased by about three percent. In 2007 and 2008 Joba’s slider seemed to travel about 5/6 of the way to the plate and then drop at the last second. The 2007 PitchFx data is rough, but we can see the effect in 2008. Joba’s slider dropped 0.9 inches, while a league average slider “rose” 2.8 inches. In 2009 his slider had an inch less drop, at 0.1 “rise” compared to a league average of 2.3. So not only did Joba’s vertical movement rise, but the league average dropped.

As we know, pitchers employ different kinds of sliders. While some break primarily on the vertical plane, like Joba’s in 2008, others move side to side. In 2008 Joba didn’t generate much side to side movement, just 0.8 inches against a league average of 2.1 inches. In 2009 it appears Joba changed styles, as his slider broke 2.1 inches horizontally, against a league average of 2.4. The Texas Leaguers Pitch f/x tool says Joba got 18.3 percent swings and misses on his slider in 2009, compared to 26.2 percent as a starter in 2008.

Joba’s other secondary pitch, his curveball, also saw diminished movement in 2009. The horizontal break remained consistent, 4.1 against a league average of 5.1 in 2009 and 4.2 against a 5.3 league average in 2009. In terms of vertical break, however, it wasn’t nearly the same. In 2008, when he started working it into his arsenal as a starter, the pitch dropped 6.7 inches, a full two inches better than the league average.

My question is how to evaluate the pitch’s effectiveness. It’s not necessarily a swing and miss pitch like the slider, so whiff rate isn’t the only factor. In that regard, however, he did a bit better in 2009, inducing a swing and miss 14.9 percent of the time, compared to 5.6 percent as a starter in 08. He didn’t throw it as often for a strike, though, 55.9 percent in 2009 against 58.7 percent in 2008. Hitters swung at it more often in 2009, however, 34.3 percent against 23.8 percent in 2008. Might the greater vertical break in 2008 have fooled more hitters, causing them to look at more strikes?

(I was hoping that Joe Lefkowitz’s Pitch F/x Tool could tell us, but it appears to not be loading 2008 data. Drat.)

When we discuss Joba Chamberlain 2009 season, the topic often centers on his fastball. While his reduced velocity did cause concern, his pitches still broke in a similar manner. What might be more concerning is the change he saw in his secondary pitches. The breaks on his slider and curveball changed in 2009, and as we saw in the case of the slider, it led to fewer swings and misses. It appears Joba has a lot to work on for the 2010 season. Thankfully, he showed up early to get a head start.