Later this afternoon I’ll make the death trip. After the game ends I’ll take my packed bag and head to, gulp, Penn Station, where I’ll grab a train out to Jersey for weekend festivities at various relatives’ houses. It’s the way I spend most Fourth weekends. Horseshoe tournament in South Jersey, poolside BBQ in North Jersey. The only downside is that so many other people are escaping the city that it makes for a madhouse at Penn and Port Authority.

That’s what New Yorkers do, though. On holiday weekends we escape the heated confines of the city and traipse the suburbs for the weekend. Then, of course, we return to the city and thank our lucky stars that we don’t actually live there. Suburbanites should not be offended — it’s just the mentality of living in the city.

While this means a frenzy at the public transit stations, it means fewer people clamoring for Yankees tickets. As you can see in the graphic below, tickets for the game on the Fourth are actually a bit lower than they are for the rest of the season. In Boston, however, it’s a different story. 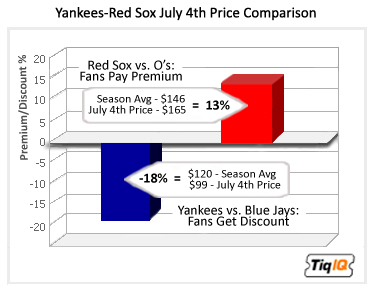 Yes, in Boston the game is the attraction. I guess people don’t flee to other parts of Massachusetts during the weekend. No, they’re demanding Sox tickets even more. I’m sure this has something to do with Fenway being perpetually sold out, but it also probably relates to Bostonians not fleeing the city like New Yorkers.

If you’re looking for tickets for this weekend, make sure to check out RAB Tickets.

Also, we’re running a contest in conjunction with TiqIQ. You’re going to have to get creative to win this one, because it’s a pretty simple question. The more elaborate story, the better chance you’ll have.

Where are you going to watch the game on the Fourth?

Answer in the comments. Most creative/elaborate/hilarious will win a $100 eBay gift certificate.