The first six innings of this one were fairly uneventful. Phil Hughes had a rough second. The Yanks didn’t get a hit until the fifth. Even then, things didn’t get interesting until the seventh, and things heated up for the final three innings. But the Yanks couldn’t capitalize and ended up dropping a tough one 2-1.

Teixeira’s homer, being the lone run, is probably the biggest hit. But, just for fun…

Low-scoring affairs always produce odd results in WPA. For instance, the Red Sox won the game and had a 2-0 lead for most of it. Yet their highest WPA play was Bill Hall’s RBI single, which was only the eighth highest WPA play of the game. Jacoby Ellsbury’s single that moved Hall to third was actually a bit more valuable. The top six WPA plays all came from the Yankees. Go figure.

The biggest swing came in the seventh. Jorge Posada singled to start the inning, bringing Marcus Thames to the plate. He was in the lineup specifically to face the lefty Jon Lester, but list most of the Yankees was 0 for 2 at that point. This time around he got an outside pitch and went with it, driving it over the gap in right-center. The ball hit the top of the wall and bounced upward, leaving us uncertain for a second whether it would bounce over the fence or back into the field of play. It was the latter, which allowed Posada to move to third.

With second and third with none out it looked like the Yanks might finally break through. Things looked even brighter when Austin Kearns took one off the foot and strolled to first. But three strikeouts later, they had nothing going.

Strikeouts get the best of ’em

There were plenty of wasted opportunities late in this game. There was the situation in the seventh, where Lester and Dan Bard struck out three straight Yankees to prevent even a single run from scoring in a bases loaded, none out situation. The first came with Curtis Granderson up. He’d made decent contact off Lester in his first two plate appearances, but this time couldn’t handle him. It was Lester’s last batter and I’m sure he knew it, so perhaps he was giving that little bit extra.

Next up was Derek Jeter, who struck out swinging on a high fastball from Bard. Ditto Swisher. The Yanks had a shot there — in fact, their WPA in the bases loaded, no outs situation was actually above 50 percent despite being behind two runs. But the three strikeouts eliminated the threat, moving the win expectancy down 38.8 percent.

A few other strikeouts hurt in particular. Mark Teixeira’s game-ender, with the tying run on second, was the biggest negative WPA swing of the game, -15.3 percent. The batter before him, Nick Swisher, had the second highest negative swing of the game, -14.5 percent. Curtis Granderson’s ninth-inning strikeout moved the WPA down 9.6 percent. Only Derek Jeter raised it that inning.

I was fuming over Phil Hughes’s first two innings. While he didn’t allow any runs in the first, he didn’t look particularly sharp. That came back to haunt him in the second, when he threw 37 pitches to seven Red Sox. But a lot of that wasn’t his fault. He hadn’t after all, given up many hard-hit balls.

In the first J.D. Drew got a base hit on a grounder. David Ortiz had a well-struck ball, but that was all they’d get in that frame. Then in the second he allowed another single on a grounder, which was followed by another poor throw-down by Jorge Posada on a steal attempt. With Ryan Kalish at third, Bill Hall hit a groundball infield single, plating the first run. Jacoby Ellsbury then hit one just out of Jeter’s reach, and it was a ball that maybe he gets to if he’s not at double play depth. The walk is inexcusable, but then Hughes got another grounder. Cano had to hustle to the hole to get it, and so didn’t get the double play, which resulted in another run. And, of course, Hughes ended the inning with another groundball out.

After that, though, he settled down nicely, throwing 16 pitches in the third before getting the Sox on seven in the fourth. He ended the day with 114 pitches through six, having allowed just one hit after Ellsbury’s single. He struck out just three, but he did get nine ground balls and kept all nine fly balls in the park. Considering the poor luck he had in the second, it’s hard to hold this one against him. 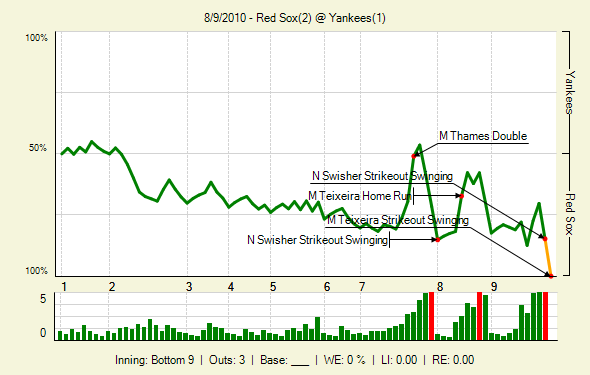 More at FanGraphs. Or you can check out the traditional box.

The Yanks will travel to Texas, sans Mark Teixeira, to face C.J. Wilson and the Rangers. A.J. Burnett will make his delayed start.