River Ave. Blues » Gardy or Grandy in 2011?
A-Rod carries Yankees back into first place
25 things you don't know about baseball 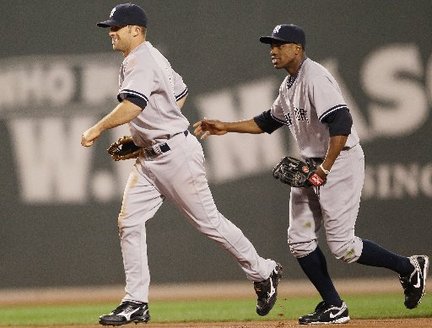 On twitter recently Stephen R. from TYU threw out a question about what you would give up for Colby Rasmus. It wasn’t considering team needs, salary, etc. but he wanted to know how Yankee fans valued their prospects vs. Rasmus. There were interesting responses, and one of the often repeated arguments was that Yankee fans would rather trade Gardner than Granderson. This brings me to my question: Who does more for the Yankees in 2011?

I’ll start by saying I am a big proponent of Granderson. I think going forward for 2011 and 2012 (at least) Granderson will outproduce Gardner. Looking at their 2010 seasons this assertion seems a little off the wall, but I think we have seen the worst of Granderson and the best of Gardner. Granderson has been a valuable player this year, Gardner has played at an All-Star level. I get that. My concern is going forward. Aren’t we seeing the absolute peak of Gardner’s abilities this year?

If the 2010 Granderson is the player he is going forward, he still provides value as an average offensive player with above average defense in CF. Working with Kevin Long has helped Granderson recently, though there is no way we can directly correlate that Long’s help “fixed” Curtis. Whether it was Long’s help or not, Granderson’s bat has picked up in the past month. Long will likely be around next year and Granderson is a willing listener and learner. Either way, Granderson definitely has room for improvement. Will he ever be the beast he was in 2007 and 2008? Probably not, though at just 30 years old on Opening Day 2011, he’s still in his expected prime and is definitely capable on improving his 2010 season. Granderson’s 2010 BABIP is .283 vs. a career BABIP of .316. I can’t ignore that his 2009 BABIP was .275 so I don’t want to say he has been unlucky for two straight years, but his batted ball data hasn’t seen any major shift in 2009-2010 from the rest of his career. His career LD% is 20.7 which he is matching this year and was at 21.2% in 2009. With his speed and line drive rate, I have to think his BABIP is due for a rise next year. Even if it doesn’t, he’s still valuable.

If the 2010 Gardner is the player he is going forward, he provides a ton of value. I’m just not convinced Brett will keep this up going forward, this is likely his peak. What can he realistically do better than he is doing this year? He’s not going to hit for power. I doubt he’ll become a .420 OBP guy. Are more of his balls in play likely to fall in for hits? Doubtful. His defense is great and isn’t something that he’ll necessarily improve going forward. Gardner to me is the epitome of a sell high piece right now. We don’t know that Gardner can repeat this next year. If he does, that’s great. If he doesn’t, then you’ve just lost a very valuable trade chip and might have a 4th OF on your hands. Noted Yankee hater* Keith Law is still not sold on Gardner. He doesn’t believe Gardner’s skill set will allow him to continue producing at this level. Whether it turns out to be true or not, that’s a fair assessment. I don’t advocate trading Gardner for a middle reliever, but if there are teams out there that are sold on Gardner’s 2010 as his true level, you have to investigate. Considering the financial cost, I believe Gardner, at least to some teams, would be more valuable on the trade market than Granderson anyway.

In 2011 Gardner could certainly be a more valuable player than Granderson, but Granderson is far more of a sure thing. Granderson’s potential peak is higher, but more importantly Gardner’s potential floor is lower.  Maybe the Yankees are 100% sold on Gardner and like his cheap production, but if these guys come up in trade talks during the offseason, I’d much rather Gardner be the one packing his bags.