As far as home runs go, the 2018 Yankees lived up to the hype. The set a new Major League record with 267 homers, and they did that despite Aaron Judge missing close to the two months, Giancarlo Stanton not having a typical Giancarlo Stanton year, and Gary Sanchez being either hurt or ineffective all year. This club would’ve shattered the previous homer record (264 by the 1997 Mariners) with everyone at full strength.

Blame the short porch. The Yankees certainly hit some long home runs this season, as we’ll see in the bit, but they also hit a ton of short porch Yankee Stadium cheapies, which drag down their average home run distance. I will happily continue to trade average home run distance rank for actual runs on the board in games. The Yankees really know how to use their home ballpark.

Anyway, dingers rule, and as a fan of dingers I’ve been putting these “five longest homers of the season” posts together since 2010. Last year’s post was an all-timer. Only one of the 35 home runs covered in the 2010-16 posts would’ve appeared in the 2017 post. This year isn’t quiet as majestic, but it’s still pretty fun. Let’s dive into the Yankees’ five longest home runs of 2018.

On Opening Day, Stanton clobbered two impressive home runs in the Game One win over the Blue Jays. Five days later he heard boos at Yankee Stadium after going 0-for-5 with five strikeouts. Fans, eh? The next day, in the team’s sixth game of the year, Stanton hit the team’s fifth longest home run of the season to silence the boos.

The first at-bat homer against likely AL Cy Young award winner Blake Snell was Stanton’s first homer at Yankee Stadium as a Yankee. (He hit one in the Bronx as a Marlin.) Also, that was the only game all year in which Judge, Sanchez, and Stanton all hit home runs. Happened once all year. Distance: 458 feet.

Sanchez woke up on the morning of September 10th with a hideous .181/.279/.400 (84 wRC+) batting line in 308 plate appearances around two stints on the disabled list. He’d gone 3-for-25 (.120) with one home run in his first seven games back from his second groin injury, and while it’s somewhat understandable after the long layoff, it made it no less frustrating to watch.

Later that night Gary had what we all hoped would prove to be a big breakout game (it wasn’t) against the Twins. Sanchez had a homer, a single, and a double in the span of three at-bats from the sixth through eighth innings. Kyle Gibson served up the home run that broke the scoreless tie.

That is one of those home runs that leaves you shaking your head in disbelief. How could anyone hit that pitch in that location … 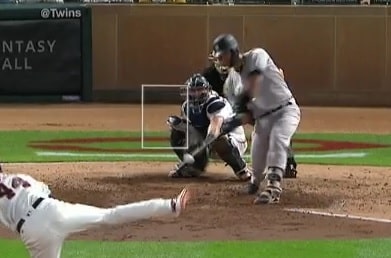 … that far out of the ballpark? That’s a 95 mph two-seamer diving down and in, and out of the zone. Sanchez was still able to get good wood on it and park it in the third deck at Target Field. Pretty wild. Distance: 460 feet.

Poor Josh Tomlin. That dude allowed 25 home runs in 70.1 innings this season. That works out to a 3.2 HR/9. More than one every three innings. Here are the fewest innings among pitchers with 25+ home runs allowed in baseball history:

Two Orioles in the top five seems about right. Sanchez took Tomlin deep on May 4th for the 13th of those 25 home runs. It was the third home run Tomlin allowed in that game. Gleyber Torres and Judge took him deep earlier in the game, though neither hit the ball as far as Sanchez, who hammered a no-doubter to left.

Another pitch out of the zone. The Gibson home run came on a pitch below the zone and the Tomlin homer came on a pitch above the zone. Oddly enough, those are two of only three (maaaybe four) home runs Sanchez hit on pitches outside the strike zone this year. (The third is the walk-off homer against the Twins.) Distance: 461 feet.

Judge dominated this list last year. He hit five the team’s sixth longest home runs last season. This year, he hit only one of the five longest. Blame the wrist injury, which not only took away seven weeks of playing time, but also sapped his power a bit for the first few games following his return.

Long before the wrist injury Judge clocked his longest home run of the season and the Yankees’ second longest home run of the season. It came on May 23rd in Texas and this is the inevitable home run I couldn’t remember. Usually as I compile these posts, I see the distance and the hitter and the pitcher, and it’ll jog the memory of the homer. This one drew a blank. There’s always one each year. The video:

Ah yes, that’s the good stuff. That’s the classic “oh yeah, I got all of that one” Aaron Judge swing followed by quick step out of the box and a jog around the bases. That was the sixth homer as part of an eleven-homers-in-29-games tear for Judge that spanned May 4th to June 9th. Distance: 471 feet.

In Game Two of the ALCS, with the Yankees holding a far too narrow 3-1 lead, Sanchez unloaded on a mistake fastball from Eduardo Rodriguez for a sorely needed three-run insurance homer. Look at this blast. Just look at it:

It’s hard to tell from the video but I’m pretty sure the ball cleared the big Fanatics sign and sailed out of Fenway Park entirely. Either way, Sanchez hit that ball out to the deepest part of the park and over the highest wall in baseball, and it was an absolute no-doubter. Second homer of the game for Gary too. Without them, the Yankees probably get swept in the ALDS. Distance: 480 feet.

Austin Romine? Austin Romine. We only have four seasons worth of data, but that is not Romine’s longest home run of the Statcast era. He blasted a 442-foot dinger back in 2016 (video). Huh. Well, anyway, the homers by guys other than Judge, Sanchez, and Stanton aren’t quite as impressive, but that’s okay. They all count the same. Long home runs sure are fun though, aren’t they?

Hot Stove Rumors & News: Harper, Machado, Free Agents
A Half-Season of Greatness and a Half-Season of Knee Trouble for the Closer [2018 Season Review]