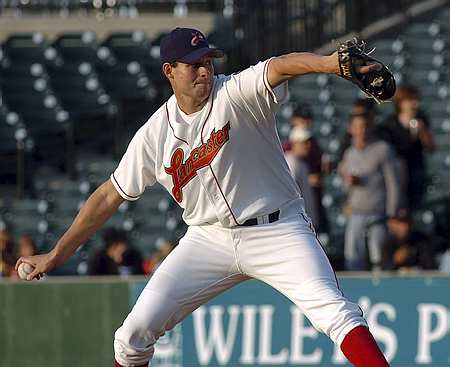 Background
Patterson was born in Pittsburgh and raised a few miles away in the Steel City suburb of Oakdale. He attended West Allegheny High School and still holds the school’s single season strikeout record. He then headed to Allegheny College halfway between Pittsburgh and Cleveland, a school that has produced a handful of big leaguers (Pirates’ reliever Josh Sharpless is the most notable alumnus, I guess) and the insufferable Trent Reznor. He transferred to West Virginia State University after two years at Allegheny, and was outstanding in his two years with the Yellow Jackets. Patterson was named First Team All-Region and Conference Pitcher of the Year as a senior, and helped the team to the Conference Championship and the #1 seed in the NCAA Division II postseason tournament. Despite his exploits, Patterson went undrafted in 2002 and headed to the Independent leagues.

Pro Career
Patterson caught on with Gateway of the Frontier League and spent the next two-and-a-half years at the front of the Grizzlies’ rotation (the team is stationed outside of St. Louis). He led the Grizzlies to the 2003 Frontier League Championship in only it’s third year of existence, and went a combined 21-7, 3.58 ERA, 1.15 WHIP in 53 games with the squad. He was non-roster invitee to Mariners’ camp in 2004, but didn’t make the team and ended up back at Gateway.

The Atlantic League is by far the most prestigious and competitive Indy league around, and it proved to be a tough challenge for Patterson. He went 4-2, 4.68 ERA, 1.43 WHIP in 28 games (9 starts) with the Barnstormers in 2005, and was traded (along with career Indy baller Joe Dooley) back to Gateway in July for future considerations. The return to Gateway was a blessing for Patterson, who served as the Grizzlies’ closer the rest of the season and went 27.1 IP, 21 H, 5 ER, 8 BB, 41 K with 9 saves.

Patterson returned to Lancaster in 2006 and remained in the closer’s role, going 23 IP, 12 H, 2 ER, 5 BB, 31 K with 14 saves on the year. The Yankees purchased his contract from the Barnstormers on June 16, 2006 and assigned him to Double-A Trenton. Patterson continued working out of the bullpen, and had a fantastic pro debut, going 38.2 IP, 26 H, 10 ER, 8 BB, 44 K the rest of the season. He had gotten a second chance with a MLB organization and made the most of it.

The Yanks returned Patterson to Trenton in 2007, and he had a breakout year that put him on the prospect map. He threw 74.1 innings, giving up only 45 hits and 15 walks against 91 K on the year. He was bumped up to Triple-A Scranton late in the season as a reward, and tossed three perfect innings in his only outing with Scranton. The Yanks wanted Patterson to build off his success, so they shipped him to the Venezuela Winter League where he continued to do more of the same: 23.1 IP, 19 H, 5 R, 4 ER, 3 BB, 20 K. His season ended in late December when he went home to finally get some rest.

Patterson’s contract expired after the season (he originally signed a two year deal with Lancaster in 2005), but he was comfortable with the Yanks and agreed to a one year Major League deal to return to the club in late November. He was added to the 40-man roster, and became the first Gateway Grizzly and Lancaster Barnstormer alumni added to a ML 40-man in either franchises’ history. As a professional baseball player, Patterson’s career line is 565 IP, 488 H, 189 ER, 127 BB, 581 K. As a reliever that line improves to 189.2 IP, 124 H, 40 BB, 228 K.

Strengths
Patterson is a giant on the mound, standing 6′-7″, 230 lbs. His fastball velocity is just average, sitting at 89-91 even out of the ‘pen, but it plays up because he throws on an extreme downhill plane and has excellent command of the pitch, hence the low walk totals. Patterson’s best secondary pitch is a big ol’ loopy curveball, a slow bender that is most effective when he uses it as a change of pace pitch. He’s worked with organization pitching guru Nardi Contreras on adding a slider, but that experiment failed and he’s now trying to learn a splitter. He has a deceptive, right over-the-top pitching motion – here’s the best clip of it I can find.

Patterson has certainly found his niche in the bullpen; he gives up about 2 fewer hits per 9 IP and strikes out about 4 more batters per 9 IP working in relief. He’s also said that he enjoys the role more and it helps him stay fresh over the course of the season. He’s been playing baseball professionally for six years now, so he’s got experience in all sorts of roles on all sorts of teams. He’s also supremely durable, and has never missed time with injury.

Patterson had a weird little ritual in college and Indy ball where he did a bunch of push-ups prior to warming up because he said it makes him feel stronger on the mound. I haven’t been able to find anything to confirm that he still does this, but if nothing else it gives him a mental edge. Oh, and Patterson also gets ginormous brownie points for having his own site, complete with a bad-ass little intro.

Weaknesses
At 28 years old, Patterson is no spring chicken. He’s basically in his prime right now and has zero physical projection left. He’ll occasionally leave pitches up and over the plate (it’s hard to hit the bottom of the zone as a 6′-7″ pitcher coming over the top on a 15″ mound) and can be prone to the long ball (about one homer given up every 10 innings, although his HR rate has dropped big time since moving to the ‘pen). His GB/FB ratios are consistently well-under 1.00. Patterson’s delivery is very reminiscent of Brad Penny’s with a violent head jerk and a pretty big recoil. That’s typically a recipe for shoulder trouble.

2008 Outlook
Now that he’s on the 40-man, Patterson is closer to the bigs than he’s ever been. The Yanks will give him a real long look in Spring Training, and a big league bullpen spot is basically his to lose. If he doesn’t break camp with the Yanks, he’ll head to Triple-A Scranton and be among the first called up when the inevitable injury/suckiness strikes.

My Take
It’s hard not to root for a guy like Patterson – the ultimate underdog, a guy who’s had to earn everything he’s accomplished in baseball. Patterson is yet another example of the Yanks ability to mine the Indy leagues for talent, and it’ll be quite a sight if he and fellow former Indy baller Edwar Ramirez are ever warming up in the bullpen side-by-side for the $200M Yankees. Patterson is what he is, but what he is is pretty darn good. At worse he should be an effective middle man right away for the Yanks, but his pitching package and mentality could have him setting up games in the future. Scott Patterson is a great baseball story, and I don’t think I’m alone when I say I’m pulling for him to do well.

The news gets worse for Jim Leyritz
Selig extended through 2012