Phil Hughes made his first start in nearly three months last night, dancing around danger for five innings and allowing just two first inning runs. He gave up six hits (all singles), two walks, and two hit batters, throwing 87 pitches and getting just two swings and misses.  “People are going to say it’s a good outing, but we know that he can be better,” said Joe Girardi afterwards. “We know that he can be downhill more …  I talked about with the extra days off and the first outing, my concern was that he would be up a little bit. That’s what we saw.” And up he was… 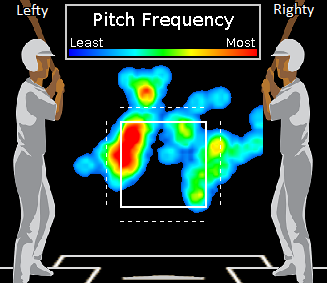 That heat map comes courtesy of David Golebiewski at Baseball Analytics and shows the location of Hughes’ fastballs last night. Everything is up in the zone, and a fair amount of it is towards the middle of the plate. There’s nothing wrong with pitching up in the zone if you have enough fastball to get away with it, but right now Hughes doesn’t. He sat mostly 91-92 mph last night with a few 93’s mixed in, up from earlier in the year but still down from last season, when he’d routinely flirt with 94-95.

Hughes is a big dude, listed at 6-foot-5 and 240 lbs. on the official site, but he’s so not outrageously tall that driving the ball down into the bottom third of the zone should be that difficult. He’s a fly ball pitcher (just 35.2% grounders for his career) because he’s up in the zone so, and that’s why he had so much trouble with homers in the second half last season. It sounds easy, but it only is in theory: Hughes has to pitch down in the zone given his present stuff. Pitching upstairs consistently just won’t work like it did in the first half of last year.

Of course, one start doesn’t tell us much. Perhaps he was just amped up and overthrowing, leading to pitches up in the zone. Did Phil look better than he did in April? Obviously yes, it would have been tough to look any worse. But he still had the same problem with putting guys away, so instead of trying to strike everyone out, it might be time to switch to (ugh) pitch-to-contact mode, even if it’s just temporary. Getting the ball down in the zone will help that, and maybe dabbling a two-seam grip would be worth a try as well.