River Ave. Blues » Season Over: Yanks go out with a whimper in 3-0 wildcard game loss to Astros
2015 AL Wildcard Game Thread: Astros at Yankees
Thoughts following the Wildcard Game loss to the Astros

In the end, the team-wide offensive inconsistency was too much to overcome. The limp to the finish line carried over into the postseason and the Yankees were knocked out by the Astros in the AL wildcard game Tuesday night. The final score was 3-0. The season is officially over. Everything sucks.

Runs? They Didn’t Even Get To Third Base
Offense has been hard to come by of late — the Yankees scored 44 runs in their final 14 regular season games, or 3.14 per game — and the struggles didn’t go away in October. Dallas Keuchel certainly didn’t help matters. The Yankees mustered only three hits on the night, all singles, and they drew two walks. They didn’t even have a runner reach third base. The offense was totally overmatched. This game was not nearly as competitive as the score may indicate.

The hits: Greg Bird with two outs in the second, Didi Gregorius leading off the sixth, and Carlos Beltran with two outs in the sixth. Chris Young drew a one-out walk in the first and Chase Headley drew a one-out walk in the seventh. That’s all. That’s all the base-runners. The sixth inning was the only time they had two runners on base at the same time. So they had the tying run on base! That’s good! And Alex Rodriguez was up! That’s also good! So was Keuchel’s climbing pitch count!

That sixth inning rally, which really wasn’t much of a rally, was by far the Yankees best chance to get back into the game. Keuchel was tiring — manager A.J. Hinch went out to talk to him before the A-Rod at-bat to see how he was doing, in fact — and, at the very least, the Yankees had a chance to get on the board. Instead, Alex missed a cookie of a cutter … 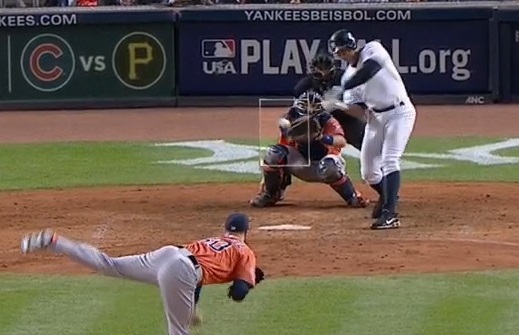 … and flew out to center field to end the inning. That’s it right there. That’s the pitch that could have turned the entire game around. Instead, Alex flew out, and the Yankees had just one base-runner the rest of the game. That was Headley’s walk. The final eight batters they sent to the plate made outs and only one of those guys hit the ball out of the infield.

Give Keuchel credit, he pitched a helluva game on short rest, but the we’ve seen games like this too many times the last few weeks. Maybe not this bad — I mean, three singles and two walks? yeesh — but bad. The offense really sputtered down the stretch. Bird and Beltran were the team’s only reliable hitters over the last few weeks and that’s simply not enough. It was a team-wide disappearing act. From watching Tuesday, you would have never guessed this team scored the second most runs in baseball in 2015.

Obligatory Home Runs
Two runs in five innings is not a bad start by any means, but Masahiro Tanaka wasn’t great in the wildcard game when the Yankees needed him to be. The first inning was incredible. Yankee Stadium was electric — I haven’t heard it that loud since the 2009 postseason — and Tanaka struck out the first two batters before getting a fly out to end the inning. It was amazing. What a fun inning.

Then Colby Rasmus ruined the fun with a first pitch home run leading off the second inning to give the Astros a 1-0 lead. Yuck. Houston actually loaded the bases that inning and could have really blown things open, but Tanaka was able to escape with just the one run allowed. Carlos Gomez hit Tanaka’s first pitch of the fourth inning out of the park for a solo homer to make it 2-0. Tanaka’s homer problem continued to be, well, a problem.

All told, Tanaka allowed just those two runs on four hits and three walks in five innings. He struck out three and got a healthy 13 swings and misses out of 83 total pitches (15.7%). This was a grind though. Tanaka had to battle in every inning but the first. He wasn’t great but he wasn’t terrible either. All things considered, I think I would have taken two runs in five innings from Tanaka coming into the game, especially with the bullpen ready to go.

The Bullpen
As planned, Joe Girardi went to his big three relievers. Justin Wilson walked a batter but got a double play and four outs total. Dellin Betances was summoned in the seventh and he allowed an insurance run on a walk, a stolen base, and a single. The walk wasn’t surprising at this point. Dellin’s had control problems for weeks now.

The steal shouldn’t be surprising either — Betances allowed 17 steals in 21 attempts this year. He is very slow to the plate and usually it doesn’t matter because he’s so good at preventing base-runners. The Astros were very aware of his problem holding runners though, so pinch-runner Jonathan Villar stole second and scored on Jose Altuve’s single. Look at this pitch Altuve hit: 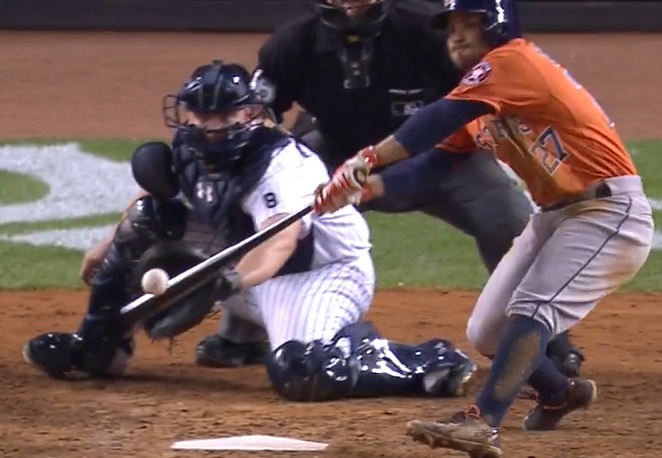 Baseball can be so stupid sometimes. Betances and Andrew Miller eventually got the final six outs of the game without incident. The plan was Tanaka to Wilson to Betances to Miller, and that’s exactly what happened. Too bad the offense didn’t hold up its end of the bargain.

Leftovers
I’m not sure what’s left to add here. Both Gregorius and Headley had a great game in the field — Headley made an excellent barehand play for the final out of that messy second inning — and Brett Gardner also made a great play running down an Evan Gattis line drive into the right-center field gap in the second. The defense finally showed up!

Gardner and Ellsbury were booed tremendously after making outs in the eighth inning. I hope they were just booing the team’s general lethargy rather than Gardner individually. I know he had a brutal second half, but he was pretty awesome overall this year. Ellsbury? Let’s just say I have no trouble booing guys with Red Sox ties.

And finally, the final out of the season was a soft McCann ground ball to shortstop. I was hoping he’d pop-up one last time. Alas.

Box Score & WPA Graph
Here’s the box score and video highlights. I might as well link you to the season standings, Bullpen Workload page, and Announcer Standings page one last time. Here’s the loss probability graph:

Up Next
Up Next? Up next is the offseason. The next time we see the Yankees will be roughly four months from now in Tampa, when they report to Spring Training. Every offseason is busy and exciting and this one will be no different. Thanks for reading this season. The ending sucked but it was still a fun year.