What an annoying end to the six-game West Coast portion of the nine-game road trip. The Yankees wasted a whole bunch of scoring opportunities Sunday afternoon and were unable to complete the sweep in Seattle. The Mariners won the series finale 3-2. The Yankees are three games up on the Athletics in the loss column for the top wildcard spot, but, because they hold the homefield advantage tiebreaker, it is effectively a four-game lead with 19 games to play.

Sabathia Settles Down
Not a good start to the game for CC Sabathia. After two quick outs in the first inning, the Mariners strung together four straight two-out singles to score two runs. It would’ve been five straight singles had Adeiny Hechavarria not made a nice leaping catch to rob Jean Segura of a line drive base hit. That was the second out of the inning, then the four straight hits followed to give the Mariners a 2-1 lead.

The Mariners opened the second inning with a single and a walk, giving them six baserunners in the span of seven batters. Add in Hechavarria’s leaping catch and it was five hits, one walk, and one line drive out in the span of eight batters. Not good! Sabathia escaped that second inning with a fielder’s choice and a ground ball double play. Following that second inning walk, he retired eleven of the final 13 batters he faced. The two baserunners were an infield single and a single against the shift.

Sabathia’s final line after Chad Green stranded the inherited runner in the sixth: 5 IP, 7 H, 2 R, 2 ER, 1 BB, 4 K on 84 pitches. The Mariners had eight right-handed hitters in the starting lineup and Sabathia had a tough time getting his cutter in on their hands early in the game, hence all those baserunners in the first and second innings. Here are his first and second inning cutter locations: 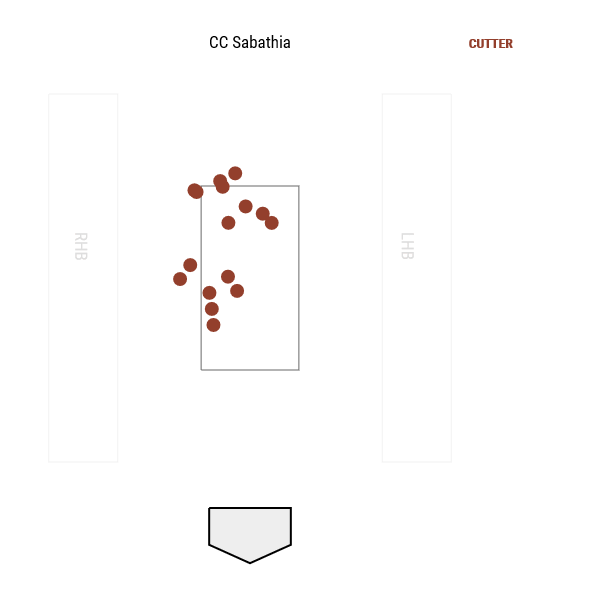 A few too many cutters out over the plate rather than inside, and the Mariners made Sabathia pay. Things seemed to click in the third inning and he was able to settle down after that. Four straight two-out singles in the first inning was pretty, pretty annoying. At least Sabathia was able to right the ship and keep the Mariners off the board the rest of the way. It is September 9th and the big man has a 3.54 ERA (4.04 FIP) in 139.2 innings. Pretty rad.

A Wasted Rally To Tie The Game
The Yankees struck quickly with back-to-back doubles for a 1-0 first inning lead. It was more like a dropped fly ball and a double though. Giancarlo Stanton lifted a routine fly ball to left, Segura and Cameron Maybin miscommunicated, and the ball fell in. Miguel Andujar then drove a ball into the left field corner for a legitimate double. I love love love scoring in the first inning on the road, especially when it’s made possible by the other team’s screw up.

The Mariners took a 2-1 lead in the bottom of the first, and, for the second time on the road trip, the Yankees loaded the bases with no outs and managed only one run on a bases loaded walk. They did it Tuesday against Jeurys Familia and the Athletics. They did it again in the fourth inning Sunday. Neil Walker, Gleyber Torres, and Luke Voit loaded the bases with three singles. Walker battled Erasmo Ramirez for nine pitches before dunking a leadoff single to center.

Things went downhill after that. Hechavarria swung at three pitches out of the zone to strike out for the first out. A completely non-competitive at-bat. That would’ve been a good time to break out a pinch-hitter now that rosters are expanded. If Didi Gregorius wasn’t available because he’s being eased back into things so soon after returning from the disabled list, fine. Aaron Hicks and Greg Bird were still on the bench though, and Ronald Torreyes and Tyler Wade were available to play the middle infield. Blah.

After Hechavarria’s strikeout, Brett Gardner popped up in foul territory along the third base side for the second out. First pitch of the at-bat too. Kris Negron made a real nice running over-the-shoulder catch. From three straight singles to two quick outs. The rally was on life support. Fortunately the very good and very disciplined Andrew McCutchen came through with the bases loaded walk to tie the game 2-2. What a relief. Here is the at-bat:

Going into the game McCutchen had the third lowest chase rate among the 150 batters with enough plate appearances to qualify for the batting title. Joey Votto (15.6%), Alex Bregman (17.1%), Andrew McCutchen (18.0%). That’s the top three. (Hicks is fourth at 19.0%). McCutchen took a borderline 2-2 pitch at the knees to work the count full before laying off the 3-2 slider out of the zone. Great at-bat.

Score Without A Hit
What an annoying rally to lose the game. The Mariners scored the go-ahead run in the eighth inning without a base hit and without hitting the ball out of the infield. Dellin Betances, in to face the top of the order in a tie game, walked leadoff man Mitch Haniger on four pitches. Haniger of course stole second on Betances and of course Austin Romine’s throw wasn’t particularly close. Segura’s bunt moved Haniger to third with one out.

With the go-ahead run at third and one out, the Yankees brought the infield in, and they got exactly what they needed. Betances broke Robinson Cano’s bat and the weak grounder went right to Hechavarria. Here’s the moment Hechavarria receives the grounder: 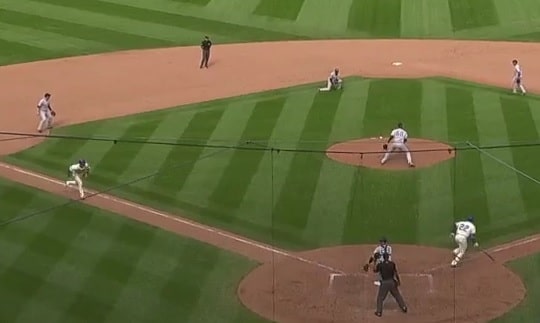 Haniger was dead to rights. Hechavarria gets him with ease with a good throw. Instead, the throw was wide, and Romine couldn’t get back across the plate in time to apply the tag. Haniger slid in safely to give the Mariners at 3-2 lead. Between that throw and the abysmal strikeout with the bases loaded, it was a pretty terrible game for Hechavarria. A walk, a steal, a bunt, and a weak grounder at an infielder who threw wide of home. I hate this sport sometimes.

And, to really rub it in, Haniger made a great full extension diving catch for the 27th out to end the game. McCutchen was on first base after being hit by a pitch and Giancarlo muscled a broken bat looper to shallow right. Seemed like it had a chance to find grass. Haniger made the headlong dive to make the catch. What a frustrating ninth inning, top and bottom halves.

Leftovers
As is often the case, the Yankees lost Sunday because they stranded a small army of baserunners. Three times Luke Voit was on second base and zero outs. He scored zero runs. The Yankees wasted Voit’s leadoff reach-on-error in the second, Andujar’s leadoff infield single in the fifth, Voit’s leadoff double in the sixth, and Gary Sanchez’s leadoff walk in the eighth. Pinch-runner Tyler Wade made it to third base with two outs in that eighth inning. That was the closest the Yankees came to scoring after loading the bases in the fourth. They went 2-for-15 with runners in scoring position. Gross.

Chad Green was dominant between Sabathia and Betances. He struck out three and retired all six batters he faced in the sixth and seventh innings. It was his first appearance in five days and his second appearance in ten days. I hope to see Green work more multi-inning outings going forward. That’s when he’s at his best. Fewer appearances with multiple innings each time out is better than more appearances with one inning each time out.

Seven total hits for the Yankees. Andujar (single, double) and Voit (single, double) had two apiece. Stanton had his double (“double”), Walker blooped a single, and Torres lined a single. McCutchen, Sanchez, and Gardner each drew a walk. McCutchen was also hit by a pitch. Three hits, three hit-by-pitches for McCutchen as a Yankee.

Up Next
The six-game West Coast swing is over and the Yankees are heading to Minnesota for a three-game set. Lefty J.A. Happ and righty Kyle Gibson are the scheduled starters for Monday night’s opener. That’s an 8:10pm ET start because the rest of the world still refuses to adopt Eastern Time. Rude.