So close to a thrilling comeback. Instead, it goes into the books as an 8-7 loss to the Rays. Drat. The magic number for the top wildcard spot remains two as of this writing. It could drop to one pending the outcome of the Athletics vs. Mariners game out on the West Coast.

A Good Start, A Bad Start
Wonderful start to the game. Andrew McCutchen led off the top of the first with a single, Giancarlo Stanton worked a two-out walk, and Neil Walker smashed a three-run dinger over the center field wall for a quick 3-0 lead. I was watching Kevin Kiermaier in center and, at first, it looked like the ball would sail over his head. Then he slowed down and made it seem like he was in position to make the catch. And then he watched it go over the wall. Hooray. 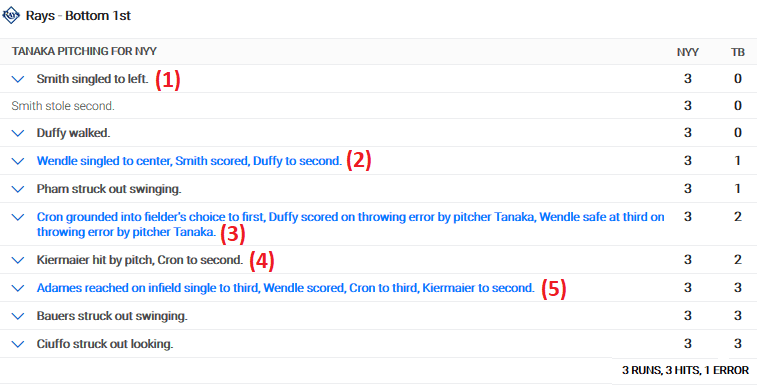 (1) For the second straight start Tanaka’s splitter seemed to move more side-to-side than down and out of the zone. The Mallex Smith leadoff single came on a 1-1 splitter that went left-to-right, and he poked it into left field. Smith then stole second and Tanaka walked Matt Duffy on five pitches. Two of the five pitches were splitters that didn’t dive. Just like that, the Rays had two on with no outs.

(2) Joey Wendle’s run-scoring single was a ground ball back up the middle and it did not come on a splitter. Tanaka was ahead in the count 1-2 and he gave him a fastball. A 91 mph heater that wasn’t elevated enough, and Wendle shot it back up the middle. One run in, two runners on base, no outs. Not good! At least Tanaka was able to strike out the molten hot Tommy Pham — Pham came into this game hitting .344/.441/.617 (189 wRC+) in 34 games with the Rays after coming over from the Cardinals at the trade deadline — for the first out, so that was good.

(3) Tanaka is an excellent defensive pitcher. One of the best I’ve ever seen. He’s as sure-handed as they come and he generally makes very good decisions in the field. But I have absolutely no idea what he was thinking on this play. Look at this. Just look:

File that under “trying to do too much.” Tanaka had no play at second base — no easy play at second base, I should say — and he should’ve flipped the ball over to first base for the second out of the inning. It seemed obvious as the play was unfolding. Tanaka’s throw sailed into center field, a run scored, and the runner was able to move up to third. The win probability numbers real quick:

That’s a pretty big win probability swing in the first inning! Anyway, Tanaka’s error was his first fielding error in MLB. For real. He made one error in his first 820.1 innings with the Yankees and it wasn’t a fielding error. He threw away a pickoff throw in 2016. Bad time for Tanaka’s first fielding error as a Yankee. I guess there was never going to be a good time for it, but this was especially bad. (Tanaka made a similar play on a bunt later in the game and got the out at second, and also successfully started a 1-6-3 double play, so he didn’t shy away from throwing to second base after the error.)

(4) If this were the Wild Card Game, I’m pretty sure the bullpen would’ve been going after Wendle’s single and Tanaka would’ve been out of the game after the error. That’s my guess. It’s not the Wild Card Game though, so Tanaka remained in, and he lost Kiermaier to load the bases with one out. Got ahead in the count 0-2, couldn’t get him to bite on a low splitter or an elevated fastball, then he hit him in the foot with a slider. Groan. Kiermaier left the game an inning later with a hairline fracture in his foot, the Rays say. Ouch. That was a costly hit-by-pitch.

(5) This was not going to be an easy play, but, once again, Miguel Andujar’s slow transfer cost the Yankees in the field. Willy Adames hit a chopper to third, Andujar had to back up a bit to field it cleanly, then he double clutched and Adames beat the throw. The YES Network had a great replay from the outfield that showed Andujar field the ball, get himself into throwing position, unnecessarily double clutch, and then throw to first.

That little hesitation cost the Yankees an out. A run scored to tie the game and the bases remained loaded with one out. Tanaka was able to strike out Jake Bauers and Nick Ciuffo to escape the inning and prevent further damage.

Tanaka settled down after the first inning but not really. He retired ten of the final 13 batters he faced and one of the baserunners was a Pham leadoff home run in the third inning. Another was Brandon Lowe’s leadoff single in the fifth to end Tanaka’s night. I hate hate hate going batter-to-batter. Jonathan Holder had been warming up since the first inning. Let him start the inning clean! Bah. Joe Girardi went batter-to-batter all the time and it drove me nuts.

Tanaka’s final line: 4 IP, 6 H, 4 R, 3 ER, 1 BB, 4 K on 80 pitches. What does this mean for the Wild Card Game? Beats me. I’d like to think the Yankees aren’t going to make the Wild Card Game starter decision based on who pitched the best most recently, but who knows. Unless the Yankees do something weird and unexpected like use Tanaka in relief over the weekend or start him on short rest Sunday, his regular season is over. He finishes with a 3.75 ERA (4.01 FIP) in 156 innings.

Too Little, Too Late
In the middle innings, the Yankees had their best chance to make this a game in the fifth. McCutchen worked a one-out work and Aaron Judge followed with a one-out single. Luke Voit had a marvelous battle with hard-throwing righty Yonny Chirinos. He swung through two inside two-seamers for a quick 0-2 count, then went ball, foul, foul, ball, foul, line drive single to center. Chirinos was throwing 95 mph bowling balls. His fastball was running all over the place. It was a great at-bat by Voit.

The problem? McCutchen got a poor read on the line drive single and initially retreated to second. He advanced to third on the play but should’ve scored from second on the single to the tie game 4-4. McCutchen’s been so good with the Yankees. So, so good. That was his first real glaring mistake. Sure enough, with the bases loaded and one out, the next batter (Stanton) grounded into an inning-ending 5-4-3 double play. One of those games.

After David Robertson (and Justus Sheffield) let the game get out of hand in the eighth, the Yankees of course made things interesting in the ninth. Very interesting. A walk (Gary Sanchez) and two singles (Brett Gardner and McCutchen) loaded the bases with one out. Judge shot a single over Adames at shortstop to score one run and bring Voit to the plate as the tying run. Voit almost tied the game. Almost. It looked damn good off the bat.

Smith couldn’t make the catch at the wall — that would’ve been a spectacular catch — and two runs scored. Judge had a tough time reading the play as he rounded second base, so he held up a bit, and that forced Voit to retreat back first. That was not nothing. Voit represented the tying run and he couldn’t move into scoring position. Stanton, the next batter, hit a grounder to third that Wendle tried to turn into a 5-4-3 double play, but couldn’t. The throw was wide of the bag and everyone was safe. Judge scored and the Yankees were down just 8-7.

At this point the Yankees had runners on first and second with one out. Due up was not Walker. It was Tyler Wade. Wade pinch-ran for Walker earlier in the game, after Walker was hit by a pitch when the score was tied 4-3. (X-rays on Walker’s shin came back negative.) Wade battled Sergio Romo for eight pitches but eventually flew out to right. Andujar then hit an anticlimactic foul pop-up wide of third base on the first pitch to end the game. The tying run was left at third. Back-to-back three-run half-innings at the start of the game and back-to-back four-run half-innings at the end of the game.

Leftovers
Aside from the whole batter-to-batter thing, I loved the way Boone used his bullpen. The Yankees were down one and he went to his late-inning relievers. Holder pitched the fifth, Chad Green pitched the sixth, Aroldis Chapman pitched the seventh, and Robertson pitched the eighth. Robertson’s (and Sheffield’s) bad inning proved costly. Green was especially dominant. In fact, in his last two outings, he threw 26 fastballs, opponents swung at 15 of them, and they missed on eleven (!). Golly.

Greg Bird has been relegated to decoy status. With a runner on first and two outs in the sixth inning, Bird was announced as a pinch-hitter for Adeiny Hechavarria against righty Chaz Roe, and the Rays countered with southpaw Jose Alvarado. Gleyber Torres then pinch-hit for Bird. It didn’t work (Gleyber struck out) but it was the right idea. The Yankees got the more favorable matchup. Bird has two starts and three pinch-hitting appearances in the last 26 games (ten plate appearances). He is a non-entity.

And finally, Walker’s home run was the 256th home run of the season for the Yankees. That is the fifth highest single-season home run total in history and eight short of the record held by the 1997 Mariners. Can the Yankees hit nine home runs in the final four games to break the record? It won’t be easy, but it is definitely doable.

Box Score, WPA Graph & Standings
Head on over to ESPN for the box score, MLB for the video highlights, and then ESPN for the updated standings. Here’s our Bullpen Workload page and here’s the loss probability graph:

Up Next
The Yankees’ last game in Tropicana Field until next season. Thank goodness. The Yankees and Rays will wrap up this four-game series with a 1pm ET game Thursday. CC Sabathia is making his final start of the regular season in that one. Jaime Schultz will be the opener for Tampa.