Last week longtime RAB reader and commenter whozat shot me an email asking me if there was any reason to expect Brett Gardner to develop into a better Major League player than Joey Gathright. The comparison between the two players obviously makes sense since they’re both speedy outfielders who don’t hit for much for power, except that Gardner is called gutty and gritty because he’s white while Gathright is called exciting and athletic because he’s black. I noted in my reply that Gardner had hit for more power in the minors, but overall they had similar career paths and I really wouldn’t expect Gardner to be all that much better than Gathright in the future.

However, I took a deeper look at the numbers over the weekend, and there aren’t many similarities between the two players beyond physical attributes. One obvious difference is that Gardner was a third round draft pick out of a solid college program while Gathright was a 32nd rounder after the then-Devil Rays found him in a Louisiana adult league. Luckily though, the two players took an extremely similar path to the big leagues, although Gathright’s career began four years before Gardner’s.

Both players were drafted at age 21 and then assigned to a low level squad in the minors (Gardner went to the short season NY-Penn League, Gathright to the Low-A South Atlantic League). Both players started their age 22 season at the High-A level and earned a midseason bump to Double-A, then started the next year back at Double-A before being promoted to Triple-A in the middle of the season. In their age 24 season, their third full professional season, each player started the year in Triple-A before being called up to the big leagues during the summer and finishing the year there. It’s amazingly awesome and convenient that both guys spent their same age seasons at the same levels (and had similar plate appearance totals, no less) despite all the promotions. It made this analysis a ton easier.

I’m going to use three factors to compare Gardner and Gathright: Isolated Discipline, Isolated Power, and Stolen Base Success Rate. Isolated Discipline (or IsoD) is OBP minus AVG, and measures a player’s on-base skills beyond batting average. Isolated Power (IsoP) is basically the same thing except with SLG instead of OBP, and measures a player’s extra base hit power. Stolen Base Percentage is what it is, that’s self-explanatory. Let’s start with the most important thing, on-base skills. 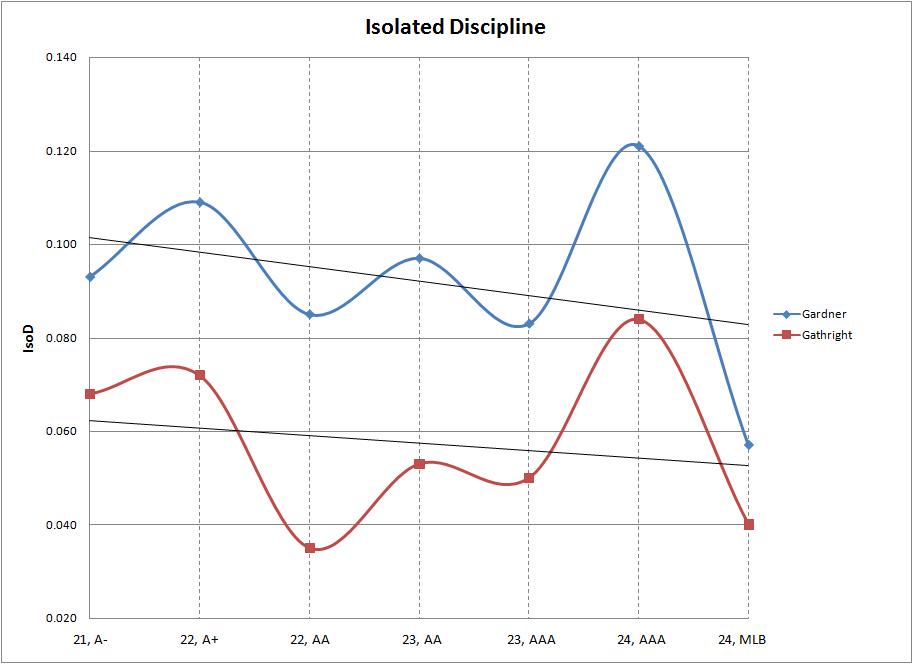 Along the x-axis is the player’s age and level, and you can click on any graph in this post to get a larger view. Since the players didn’t play in the same leagues or ballparks, I used the wonderful MLE Calculator to neutralize each player’s stats. Gathright earned a September call-up in his age 23 season, but we’re talking about 19 games and 52 at-bats, so I left that data out. It’s irrelevant here.

So, there’s some interesting stuff going on here. Gathright shows the same tendency as Gardner of struggling in his first attempt at a new level, however Gardy’s demonstrated much stronger overall on-base skills, typically around forty IsoD points better. Each player’s IsoD declined as they climbed the ladder, which is somewhat expected, although Gardner’s rate of decline was roughly twice that of Gathright’s (the slope of Gardner’s trendline is -0.0031, Gathright’s is -0.0016). If we were to remove the Major League stats at age 24, the declines become less drastic, so don’t worry too much about it especially when the players have already shown the propensity to struggle in their first attempt at a new level.

Forty IsoD points is a huge difference though, especially when there are concerns about a player’s ability to hit at the big league level. Gardner appears to be a much better bet to remain productive in the big leagues than Gathright because of his superior ability to get on base via secondary methods. It’s worth noting that in his four Major League seasons, Gathright’s IsoD has remained in line with his minor league totals, right around .060 each year. Let’s move on to IsoP. 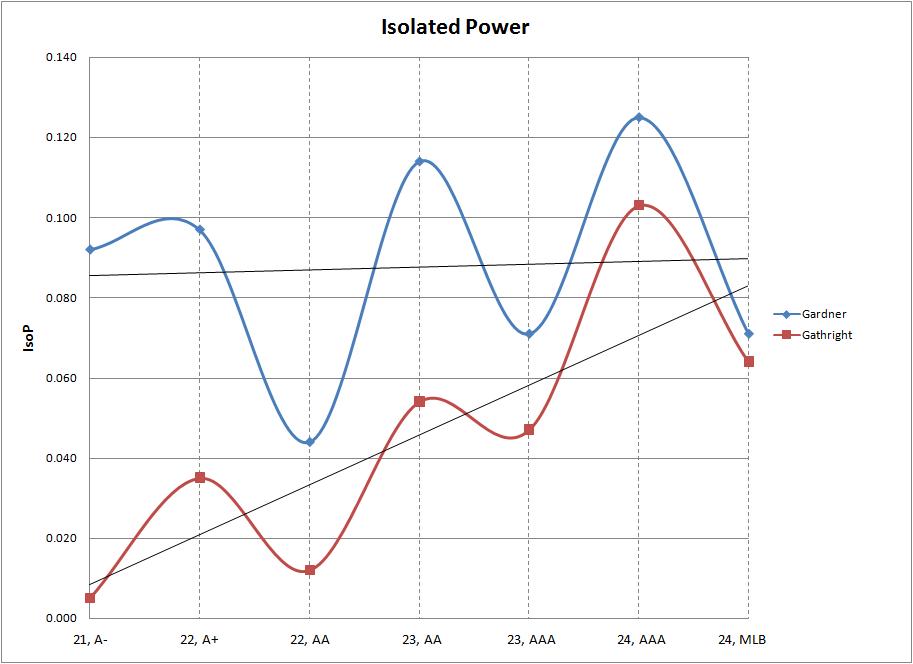 Again we see the same “struggle initially at a new level” trend, but Gardner’s ability to hit for power basically hasn’t improved in his nearly four year long career. Gathright, on the other hand, showed considerable improvement in his power hitting ability as he matured both physically and as a professional player, making very encouraging progress every year as he advanced. While all that improvement is nice, the fact of the matter is that Gathright never hit for the kind of power Gardner has, and that’s kinda sad when you think about it. Gathright’s improved ability to hit for power didn’t last long either. His IsoP during the four years in which he spent significant time in the majors (2005-2008) has steadily declined, going from .064 to .055 to .035 to a measly .018 last year. 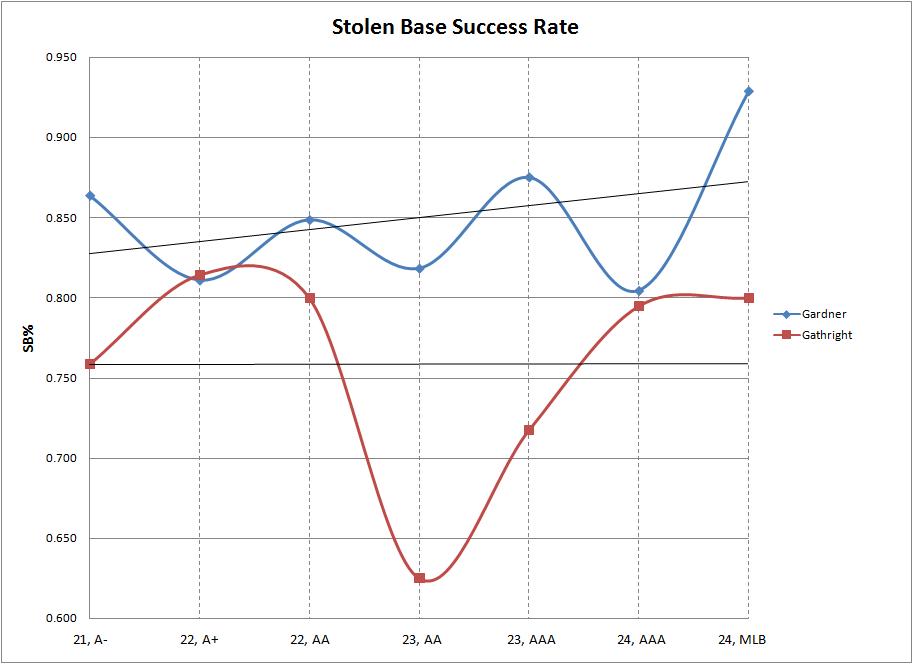 There’s really not much to see here. Both guys are high volume base stealers and are both above that 72-74% break even point. Gardner’s a bit more efficient and has improved his base stealing ability over time, while Gathright has consistently been around that 75.5-76% mark (save for that age 23 outlier at Double-A). When you’re talking about as many stolen bases as these guys attempt, that 8 or 9% separation between the two players can mean a difference of as much as five swipes a year. But you can’t steal first, of course.

In conclusion, I want to change my response to whozat’s email and say that yes, we can expect Gardner to be a more productive big leaguer than Joey Gathright. He’s shown better on base skills and a better ability to hit for power throughout his minor league career, and he’s a much more efficient basestealer. Simply put, Gardner’s proven to be much more capable of turning his physical gifts into baseball skills, and in turn, offensive production. Does this mean that Brett Gardner will be the next Rickey Henderson? Hells no, it just means that there’s enough evidence for me to expect him to be better than a .293 wOBP player.