Before Joe Girardi managed to grab defeat from the jaws of victory with his bullpen moves, Joba Chamberlain pitched well in his first start of the year, allowing just one earned run in six innings. He threw only 88 pitches because he hadn’t gone beyond the 75 pitch plateau during Spring Training, and predictably worked off his fastball. Here’s the breakdown: 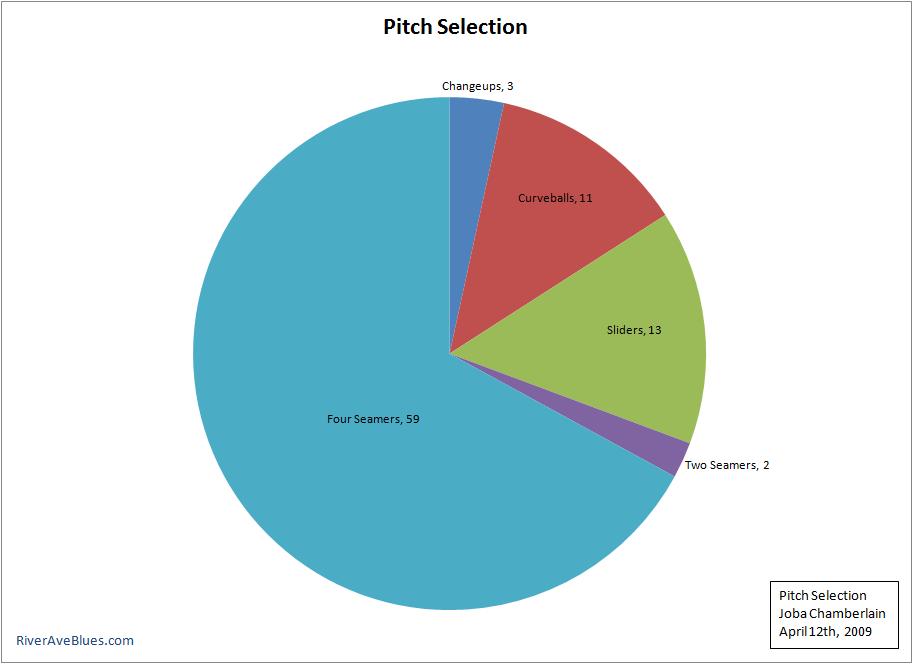 I’m guessing that the two seamers are just four seamers that Pitch f/x did a shotty shoddy job of identifying. The percentages (~69% fastballs, ~27% breaking balls, ~4% changeups) are right in line with what he’s done the past two seasons. Here’s the pitch trajectories, remember to click for a larger view: 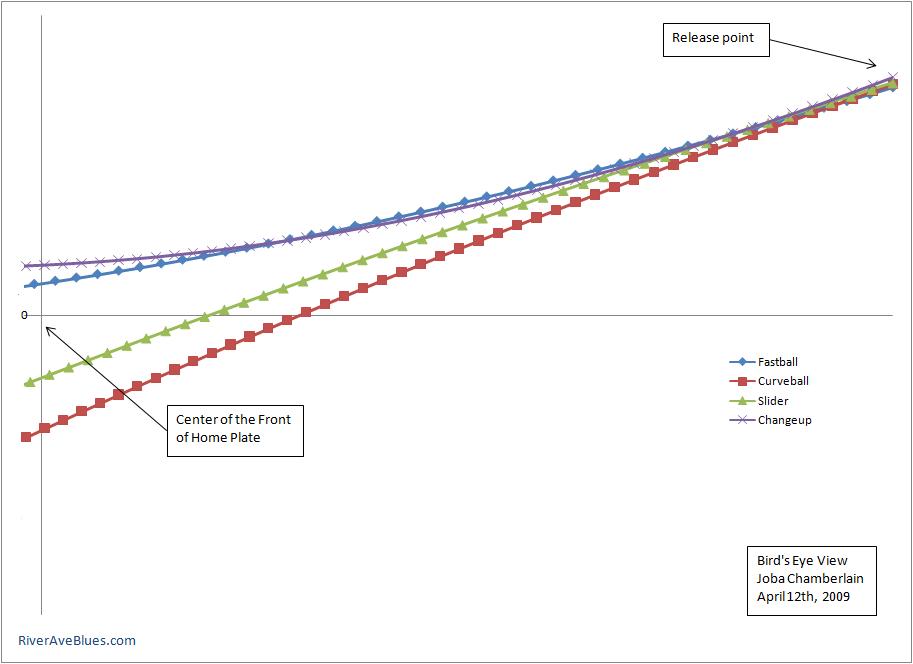 Fastballs and changeups go one way, breaking balls go the other. That’s typically how it works. Here’s the look in from first:

It’s cool to see just how much Joba’s offspeed pitches drop compared to his heater. Seeing this, it doesn’t come as much of a surprise that he generates so many awkward looking swings and misses. Here’s what Jose Molina was seeing from behind the dish: 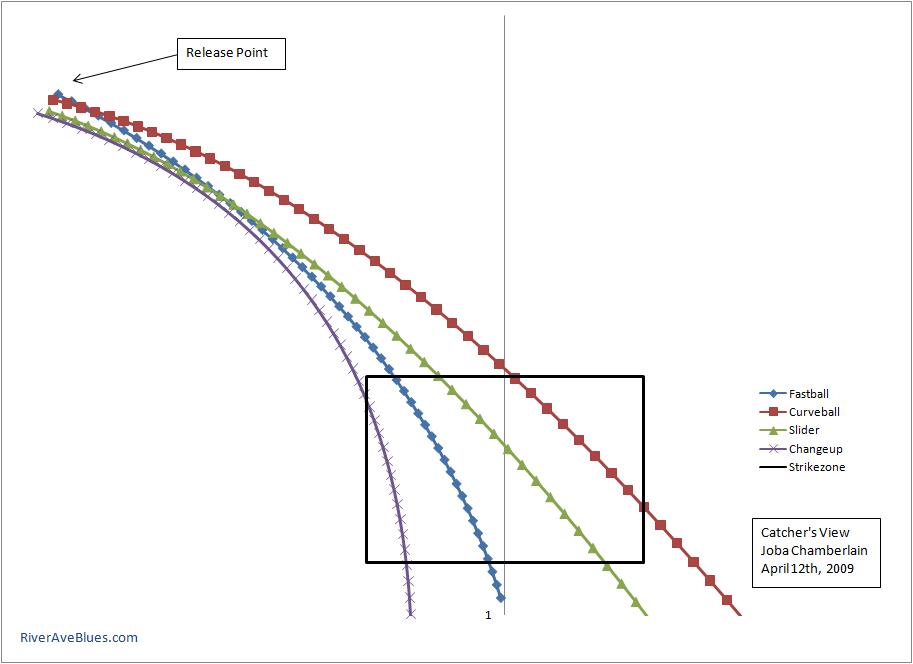 I heart this view. It takes Joba’s fastball just under 0.39 seconds to go from his hand to the front of the plate, but it takes his slider about 0.45 seconds to make the same trip. Look at how similar the two pitches look until they’re about two-thirds of the way to the plate, when they split up and head in different directions. I’ll repeat what I said above: it doesn’t come as much of a surprise that he generates so many awkward looking swings and misses. Here’s a look at his release points: 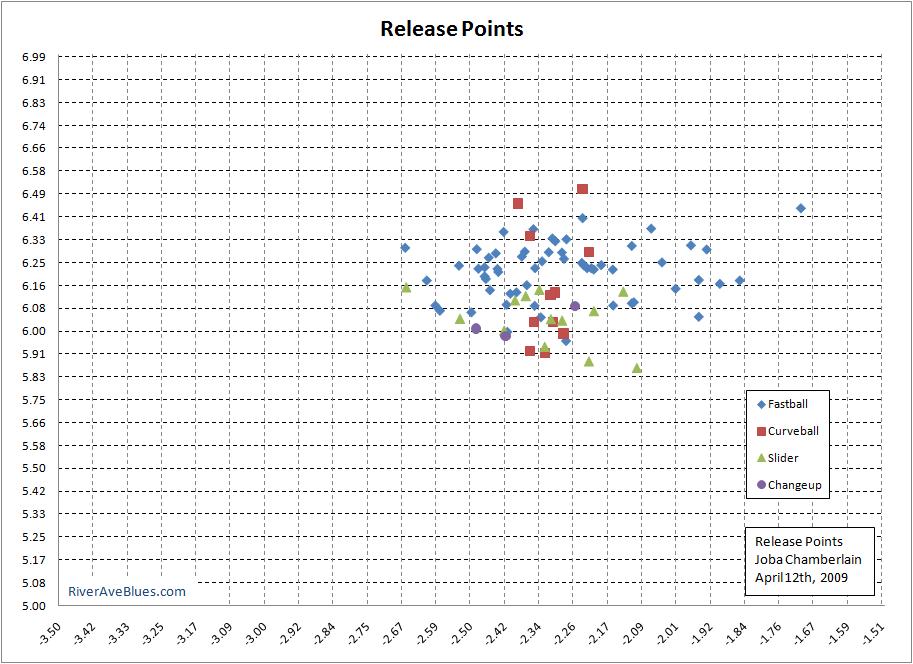 I’m going to start plotting these graphs on the same 2-foot by 2-foot grid that’s 18-inches from the center of home plate horizontally and 5-feet above the ground vertically. That way you can see where Joba’s pitches come from compared to say, Chin-Ming Wang’s or AJ Burnett’s. Joba was very consistent with his release point yesterday, fitting everything into a 9-inch tall by 10-inch wide box, except for that one extraneous fastball. He probably stood more towards the first base side of the rubber during that pitch, whether he realized it or not.

Much like Andy Pettitte on Friday, Joba released all his pitches from practically the same spot. Combine that with how similar his fastball and slider look alike until it’s too late, and … well … it doesn’t come as much of a surprise that he generates so many awkward looking swings and misses. Lastly, let’s take a quick look at his fastball velocity:

The blue line is the velocity of the pitch out of his hand, the red line is the velocity of the same pitch when it crosses the plate. Joba sat 90-94 all day, touching 96, which isn’t the same 100 mph heat we’re used to seeing when he works out of the bullpen. He’s not going to throw that hard as a starter, he’s just not, but 90-94 touching a six is above average velocity and more than enough to be a dominant starter.

You can see that Joba’s fastball lost a little life as the game wore on, evidenced by the decrease in velocity at the plate. The ball was still coming out of his hand fine, but it just lost that little extra oomph as the game went on. No big deal, it’s actually pretty normal, but it’s just cool to see.

I’m not going to break down every start of the season like this, but I’ll check in every so often when someone puts together a great start or fires a stinker. Once we get a little more data for this season, I’ll take a look at some of the relievers, specifically Mariano Rivera and Edwar Ramirez because they’re “one trick ponies.” Oh, and if you’re every looking for one of these posts, search for the Pitch f/x tag.

Update (11:21am): A.D. asked to see the release point of the slider that Joba hung and John Buck appropriately deposited into the seats for a homer.It’s the big orange one: 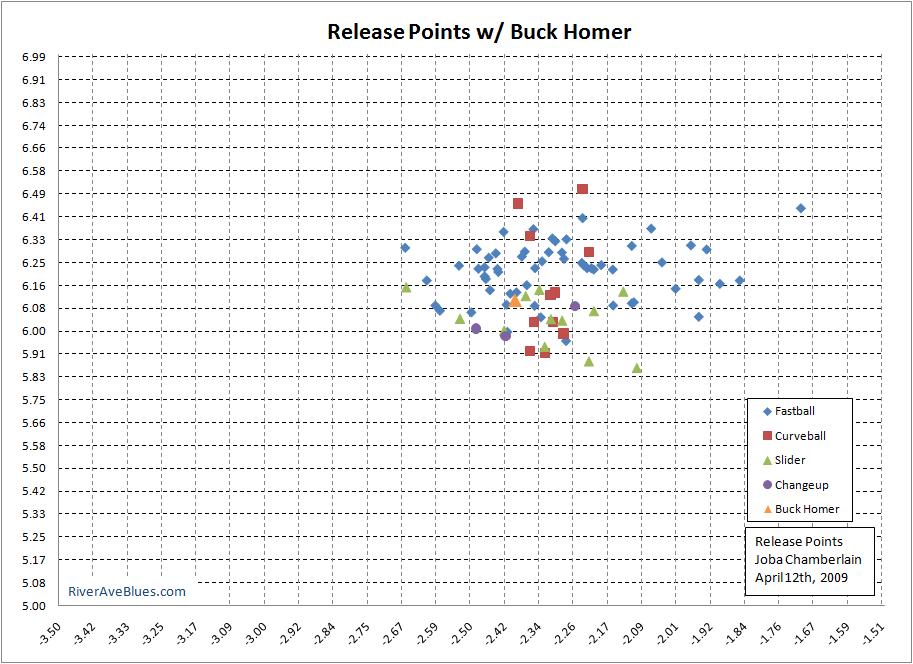