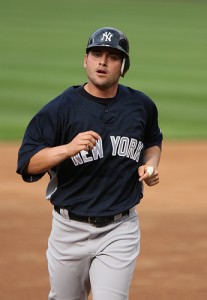 When Frankie Cervelli was sent down to Triple-A Scranton following Jose Molina’s return from injury, Joe quipped that he was one of the most beloved sub-.300 OBP Yankees in recent memory, which is certainly true. That little remark led to a conversation in the comments about the best seasons by a player with a sub-.300 OBP, and thus the idea for this post was born.

Since there’s no baseball to talk about for a few days, I figured now was as good a time as any to have some fun and with a post like this. Now, you have to understand that “best offensive season” is a relative term, because any season with a sub-.300 OBP is pretty terrible. To determine which seasons were the best, I used wRC, or weighted Runs Created. You can learn more about it here, but it’s basically a measure of the amount of runs a player creates based on weighted on-base percentage, or wOBA. If you don’t know what that is, then read this. It’s basically a fancier version of OPS that properly weighs all the things a hitter can do to produce value using linear weights. It’s kind of complicated, but it’s a very useful stat.

To narrow the search a bit, I limited it to players with a .300 or worse on-base percentage in a season from 2000-2008, minimum 400 plate appearances. Remarkably, there have been 148 instances by 109 different players in the last nine years when someone made outs 70% of the time or more in a  season. Thankfully, none of them are Yankees the only Yankee on the list is old buddy Scott Brosius. As you’d probably expect, most of the players are all glove/no hit guys like Rey Ordonez, Cesar Izturis and Pokey Reese, but there’s a few All Stars (Michael Young, Freddy Sanchez, Aramis Ramirez), some future Hall of Famers (Pudge Rodriguez, Craig Biggio), and even one current Hall of Famer (Cal Ripken Jr.) mixed in.

I’m not going to go through every player, I’ll just highlight the five guys who had the “best” offensive seasons with a sub-.300 OBP. If you want to see the full list sorted by wRC, click here.

After a breakout season in 2007 in which he hit .295-.353-.539 with 24 homers and 23 stolen bases, Hart’s plate discipline went south the next year as he walked nine fewer times in 91 more plate appearances. Hart’s problems were exacerbated by a brutal late season slump, when he hit just .194-.216-.302 from mid-August on. Despite all that, the Brewers’ rightfielder finished second in the NL with 45 doubles and was voted into the All Star Game on the Final Vote. Hart’s overall production has gone down every season since his breakout.

A year after being acquired in the Javier Vazquez trade, Young started his rookie season in 2007 as the Diamondbacks Opening Day centerfielder. His 32 homers were a testament to his freakish raw ability, but the .295 OBP and 141 strikeouts in 624 plate appearances (one every 4.42 PA) showed their was still some development left to be done. Young finished a distant fourth in the Rookie of the Year voting, but his hacktastic approach continues to hold him back.

It seems like he’s been around forever (at least to me), but 2005 was Reyes’ first full and healthy season in the majors after leg injuries hampered him the previous two years. The speedy leadoff hitter amassed gaudy triple and stolen base totals, but his 27 walks are like, a third of what you’d like to see out of the guy setting the table for you. Luckily for the Mets, the then 22-yr old Reyes has improved his eye at the plate and is a bonafide star. Except in September.

Unlike the other players in this post, Greene was pretty much an established big leaguer when he had his sub-.300 OBP season. 27-yrs old and in his fourth full season, Greene actually had his best power season by far in ’07, but it came at the expense of not making outs. His once promising career has since evaporated, but more than a bad batting eye is at work here.

The second Padre on the list, Kouzmanoff is a bit of an interesting case because the dude has a .395 career OBP in the minors. Yet in 2008 he drew just 20 (!!!) unintentional walks in 668 plate appearances. That is … incomprehensibly bad. I mean really, I’m not even mad, I’m impressed. Or, actually unimpressed. Whichever one fits. Kouz’s power output is the only thing that qualifies him for the list of “good sub-.300 OBP seasons.” Amazingly, Kouz’s OBP is down to .280 this year. Yikes.

Those five guys had a best offensive seasons with a sub-.300 OBP this decade, but we need to take a moment to marvel at the season current Reds shortstop Alex Gonzalez had with the Marlins in 2000. His batting line in 407 plate appearances: .200-.229-.319, 40 OPS+, 18.3 wRC. How the hell do you let a guy hitting like that come to plate 407 times in one season?!? How? It’s madness. And the crazy part is that the Marlins weren’t Mo awful that year, finishing just three games under .500. We don’t have any advanced defensive stats going back that far, but Gonzalez must have been gobbling up everything hit within a 20 yard radius to justify playing pretty much every day with that bat.

Otherwise, there you have it. The best seasons with a sub-.300 OBP of the millenium. Of course when you put together a post like that it’s only fair to look at the other side of the equation, so tomorrow we’ll take a look at the worst offensive seasons by a player with a .400 or better on-base percentage.