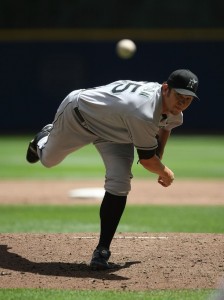 Late last week we got word that contract extension talks between the Marlins and righthander Josh Johnson had reached a stalemate, and there doesn’t appear to be any way around it. “We made it clear that it was going to be this year or it wasn’t going to happen,” said Matt Sosnick, Johnson’s agent. “It was now or never. And the Marlins agreed.”

Johnson’s camp was looking for Zack Greinke money (four years, $38M), but the Marlins reportedly offered just three years and $21M, which is Nate Robertson money. Instead, the two sides are now preparing their arbitration cases, which should result in Johnson making somewhere around $5M in 2010. A team friendly salary for sure, but the Marlins are looking at a $36M payroll for next season with $32M already committed before arbitration raises to Johnson and nine others. The Fish will surely trade off some expensive players this offseason, it’s what they do.

Considering where he is in his career, Johnson’s trade value is as high as it can be. He had a tremendous season in 2009 (5.5 WAR) and still has two years of team control left. As we’ve seen in the past, guys with just one year of control left don’t bring as big of a return. The price will surely be steep, but if you’re going to unload some of your best young players, Johnson is the kind of guy you do it for.

There’s always concern whenever you import a pitcher from the National League and stick him in the AL East, however Johnson isn’t like most pitchers. He has true front-of-the-rotation power stuff that enables him to do the two best things a pitcher can do: strike guys out and generate ground balls. Here’s the list of pitchers who struck out at least eight batters per nine innings, walked no more than two-and-a-half batters per nine innings, and got at least three groundballs for every two flyballs in 2009:

That’s it. Not Felix, not Lincecum, not even Greinke. No one else. Just JJ. His fastball is a legit mid-90’s heater, and he backs it up with a sharp mid-80’s slider and split-change that he probably doesn’t use often enough. He’s got a huge powerful frame (listed at 6′-7″, 250 lbs on the Marlins’ site) that screams durability and innings eater. The Yankees got a first hand look at him on June 20th of this year, when he allowed just three hits and one run over seven innings against our beloved Bombers. Here’s the video highlights from that game.

Joe Girardi is familiar with Johnson, having managed him in Florida during his rookie campaign in 2006. Of course, there’s the incident in when Girardi sent Johnson back out to mound after an 82-minute rain delay, which was followed by Johnson experiencing some forearm tightness, and soon enough Tommy John surgery. That’s the only injury of Johnson’s career, so it’s not much of a red flag considering how well he’s recovered. In fact, his innings buildup had been textbook up to that point.

Johnson was drafted in 2002, hence the partial minor league season. He probably threw another 40 IP in high school that year, so don’t sweat the big jump. The rain delay game was on September 12th, 2006, what ended up being his last outing of the season. If he finishes off the month healthy, he’s probably at 180 IP with a +28 IP increase on the season.

Looking around at some other instances in which a pitcher of Johnson’s age, caliber, and cost were traded, the return seems to be pretty consistent: two top young players with two or fewer years of service time, plus some lesser prospects. Think Javy Vazquez (the first trade), Dan Haren (the second trade), and Josh Beckett. All three fetched two young stud players plus some lesser prospects. Let’s use that as a blueprint.

As I see it, the Yanks have three players that qualify as true studs: Joba Chamberlain, Phil Hughes, and Jesus Montero. Austin Jackson is a notch below those guys. As for Joba and Hughes, I think you have to draw a line and make it one or the other, not both. That means Montero has to be included in the deal. Fine. That’s life, you have to give something to get something. The Marlins have been looking for a catcher of the future for years, and Montero would fit that bill. Plus they could always flip him elsewhere. Whatever they end up doing with him, I don’t really care.

Getting back to Joba and Hughes; both have four years of team control left, but Joba has proven more in the big leagues up to this point, primarily by staying healthy as a starter over a full season. I consider both guys to be interchangable, and I don’t really have a preference who stays and who goes. I know it’ll hurt, but think about it, if those guys reach their ceiling, what will they be? Well, pretty much what Josh Johnson is right now. I don’t see how you’d have a problem giving up a young guy that might turn into that kind of a pitcher for a young guy that already is that kind of pitcher. I guess you can let Florida pick between them, then begrudgingly agree to make it sound like they got the guy you want to keep. Whatever, I’m not exactly an expert at negotiating.

As for the rest of the package, I’d make pretty much everyone else in the farm system fair game, plus the younger guys in the big leagues: Melky Cabrera, Brett Gardner, Ramiro Pena, Frankie Cervelli, David Robertson, and Phil Coke. Florida wouldn’t have any interest in Robbie Cano because a) he’s getting expensive (owed $19M over the next two years), and b) they already have a second baseman in Dan Uggla. Even if Uggla’s traded, Rookie of the Year Chris Coghlan would take over at second, his natural position.

Obviously some guys are more valuable than others based on where they are in their careers. K-Rob™ is more valuable than Mark Melancon, Ramiro Pena is more valuable than either Eduardo Nunez or Reegie Corona, etc. You’d prefer to keep the guys already in the big leagues, even if means giving up that one extra second or third tier prospect. Let’s assume that Zach McAllister – who is basically the Yanks’ best starting pitching prospect in the minors – is part of the deal, as is Eduardo Nunez. The names really aren’t important, I’m more concerned about prospect status. Any combination of a Grade-B and a Grade-C prospect will work. If you want to call it Arodys Vizcaino and Abe Almonte, that’s fine with me, I don’t care.

So, is a Johnson for Joba, Montero, McAllister, and Nunez fair? Thanks to the wonderful world of spreadsheets and sabermetrics, we can find out. Using the trade value calculator created by Sky Kalkman of Beyond the Box Score and my WAR/salary assumptions, we can determine that Johnson has a trade value of $52.6M, while Joba is worth $31.8M in a trade. Victor Wang’s research says that top 10 hitting prospects (Montero) are worth $36.5M, Grade-B pitchers (McAllister) $7.3M, and Grade-C hitters age 22 or younger (Nunez) $0.7M. That makes the total value of the Yanks ‘package $76.5M.

So yeah, maybe that package would be overpaying. Perhaps Florida should kick in a prospect, or maybe even one of their nine other arbitration eligible players since they’re looking to unload some of those guys. I’m not going to get hung up on a difference of 45.4% when there are so many assumptions in play. On the surface, that four player package is at least on par with what the Red Sox gave up to get Josh Beckett, if not greater. However, the Yanks aren’t absorbing $18M worth of Mike Lowell, and Josh Johnson now is better than Beckett was then (Beckett’s WAR the year before the trade was 4.0). Beckett just had the added hype of being the second overall pick and a highly touted prospect and World Series MVP. I feel comfortable saying that package is at least in the the ballpark.

It’s not often you get a chance to acquire a pitcher of Johnson’s caliber. A young, power arm with his best years still ahead of him. This isn’t 32-year-old Roy Halladay, or Johan Santana coming off a sketchy second half. Johnson’s a bonafide franchise cornerstone type of pitcher that will be paid below market value for the next two years, possibly longer if he’s down with re-opening discussions about a contract extension after a trade. He’s not Felix Hernandez, but he’s not far off. The Yankees would do well to bring him to the Bronx.

The return of the RAB Radio Show
Teixeira, Jeter finish second and third in MVP voting