River Ave. Blues » Mark Teixeira’s new stance
Yanks have kicked the tires on Bloomquist, out on Dunn
RAB on The Shore Sports Report

As I was watching the Yankees pound Fausto Carmona last night, something caught my eye. To make sure I wasn’t crazy, I consulted both Joe and Ben, who confirmed my suspicion: Mark Teixeira has opened his stance. Not from last year either, I’m talking about from just last month. Given his horrible start and recent hot streak, it makes sense that he and Kevin Long tinkered and made some adjustments to help right the ship, but usually the untrained eye can’t pick those adjustments up.

Of course, I had to confirm this first. In order to avoid any issues with camera angle and what not, I screen cap’d at-bats from two home games. The top image comes from the June 2nd game vs. Baltimore (the Phil Hughes-Brad Bergeson matchup), and bottom is the July 16th game vs. the Rays (the first game after the break). Make sure you click for a larger view… 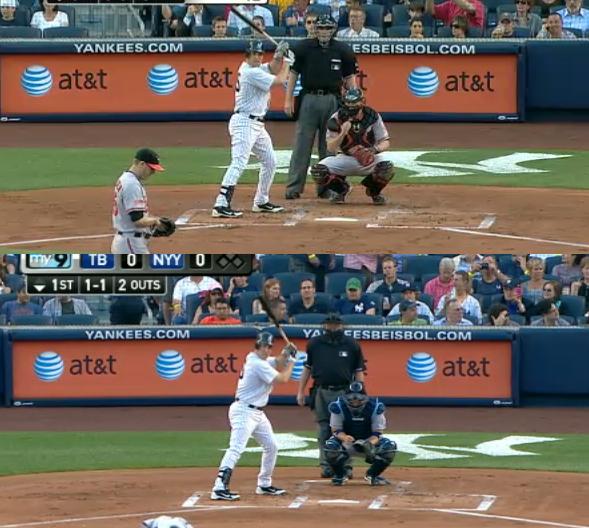 You can see Jamie Shields bending over to fix his pant leg in the bottom image. Tex is at the start of a practice swing in the meantime, which is why his hands are a bit lower, but his feet do not move at all. I just wanted to make sure I got the batter’s box in the shot to use as a reference, and Shields was in the way whenever he was on the rubber. Tex’s hands go back to their usual spot once the Shields gets ready to throw the pitch.

So anyway, you can clearly see that Tex has opened up. His front foot is closer to the edge of the batter’s box, and there’s more real estate between his feet. There are plenty of reasons why a batter would open up his stance, but the first two are obvious. First and foremost, it helps the batter see the ball better simply by providing a better line of sight towards the pitcher. Perhaps it’s helped Tex recognize offspeed pitches earlier in the pitch’s flight, he definitely doesn’t seem to be overwhelmed by them like he was in April and May.

Secondly, opening the stance helps the batter get around better on pitches in the inner half. Tex has been pulling more balls to rightfield with authority lately (spray chart during struggles, and after), hence his increased power performance. Although we know that correlation does not equal causation, it does stand to reason that opening his stance has helped Tex do a better job of getting the fat part of the bat on inside pitches.

I haven’t checked to see if Teixeira has also opened up when batting righthanded, but I’m not too concerned about that. Righthanders were killing him earlier this year, but he was performing well against southpaws. I’m not saying this new stance is why the Yanks’ first baseman has turned his season around over the last month or so, but it’s certainly interesting to see.

Yanks have kicked the tires on Bloomquist, out on Dunn
RAB on The Shore Sports Report