This past summer the Yankees did something they hadn’t done in nearly three decades: they sold at the trade deadline. Truth be told, their efforts to sell veterans and restock the farm system began last offseason, when Andrew Miller and Brett Gardner were reportedly put on the trade block. The Yankees wanted young pitching in return and found no takers, so both players started the season with New York.

Unlike Miller, Gardner was not traded away at the deadline, though I’m sure the Yankees gauged his value. They did that with everyone. Gardner remained with the Yankees all season, first as their No. 2 hitter before moving to the leadoff spot. Not surprisingly, he led the team with 634 plate appearances. It’s been three years since someone not named Brett Gardner led the Yankees in plate appearances. He’s been a mainstay atop the lineup for quite a while now.

For all the talk about his streakiness and his second half slumps — he didn’t have one this year, by the way, his numbers before and after the All-Star break were nearly identical in 2016 — Gardner has been remarkably consistent the last four years. His numbers at the end of the year always finish in the same range. Check it out:

Gardner’s walk and strikeout rates this year were the best they’ve been since 2011, and that’s pretty cool. Otherwise that’s Brett Gardner. He’s going to give you an average around .260 and an on-base percentage around .340 year after year, like clockwork. Check out his monthly splits:

In addition to plate appearances, Gardner also led the Yankees in walks (70) and pitches seen per plate appearance (4.09) this season. Does he have a tendency to look at strike three? Sure. That tends to happen when you work deep counts like Gardner. When it comes to true leadoff man skills, meaning working the count and getting on base, no one on the Yankees is better than Gardner. He’s done a fine job setting the table for this team for several years now.

The single biggest difference between 2016 Gardner and the Gardner of previous years, particularly the 2014-15 versions, was his power production. No one thinks of him as a power hitter, but Brett did smack 17 home runs in 2014 and another 16 in 2015. This year he hit seven. And that’s with power up around the league and the baseballs possibly being juiced. On the bright side, one of those seven homers was a walk-off: 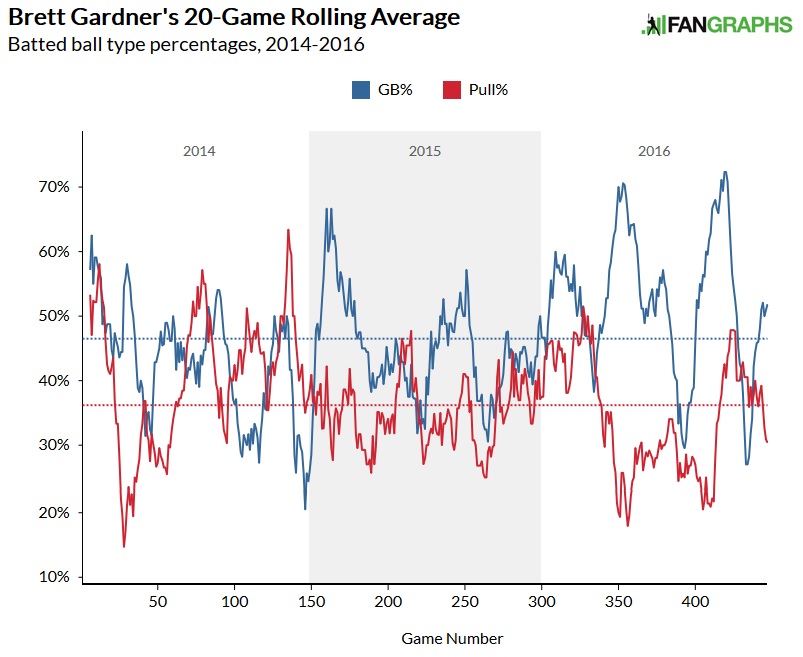 Gardner put the ball on the ground far more often this year (52.3%) than the last two years (43.2%), and he also didn’t pull the ball as often either (33.6% vs. 37.5%). If you’re a left-handed hitter playing in Yankee Stadium and you don’t pull the ball in the air, you’re not going to get any help from the right field short porch.

Contact quality was not the problem. Gardner’s hard (25.8%) and soft (16.9%) contact rates were right in line with what he did from 2014-15 (27.5% and 16.1%). The problem was launch angle, the new sabermetric hotness. Gardner didn’t get the ball airborne often enough in general, but especially to the pull side. That’s why his power dropped so much. 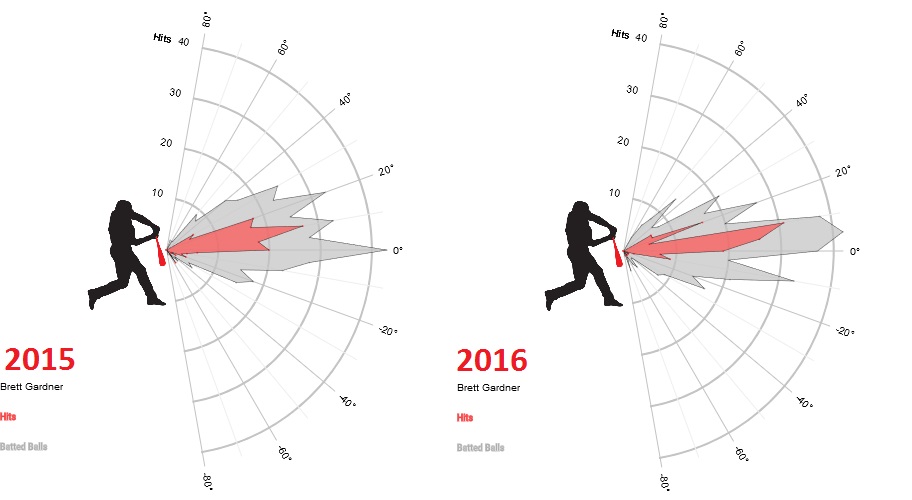 That’s a pretty cool looking graphic, but what the hell does it mean? In the simplest terms, launch angle is the angle at which the ball leaves the bat. The ideal launch angle is 10-30 degrees. Exit velocity plays a role in this, but generally speaking, 10-25 degrees gives you a line drive to the outfield and 25-30 degrees is a possible dinger.

Last season Gardner spent much more time in that 10-30 degree range. In fact, we have exact numbers: Gardner hit 117 balls in the 10-30 degree range last year and 23 in the 25-30 range. This season it was 103 and 18, respectively. Gardner put 192 balls in play below the 10-degree launch angle last year compared to 220 this year, hence the increase is grounders.

I know this doesn’t seem like a huge difference. I mean, Gardner hit only 14 fewer balls in the 10-30 degree range this year than last year. It doesn’t sound like much, but remember, we’re talking about batted balls hit at the ideal angle here. A few of these can absolutely be the difference between, say, seven homers and 15 homers.

The question now is why? Why did Gardner hit so many more ground balls last season? We can’t answer that with any certainty. It could be the randomness of baseball. His bat could be slowing as he approaches his mid-30s. Maybe his swing was a mechanical mess. Maybe he was playing hurt. Who knows? There are countless possible reasons.

Whatever it is, Gardner’s inability to get the ball in the air this season, especially to his pull side, really dragged down his power numbers. He slugged .362 with a .101 ISO in 2016. It was .410 and .152, respectively, from 2014-15. That’s a huge drop. At this point expecting 15+ homers again is probably pushing it, but with balls flying out of the park nowadays, double-digit dingers doesn’t seem like too much to ask.

What About The Steals?

Gardner is, at the most basic level, a speed player. His legs got him to the big leagues, and while his power surge from 2014-15 made his valuable in a different way, Brett is still known for his speed. Not surprisingly though, his raw stolen base totals have fallen the last few years. That tends to happen once a guy gets over 30. Stolen base ability does not age gracefully. Here are some baserunning stats with some thoughts.

1. Gardner isn’t attempting to steal much these days. Obvious statement is obvious. Not only has Gardner’s stolen base total declined the last few years, his stolen base attempt rate (SBA%) has declined too. That’s the number of attempted steals divided by stolen base opportunities, meaning the times Gardner was on first or second base with no runner ahead of him. The league average is 5.5%, though for fast guys like Brett, you’d like to see it up around 10%.

“I can’t necessarily pinpoint what it is, but obviously I was a little less aggressive. You can’t steal 40-something bases if you don’t try to steal 40-something bases,” said Gardner in Spring Training about his decline in stolen bases. “It’s not like I’ve tried to go 50 times and only been successful half of them. My percentage has still been pretty high … I think for the most part I’ve done a good job of trying to do that and being smart about when we run but we’re always looking for ways to improve.”

My guess is Gardner’s decline in steal attempts is the result of a number of factors. Age, for one. I also think there’s a self-preservation angle to this too. Stealing bases are rough on the body and Gardner has been banged up the last few years. Is it a coincidence he had his best second half in years this season after stealing fewer bags in the first half? Maybe not! No one expects a 33-year-old player to steal 40+ bases. But Gardner dipped below 20 steals sooner than I think anyone expected.

Joe Girardi has said Gardner always has the green light and it’s up to him when to run. Given his decline in stolen base rate and the fact there were several instances throughout the season when it make sense to run — late in a close game, etc. — and Gardner didn’t, perhaps Girardi should be a little more proactive and tell Brett to go. He doesn’t have to steal every time he reaches first. That’s unrealistic. But a little more encouragement wouldn’t hurt.

For example, Gardner took the extra base (XBT%) a whopping 56% of the time this year. That was top ten in MLB. The all-encompassing baserunning stats at FanGraphs (BSR) and Baseball Prospectus (BRR) rate Gardner as the seventh and 12th best baserunner in baseball in 2016, respectively. That’s out of the 971 position players to appear in a game this year. The stolen base numbers are slipping. No doubt about it. When it comes to total baserunning value, Gardner is one of the best in the game. Has been for a few years now.

There’s not much to say about Gardner’s defense. He once again had a very good defensive season, according to both the eye test and the various metrics (+12 DRS and +3.6 UZR). Gardner made his fair share of eye-popping catches as well this year. Remember this one in Anaheim?

I wouldn’t blame you if you slept through that one. It was a late night game on the West Coast. What about this catch against the Blue Jays? I know you remember this one: Brett Gardner: still very good at catching baseballs. Do we need to dig any deeper than that? Nah.

This offseason, perhaps moreso than ever before, it feels like the chances of Gardner being traded are relatively high. The Yankees committed to the rebuild by trading veterans for prospects at the deadline, and they figure to continue that this winter. Also, they need to start making room for their young outfielders. Aaron Judge arrived in August, Aaron Hicks and Mason Williams need more at-bats, and Clint Frazier is in Triple-A with Dustin Fowler not too far behind.

There are two years and $24M left on Gardner’s contract, plus a $12.5M club option for 2019, which is a very affordable rate, even with this year’s power outage. Denard Span got $10M a year last offseason. Two years ago Melky Cabrera got $14M annually and Nick Markakis got $11M annually. Gardner at $12M a year for two years is a fair price, if not below market value given recent inflation. It’s certainly not an albatross preventing the Yankees from making other moves.

Ideally the Yankees would trade Jacoby Ellsbury and keep Gardner, but that doesn’t seem to be an option. Ellsbury’s contract is a major deal-breaker for most teams. If Gardner goes this offseason, he’ll leave as a very productive homegrown Yankee who never quite seemed to get the respect he deserved. The guy went from walk-on in college to World Series winner and All-Star with the Yankees. That’s pretty darn cool.