On the heels of a relatively solid offensive season in which he posted a 109 wRC+ with 20 HR in just 426 PA, Matt Holliday has the look and feel of a hitter that can offer so much more. Some of this is undoubtedly based on his reputation (he was, by wRC+, a top-10 hitter as recently as 2013, and a top-30 hitter in 2014), as well as the hope that a healthy, more rested version of the 37-year-old will be more productive. There are several indicators that Holliday will improve relative to his 2016 season, or, at the very least, stall the effects of Father Time for one more year.

Batting Average on Balls in Play

What stands out the most among a slew of career-lows for Holliday may well be his .253 BABIP. Prior to 2016, Holliday had never posted a BABIP lower than .298, and his career norm sat at .335 (the same mark that he posted in 2015). Much of this can be explained away by career-high groundball rate and a career-low line drive percentage – but how much?

Attempts at calculating an accurate predictive version of xBABIP (expected BABIP) haven’t been all that great thus far, but the folks at FanGraphs keep on trying. Progress has certainly been made, and enough so that it isn’t entirely inane to plug-and-play with the latest and greatest in their formulas. Using the methodologies outlined in those three separate posts, we find that Holliday’s xBABIP ranged anywhere between .300 and .345 … which is a testament to how rough these equations are, but I digress.

This is far from perfect analysis, to be sure, as the quirks and inconsistencies of xBABIP cannot be ignore – but it is demonstrative of the simple fact that a bit more favorable treatment from the luck dragon can change things dramatically.

As Mike pointed out when the signing was made official, Holliday hit the snot out of the ball in 2016. To wit:

[H]is hard contact rate (38.5%) was comfortably above the MLB average (31.4%) and his career average (35.6%). In fact, among the 375 players to put at least 100 balls in play this past season, Holliday had the third highest average exit velocity (94.7 mph). Only Nelson Cruz (95.9 mph) and Giancarlo Stanton (95.1 mph) were better. Miguel Cabrera (94.5 mph) was fourth. That is some good company. Also, according to Mike Petriello, Holliday put 42.5% of his balls in play at 100 mph or better, the fourth best rate in baseball. Exit velocity isn’t everything — it’s possible to hit a 100 mph pop-up, you know — but it’s not nothing either. Holliday can still strike the ball with authority.

A hard contact rate generally correlates with strong offense, with 19 of the top 30 posting a wRC+ of 120 or better in 2016, and all but one sitting above league-average. This is a normal split, going all the way back to 2010 (the first year for which we have this data). There are varying degrees of offensive prowess sprinkled throughout the list of the hardest-hitters in baseball, so it isn’t necessarily predictive of anything other than solid-average offense – but it’s a good sign nevertheless.

Statcast’s exit velocity tells a similar story. There are few bad hitters among those that hit the ball with authority, but there is little predictive value beyond that.

Or, phrased differently, the promise of having a new home ballpark.

Holliday was significantly better away from Busch Stadium last season, batting .297/.363/.554 with 11 of his home runs coming on the road. His splits were relatively steady heading into 2016, so it’s possible that this was merely a one year blip. However, it’s also possible that a park that limits power (particularly right-handed power) finally began to catch up to an aging hitter. Yankee Stadium is much friendlier to all hitters, and will greatly benefit a slugger that drives the ball to all fields, like so: 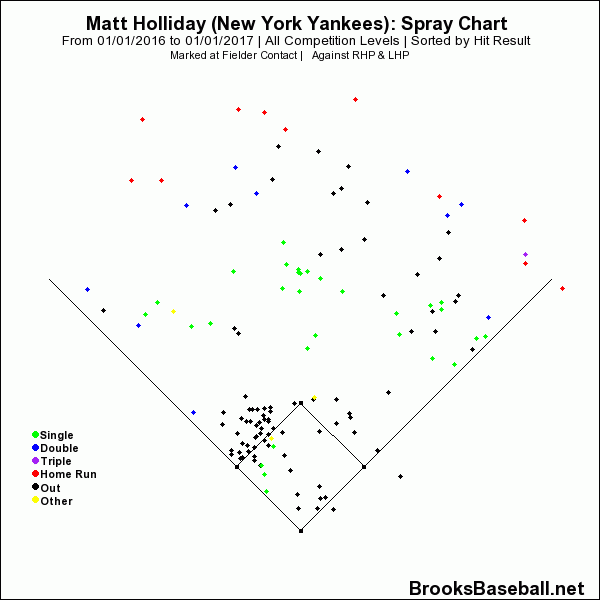 Power to all fields will play in any park, and Yankee Stadium is particularly advantageous for a hitter of Holliday’s caliber. And the fact that he still showed an all-fields approach with power in what amounted to the worst season of his career is certainly encouraging. So is the fact that all three of his Spring Training home runs have gone to the opposite field.

Rest, Rest, and Even More Rest

Holliday should not (and hopefully will not) have to play the field all that often this year, if at all. The Yankees have five players listed as outfielders on the 40-man roster, and that does not include Tyler Austin, Jorge Mateo, Rob Refsnyder, and Ronald Torreyes, all of whom could play out there in a pinch, nor does it include those outfielders that stand to open the season in Triple-A and could easily be added (Dustin Fowler, Clint Frazier, Jake Cave, etc). The depth at first base is strong, as well, albeit in a different manner, as probable back-up/platoon player Chris Carter could conceivably start for several teams.

Playing regularly at DH should help keep Holliday rested, and protect him from the nagging sort of injuries that have hampered his last two seasons. He has a bit of experience playing DH, for what it’s worth, batting .260/.340/.535 with 9 HR in 144 PA scattered across his career; such a small, spread out sample size may not mean much, but it lends a sliver of optimism that he can adjust to the routine of the position.

Two weeks ago, I discussed second-guessing the Matt Holliday signing due to the way the marketplace for designated hitters unfolded. That was never intended to be a question of Holliday’s potential, however, as I am a strong believer in his ability to have a strong season for the Yankees. The average DH had a 115 wRC+ last season, and he wasn’t all that far off in a down year. That should be well within reach for a mostly healthy Holliday, with a dash of luck.

Thoughts following the Grapefruit League off-day
Hicks, Romine and the rest of the part-timers [2017 Season Preview]