What, you didn’t think winning the pennant would be easy, did you? The Yankees and Astros are going to a Game Seven. Justin Verlander shut the Yankees down again in Game Six of the ALCS on Friday night, then Houston’s offense tacked on a bunch of insurance runs late to put the game out of reach. The final score: 7-1. And we will see you tomorrow night.

Still No Answer For Verlander
Five days ago Verlander manhandled the Yankees for nine innings, striking out 13 in his 124-pitch masterpiece. He wasn’t quite as good in Game Six, though he was obviously excellent, and the Yankees failed to capitalize on the few chances they had. That includes putting a man on base in each of the first three innings.

The sixth and seventh inning … that’s when the Yankees really had a chance to get back into the game. The Astros took a 3-0 lead into that sixth inning — more to come on that in a minute — and, for the first time basically ever, Verlander appeared to be tiring. Chase Headley started the sixth with a single, then Didi Gregorius reached with a two-out single to bring the tying run to the plate.

The batter: Gary Sanchez. The count: 3-0: The result: a weak little check swing tapper for the inning-ending ground out. Yuck. I was totally cool with giving Sanchez the green light. There were two outs in the inning and Verlander had roughed up Greg Bird pretty good in the series up to that point. Sanchez is very capable of tying the game with one swing. Then Verlander threw him a 3-0 breaking ball and Gary had no idea what to do with it. He was frozen in his tracks expecting a heater. It was ugly.

In the seventh, Verlander gifted the Yankees two free leadoff baserunners. Bird drew a walk and Starlin Castro was hit by a pitch — how the home plate umpire missed it, I have no idea, the Yankees had to ask for a review — which set the Yankees up. Verlander was clearly running on fumes. It was made even more clear when he fell behind in the count 3-0 on Aaron Hicks. Hicks took the 3-0 pitch for a strike (duh), then got jobbed on the 3-1 pitch. Look at this: 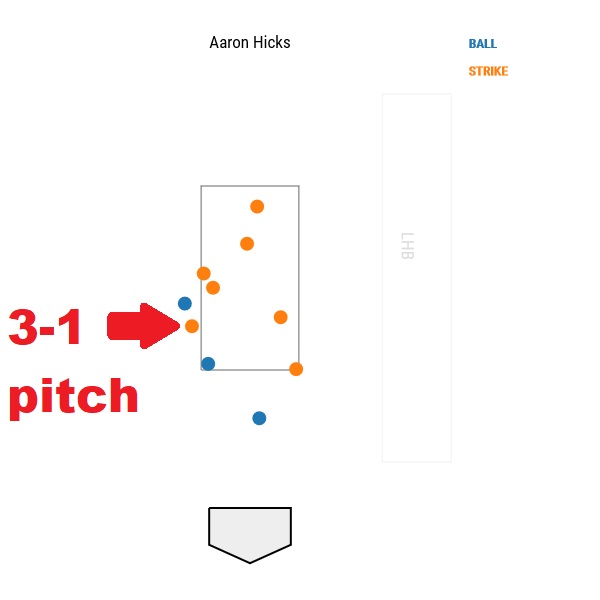 Dude. That call completely changed the game. I don’t think that’s an exaggeration. That doesn’t necessarily mean the Yankees go on to win the game, but it changes everything. That should have been ball four to load the bases with no outs. Instead, it was called a strike to run the count full. Hicks battled for ten pitches before striking out on a wicked breaking ball. That orange dot in the lower right corner of the strike zone? That was the finish pitch. How the hell are you supposed to hit — or even foul off — a breaking ball down-and-in like that.

Hicks struck out, but the rally was not dead. Todd Frazier came up next and absolutely clobbered a fastball to center field. Off the bat, I thought it was gone. I though the game was tied. Frazier hit it to the wrong part of the park through, literally the deepest part in left-center, and George Springer made a fantastic leaping catch at the wall to take away extra bases. If Frazier gets the bat to the ball a nanosecond sooner, he pulls it a bit and it’s over the wall. Baseball can be a real jerk sometimes. Headley followed with a ground out to end the threat.

The first out of the inning came after Hicks should’ve walked on the 3-1 count. The second out came on the Yankees’ hardest hit ball of the night. Sometimes you get the breaks, sometimes you don’t. Aaron Judge did hit a very long solo home run in the eighth to get the Yankees to within 3-1, then they made Ken Giles work in the ninth with a 7-1 lead, and that’s about it for the offense. Those sixth and seventh innings, man. That was the game right there.

Severino Hits A Wall
For the first four innings of Game Six, Luis Severino traded zeroes with Verlander and looked good and strong. He was getting the anxious Astros to chase fastballs — and sliders, at that — up the zone. Severino looked real good. Then he hit a wall in the fifth inning, and things came crashing down. The inning started with walks to the No. 6 and 8 hitters and continued when Severino couldn’t put Brian McCann away in an 0-2 count.

McCann, who was 0-for-postseason up to that point, worked the count back 2-2, then pounced on an outside fastball that was a little too up in the zone for a ground-rule double to right field. The Yankees got lucky, or so it seemed. The ball hopping over the wall forced Evan Gattis to stop at third. Severino then issued his third walk of the inning to load the bases with one out. He was missing his spots by a mile and simply seemed to run out of gas.

I thought Severino should’ve been out of the game at that point. Joe Girardi opted to leave him in to face Josh Reddick, who has been terrible all series, and sure enough he popped out for the second out. Severino had a chance to escape the jam with only one run allowed. Then he hung the hell out of a first pitch slider to Altuve. Look where Sanchez set up and where the pitch ended up: 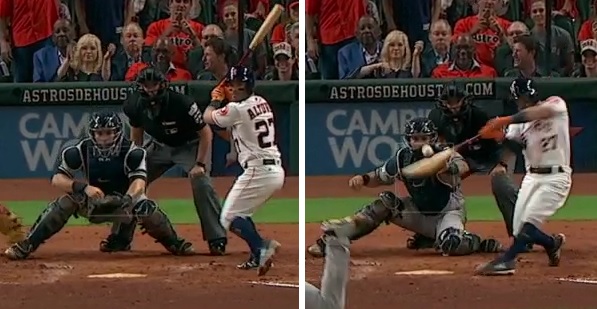 Oy vey. That was a hanger and a half. It was also the final pitch Severino threw. By time Chad Green came in, it was too little, too late. Altuve’s two-run single gave the Astros a 3-0 lead. Like I said, I thought Severino should’ve been out after walking Springer. I definitely didn’t want him facing Altuve for the third time with his control vanishing. That was asking for trouble, and the Yankees got it. Severino’s final line: 4.2 IP, 3 H, 3 R, 3 ER, 4 BB, 3 K. Good to bad in a heartbeat.

Battered Bullpen
Green gave the offense a chance to get back in the game. He hucked 2.1 scoreless innings and threw 38 pitches, and that is a-okay with me. Down three runs against Houston’s bullpen is still a winnable game as far as I’m concerned. Green never pitches back-to-back days anyway, so once he’s in the game, might as well max him out. Girardi did that and Judge’s solo homer got the Yankees to within 3-1 in the eighth. Progress!

The wheels came off in the bottom of the eighth. David Robertson entered and again, I thought it was the right move. Hold them right there because two runs is hardly insurmountable. Homer, double, single, double. Ouch. Robertson faced four batters and retired zero. The Altuve solo homer came on a pitch down on the zone, one of those “how the hell did he hit that?” pitches. Everything else was pretty poorly located. Robertson looks worn down, which tends to happen when you throw eleven high-stress innings in eleven postseason games.

Dellin Betances mopped up the rest of the eighth and allowed a sac fly to give the Astros a 7-1 lead. I guess the good news is Betances looked serviceable? Not serviceable enough that I’d trust him with a small lead in Game Seven, but perhaps serviceable enough to keep him on the World Series roster should the Yankees advance. Anyway, four batters faces for Robertson, four hits allowed, four runs allowed. That’ll put a dent in the postseason ERA.

Leftovers
The Yankees had seven hits even though it doesn’t really feel like it. Headley had two — he’s now 7-for-11 in the last four games — while Brett Gardner, Judge, Gregorius, Sanchez, and Castro had one each. Bird and Hicks drew walks. Everyone in the starting lineup reached base at least once except Frazier, who had the team’s hardest hit ball of the night. Well, second hardest after the Judge homer. The Yankees went 1-for-15 with men on base. There’s yer ballgame.

That’s about it, right? Not much else to cover in this one. Shake it off and go get ’em in Game Seven.

Box Score, WPA Graph & Standings
ESPN has the box score and MLB.com has the video highlights. We have a Bullpen Workload page. Here’s the loss probability graph:

Up Next
With the loss, the Yankees will once again play a win or go home game this postseason. They’re 4-0 in those already this year. The Yankees and Astros will get together for Game Seven of the ALCS on Saturday night. CC Sabathia and Charlie Morton are the scheduled starters.

2017 ALCS Game Six: Yankees at Astros
Thoughts prior to Game Seven of the 2017 ALCS