Building An Early Lead
As good as they’ve been this month, the Yankees have been playing from behind a bit too much lately, and thankfully they jumped out to an early lead Monday night. Gary Sanchez opened the second inning with a bloop single to center — Delino DeShields Jr. nearly caught it on a dive — and Neil Walker brought him home with a well-place bloop double along the left field line. Walker continues to be in the middle of everything.

The Walker double gave the Yankees a 1-0 lead. Two pitches later, Gleyber Torres rocked a long two-run homer to left for a 3-0 lead nine batters into the game. Bartolo Colon left an 86 mph two-seamer out over the plate and Torres pounded a no-doubter out to left field. I love this kid. That was Gleyber’s fifth homer in his last 13 games. Remember how there were questions about his power coming into the season? Yeah, I think he’s answering them.

The Rangers got a run back in the bottom of the second on Joey Gallo’s solo homer, but Walker answered back a solo homer in the fourth, his first dinger of the season. Kole Calhoun took a homer away from Walker in Anaheim a few weeks ago, so I guess it’s technically the second ball he’s hit over the fence this year. Either way, the solo blast gave the Yankees a 4-1 lead after three and a half innings. Hooray for having an early multi-run lead!

Bad Tanaka
Three pretty bad starts in a row for Masahiro Tanaka. He allowed four runs in 5.1 innings (two homers) against the Red Sox two starts ago, then three runs in five innings (one homer) against the Nationals last time out. On Monday night, Tanaka gave up four runs in five innings to one the worst offensive teams in the league. The Rangers went into this game averaging 4.02 runs per game, better than only the White Sox (3.86) and Royals (3.96) among AL squads.

Tanaka allowed the #obligatoryhomer to Gallo in the second inning on a splitter that didn’t split. Solo homer to a guy who hits a lot of homers? Meh. It happens. The #bonusdinger in fourth inning was the larger problem. Tanaka walked Nomar Mazara on four pitches and Gallo on eight pitches after getting ahead in the count 1-2. Not being able to put Gallo away told the story of the night. Look at Tanaka’s splitter locations: 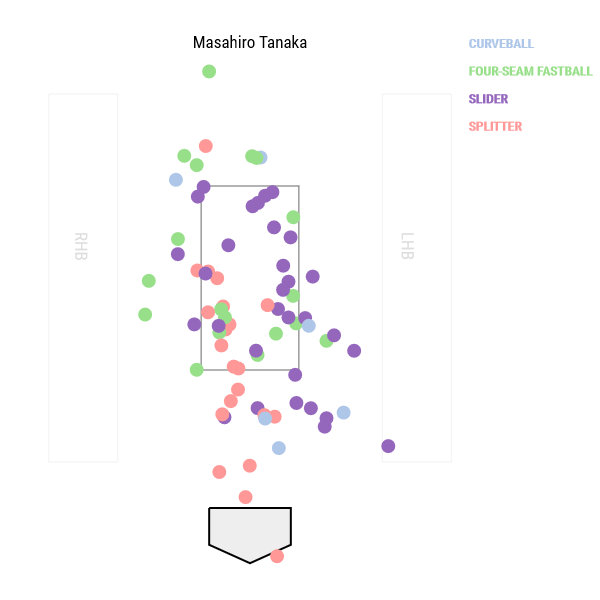 Too many splitters were so far down below the zone they were easy takes. Tanaka wants the split to start in the lower third of the zone so the hitter reads fastball, then, once he starts his swing, it dives out of the zone. The split was starting down below the zone, and those are easy takes. Gallo spit on a bunch of two-strike splitters to take the walk. Then Tanaka left a splitter up to Rougned Odor, the next batter, and he hammered it to right for a game-tying three-run homer. Bah.

Tanaka’s final line: 5 IP, 3 H, 4 R, 4 ER, 4 BB, 3 K, 2 HR on 76 pitches. I thought Aaron Boone would send him out for another inning, especially after the Yankees scored three in the top of the sixth, but nope. I’ve made peace with the dingers. Tanaka’s going to give ’em up. I can’t do anything about it. Four walks though? To that offense? That’s annoying. Tanaka went into this game with ten walks and a 4.8% walk rate on the year. I miss good Tanaka. Please come back.

Retake The Lead
Tanaka gave up the stinky Odor homer to tie the game 4-4 in the fourth, and it took the Yankees three pitches to retake the lead. Aaron Judge snapped an 0-for-17 slump with a solo homer to dead center field to lead off the top of the fifth. The Yankees added three more runs in the sixth inning as well. The first of those three came on another Torres homer, this one a solo shot to center. To the video:

You know, I’m pretty sure Colon threw at Torres in the fourth inning. Gleyber took him deep in the second and Walker took him deep in the fourth, and as the next batter following the Walker homer, Torres saw a way inside fastball and was later plunked in the behind. Hmmm. If it was intentional, Gleyber got the very best revenge and took Bart deep again. First career two-homer game for the kid.

A Brett Gardner walk, a Judge double, and a Giancarlo Stanton sacrifice fly plated another run in that sixth. Didi Gregorius, who had been 1-for-48 going into this at-bat, came through with a two-out double to left-center to drive home the third run of the inning. Boy oh boy did Didi need that. He ripped a line drive back up the middle that was caught by DeShields in center for an out in the first inning. You could see the frustration on the face. The double gave the Yankees an 8-4 lead.

Hand It Over To The Bullpen
Chad Green had been up warming before the Yankees scored those three insurance runs in the top of the sixth, so he came in for the sixth and seventh, and hot damn, he gave up some very loud outs. Loud and long. Green’s spray chart for his two-inning appearance: 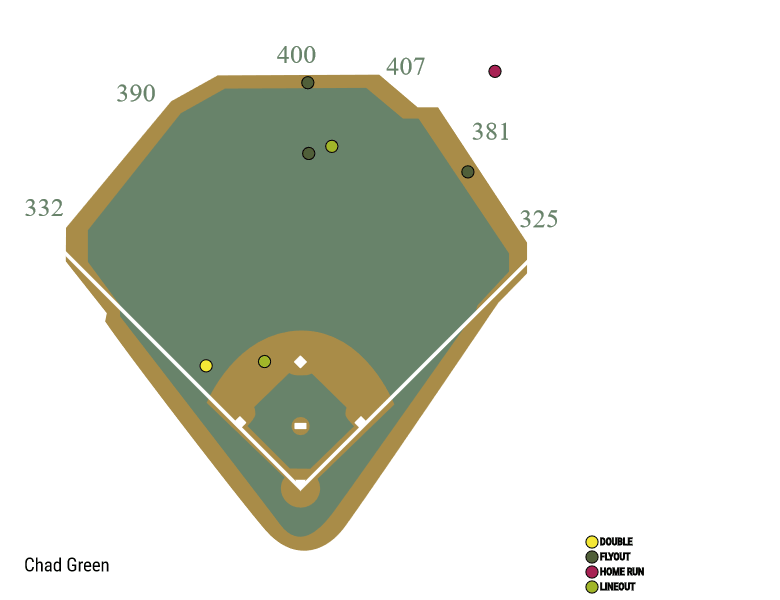 Ronald Guzman hit a solo homer and Shin-Soo Choo and Robinson Chirinos hammered balls to the warning track for outs. The dark green dot in the middle of center field? Jurickson Profar hit that line drive 107.4 mph. Like I said, Green was giving up some very loud outs. I guess this was a good game to get that out of his system. The Guzman homer cut New York’s lead to 8-5.

David Robertson, who has been something less than automatic his last few appearances, started the eighth inning with a leadoff walk, which is always annoying. Thankfully he retired the next three batters to escape the inning. Aaron Hicks swatted a two-run insurance homer and Jonathan Holder closed the door in the ninth. He again threw no curveballs. Hmm. Aroldis Chapman had been warming up for the save chance. He sat down after the Hicksie homer.

And finally, Gleyber’s multi-homer game was the first of his career and already the 12th multi-homer by a Yankee this season. It’s May 21st. The all-time record is 24 multi-homer player-games by the 1961 Yankees and 1966 Braves. Also, at 21 years and 159 days, Torres is the second youngest Yankee with a multi-homer game. Mickey Mantle did it at 20 years and 296 days. Pretty awesome.

Box Score, WPA Graph & Standings
ESPN has the box score and updated standings while MLB has the video highlights. Here is handy dandy our Bullpen Workload page and here’s the win probability graph:

Up Next
Same two teams Tuesday night, in the middle game of this three game series. That’s another 8:05pm ET start. Domingo German and Cole Hamels are the scheduled starting pitchers.

DotF: Kahnle begins rehab assignment in Charleston's loss
Greg Bird is close to returning, and the Yankees could really use his left-handed power