With the injuries mounting, Team USA has considered the unthinkable (at least for Bud Selig): They could forfeit the tournament if they continue to lose players. On Sunday, the team’s backup catcher had to play left field, and we’ve seen a steady stream of players exit with various aches and pains. While I certainly appreciate the international drive behind this tournament and the compelling games and storylines, news of a forfeit lends the WBC an aura of mismanagement. It seems like a hastily assembled event with no effort to court or accommodate the star players that would lend it legitimacy. I can see why the Yanks don’t want their players participating, and if other teams follow suit, those behind the tourney will have to assess their 2012 aims.

We interrupt the dog days of spring training to bring an installment of “What’s New in the World Baseball Classic?”

As we know, sometime on Monday — or Tuesday or Wednesday if the Yanks keep pushing this back by a day — Damaso Marte (throwing shoulder) and Robinson Cano (throwing shoulder) will head into the MRI tube for some post-WBC scans of sore muscles. While the Yanks wouldn’t really miss Marte if he were to go down, losing Cano after losing his fellow Dominican teammate Alex Rodriguez would be a huge blow. Cano, however, played on Sunday and probably isn’t hurt that badly.

Meanwhile, across baseball, other players are feeling it from the Classic. The Marlins’ Alfredo Amezaga, the Braves’ Chipper Jones and the Red Sox’s Dustin Pedroia are among the players who are out of the Classic after hurting themselves during the early rounds. For those wary of the pre-season tournament, these aches and pains are simply fuel for the anti-Classic fire.

In a way, of course, that’s a patently silly side to take. After all, Dustin Pedroia could hurt his ab during a game in Fort Myers just as easily as he could strain it playing for Team USA. While the USA team shows a little less than complete enthusiasm for the tournament, though, I see players on most of these other teams giving their all for their countries. The Dominicans, victims of an upstart and now-eliminated Netherlands team, particularly left it all on the field. At this point early in spring training, the players’ bodies just aren’t prepared for the proverbial 110 percent effort.

But that’s baseball life under Bud the Internationalist. As long as we don’t worry too much about it, the Classic makes for good baseball. The other 162 games, though, are the ones that count.

Meanwhile, in other Classic news, international tournaments make strange bedfellows. Last week, the Boston Herald reported that Derek Jeter, Dustin Pedroia and Kevin Youkilis are all new best friends following their time on the same team. Jason at IIATMS noted the nausea-inducing backslaps Jeter doled out to his two arch-rivals.

It is, of course, no secret that the fans of the Red Sox and Yankees take this rivalry far more serious than anyone on both teams not named Jason Varitek. It’s still jarring to hear Jeter speak about two key players on the team most likely to battle the Yanks for the top spots in the American League East this summer. Other bloggers aren’t so sure about the purity of these words.

Digging a little deeper into Derek’s recent statements, Jay at Fack Youk wonders if they are implied digs at Alex Rodriguez and other Yankee teammates. Jay notes a recent quote by Jeter about Team USA third baseman David Wright:

The thing with him, I respect the way he handles himself in New York. I think he shows all the right leadership skills – he leads by example and he’s not phony. What you see is what you get from him. It’s not an image he’s trying to portray; I think that’s how he is as a person.

While none of the A-Rod Outrage Clan known as the New York sports media has picked up on it, Jay sees the not-so-subtle digs in A-Rod in this quote. When A-Rod complimented Jose Reyes, it was a national emergency. When Jeter compliments A-Rod’s Mets counterpart in a way far more critical of A-Rod than Alex was of Derek, Jeter is greeted with dead silence.

And that’s life in New York with the World Baseball Classic. 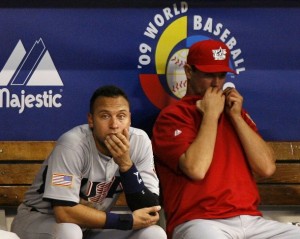 Team USA has their backs against the proverbial walls in the WBC tonight, facing elimination after being mercy ruled by Puerto Rico last night. Their opponent: those gutty, gritty, pesky, playing the game the right way Netherlandians. I’m sure you remember that this is the same Netherlands team that send the Dominican Republic home with their tail between their piernas.

Roy Oswalt gets the ball in the elimination game, and of the four starters on the team, he’s the one I feel most comfortable with in a win or go home situation. Team mascot Dustin Pedroia is officially out of the tournament with an oblique strain and has been replaced by the Orioles’ Brian Roberts. It looks like the Netherlands is sending Marlins’ farmhand Rick VandenHurk to mound since staff ace Sidney Ponson (hah) threw yesterday. VandenHurk was the World Team’s starter in the 2007 Futures Game, and has a 6.96 ERA in 95.2 big league innings.

ESPN2 is carrying the game; first pitch is scheduled for 7:30. Chat about that, or anything else on your mind here. Oh, I also want to mention that Chase Utley is making his spring debut tonight, less than four months after having the same surgery to repair a torn hip labrum that A-Rod will eventually have. I guess that’s a good sign. Anyway, enjoy the game.

Update (7:49pm): If you’re bored on this somewhat lame feeling Sunday night, Brian Foley at The College Baseball Blog is going to be chatting at 9pm. Head over and ask him how awesome Steven Strasburg is or how long he thinks it’ll be until Gerrit Cole blows out his labrum (12 K in 5 IP last night). I keed, I keed.

Fresh off a dramatic and historic loss to the Netherlands in the WBC, Robbie Cano and Damaso Marte returned to the Yanks today nursing some minor injuries, says Pete Caldera. Marte has pain in his left pectoral, believed to be the result of weighlifting, while Cano’s right shoulder is barking. It’s possible Cano’s injury is a result of the workload and intensity of the WBC games. Both players are going to get checked out by the Yanks’ medical staff today, and won’t see action this weekend as previously thought. The injuries sound minor, so hopefully they won’t be out very long.

Following up on our morning report concerning potential legal trouble for Bernie Williams, we have a statement from the high-powered entertainment publicity firm Rogers & Cowan.

John Reilly, the V.P. of their music department, writes in with a denial:

Yesterday evening we learned of the filing of a complaint against Mr. Bernie Williams. The news has taken us all by surprise. On the night in question, Mr. Williams had gone out after accepting an invitation to be a guest performer with a local music act. Mr. Williams denies any wrongdoing and we feel that some published media reports today are inaccurate. At this time, Mr. Williams has been advised by his legal counsel, José M. Marxuach, to not make any further comments, inasmuch as we do not want to interfere with the ongoing investigation. We want to assure everyone that Mr. Williams will fully cooperate with the local authorities to have this matter clarified as soon as possible.

Bernie and the Puerto Rican WBC team is scheduled to take on Team USA on Saturday night. There’s no word yet on Bernie’s status for the game, but we’ll track this story as it develops.

As swan songs go, Bernie Williams’ efforts in the WBC haven’t been what he wanted. While he was internationally walked a few days ago, his play in the field and on the base paths nearly cost Puerto Rico a key game against the upstart Netherlands team. Now, a woman in Puerto Rico has filed a complaint against Williams, alleging that the former Yankee hit her and took her camera while at a nightclub early Thursday morning. Police are investigating, and I hope they find evidence to clear Bernie. He was always one of my favorites, and I’d hate to see him go out like this.

In 2006, Japan stunned the international baseball community when they claimed the WBC title. They’re back with a vengeance to defend their crown, and while many players — the pitchers especially — view this tournament as a potential audition for the U.S. Major Leagues, the Land of the Rising Sun is mostly concerned with capture another title. While the rehabbing Hideki Matsui won’t play in the tournament, he is wanted for it. His fellow Japanese Yankee isn’t so lucky. When asked about Kei Igawa’s omission from the team, one of the Japanese reporters assigned to the team said “They think he is not so good.” I don’t think Brian Cashman is going to voice much objection to those sentiments. (Hat tip to PeteAbe for this amusing anecdote.)