Win it for Joba and Jerry Girardi. 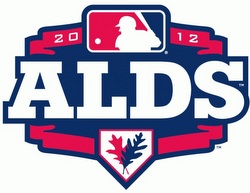 The buzz of last night’s Game Three win is still in the air, and now the Yankees have a chance to clinch a trip to their third ALCS in the last four seasons with a win tonight. The pitching has been stellar so far and Phil Hughes will look to continue that trend in Game Four, but there is a well-rested bullpen behind him if necessary.

Unfortunately, the Yankees family lost a member recently as Joe Girardi’s father Jerry passed away following a long fight with Alzheimer’s disease. He was 81. Joe will remain with the team and manage tonight’s game though, which is something I’m sure his father would have wanted him to do. Let’s win it for Jerry Girardi fellas. Here are the lineups…

The weather in New York is gorgeous but a little chilly, so perfect playoff weather. First pitch is scheduled for 7:37pm ET and the game can be seen on TBS. Enjoy.

The Orioles started left-hander Joe Saunders in an elimination game last Friday, and they’ll do the same tonight in Game Four of the ALDS. The 31-year-old southpaw was acquired from the Diamondbacks in late-August, and he went on to allow just one run in 5.2 innings against the Rangers in the AL wildcard play-in game last week. As bad as Texas had been swinging the bats, that was an unexpected;y strong performance.

The Yankees have seen plenty of Saunders over the years thanks to his time with the Angels, and in fact he made two playoff starts against the Bombers in the 2009 ALCS. He held them to two runs in seven innings in Game Two before getting hammered for three runs in 3.1 innings in the decisive Game Six. Saunders walked five and struck out zero in that game. He’s been in the NL the last few years though, so recent experience against the Yankees is limited.

Saunders’ second start following the trade to Baltimore came against the Yankees in Camden Yards, and he pitched admirably despite allowing a run in the first (Alex Rodriguez sacrifice fly) and a run in the second (Ichiro Suzuki double). Saunders retired ten straight after the double and 12 of the final 15 hitters he faced overall. That was the Jerry Meals game, when the first base umpire called Mark Teixeira out to end the game even though he obviously beat the throw on what would have been the game-tying fielder’s choice. 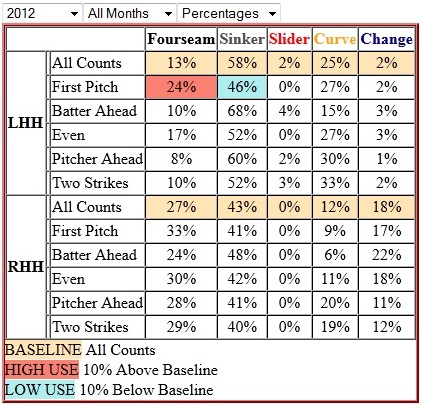 Saunders is a ground ball guy who won’t miss many bats, so it’s not a surprise that he throws a ton of upper-80s sinkers. His comfort zone is down-and-away to righties, as he’ll pound that corner of the zone with fastballs, low-80s changeups, and upper-70s curveballs. I’m not kidding, he’ll live down there all game and rarely come inside to batters of the opposite hand. Lefties get just the sinker and curveball and Saunders absolutely dominates his fellow left-handers. He’ll bust them inside with the fastball and go out of the zone with the curve for swings and misses.

Like I said, he dominates left-handers. In fact, Saunders has the biggest wOBA split among qualified starters this season, turning all righties into Nick Swisher and all lefties into Marlon Byrd. Seriously, those strikeout, walk, and ground ball numbers against lefties are top notch.

So, obviously, the Yankees have to stack their lineup with righties tonight. As bad as he’s been swinging the bat, Alex Rodriguez should start and hit right in the middle of the order. He hit lefties far better than righties this year (151 vs. 94 wRC+), and Saunders is exactly the type of pitcher he needs to face right now — a finesse left-hander who won’t come inside. If A-Rod is going to have some impact this series, Saunders is the guy you would expect him to do it against.

Derek Jeter’s new bone bruise might relegate him to DH, which I assume means Jayson Nix at shortstop. Joe Girardi will also have the option of playing Nix in left and Eduardo Nunez at short for a few innings, at least while Saunders is in the game. He could lift Nunez for defense and a pinch-hitter (Raul Ibanez?) as soon as a right-handed reliever is called upon. The Yankees didn’t do very much against Wei-Yin Chen in Game Two, but he went after them with low-to-mid-90s fastballs on both sides of the plate. Saunders won’t do that.

There was more to last night’s Game Three win than just a win. Joe Girardi’s decision to lift Alex Rodriguez for a pinch-hitter in the ninth inning of a one-run game was almost like a turning of the page in A-Rod’s career, one of the greatest playing careers the game will ever see. Forget about Raul Ibanez and what happened afterwards, it was an acknowledgement on the part of the Yankees that in that situation, they were better off with Alex on the bench. This isn’t some role player on a one-year deal who will be gone after the season, like it or not A-Rod is here to stay for a very long time.

The move was absolutely 100% justifiable, there’s zero doubt about that. Rodriguez has been struggling not just in this series but for the last few weeks overall after he came back from the broken bone in his left hand, and he looks especially feeble against right-handed pitchers. When Joe Torre dropped A-Rod to eighth in the lineup in the 2006 ALDS, I thought then (and still do now) that it was out of spite more than anything. The relationship between those two always seemed strained, but I’ve never gotten that vibe with Girardi. That’s why the pinch-hitting move took some major guts on the manager’s part.

“Of course you do (think about the magnitude of lifting A-Rod),” said Girardi after the game. “And you know you’re going to be asked a lot of questions if it doesn’t work … I mean, it’s a tough move. Sometimes you’ve got to do what your gut tells you, and my gut told me to make the move. I still have the utmost respect for Al, and I still think he’s a great player. He’s just going through a little tough time right now.

“I just went to (A-Rod) and I said, ‘You’re scuffling a little bit right now … We have got a low-ball hitter (against sinker-baller Jim Johnson), and we’ve got a shorter porch in right field, then left field obviously. Raul has been a good pinch hitter for us, and I’m just going to take a shot.’”

Rodriguez, as you’d expect, faced a swarm of reporters after the game and was drilled pretty hard about being lifted for a pinch-hitter in the late innings of a close playoff game. He joked that it was the first time he was pinch-hit for in a meaningful situation since “maybe high school,” but otherwise defended Girardi and his decision, preaching team over individual. Here’s the video of his post-game media scrum…

I thought he looked very sincere there and don’t think this was a case of a guy putting on an act like he did with Torre back in 2006. A-Rod really seemed to change back in 2009 after his hip surgery and PED revelations, as he shifted from a “this is what I did and need to do” angle to a “we’re a team and this what we did and need to do” approach. Everything has been about the Yankees and not Alex since then. “We preach about team, team, team,” he said. “That’s all we care about.”

Who knows what this means going forward for A-Rod both this postseason and for the final five years of his contract. Maybe he moves down in the lineup or sits against righties, who knows. Being lifted for a pinch-hitter last night was a bit of a statement though, and I don’t mean a harsh one like a message was being sent or anything. It was the beginning of an era with a de-emphasized Rodriguez, and era that may be slow to develop but has begun nonetheless.