River Ave. Blues » What are the Yankees going to do with the first pick of the Rule 5 Draft?
Yanks, D-Backs, Tigers talking blockbuster
Yanks have their hands full at Winter Meetings 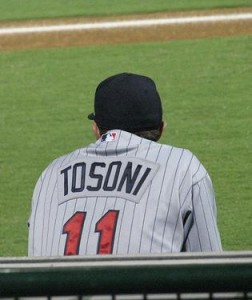 Talk about topics I didn’t think I’d be writing about when I woke up yesterday morning. When the Yankees traded enigmatic reliever Brian Bruney to the Nationals, they received one of those generic players to be named later, and no one thought much of it. Bruney was gone, meaning the Yanks saved some cash and I would need a new reliever to despise (early favorite: Phil Coke). Not long after the trade, I mused that maybe the return would be the rights to the first pick of Thursday’s Rule 5 Draft, and whaddya know? That’s exactly what they’re getting.

Trades involving Rule 5 picks aren’t uncommon. The Reds worked out a deal with the Cubs to get Josh Hamilton in 2007 because they were afraid the Marlins would take him before they got a chance to pick. The Cubs took Hamilton with the third pick, then immediately send him to Cincinnati for $100,000.  The same basic thing is happening with the Yanks and Nats this year, except the player the Nats take will be sent to the Yanks as the PTBNL. And yes, the Yanks will tell the Nats who to pick, otherwise this deal wouldn’t make sense.

As per the Rule 5 Draft rules, the Yanks will have to keep the player on their 25-man Major League roster all season in order to retain his rights permanently. If they don’t, then the player has to pass through waivers (if a team claims him, the Rule 5 rules follow him) before being offered back to his original team. I thought it was a very shrewd move by the Yanks, because now they get to choose their return for Bruney from a massive pool of players, rather than being limited to one organization and the players they’re willing to move.

Through the magic of common sense, we know that players from 28 teams are possible picks. A team can’t pick a player from it’s own system, so that rules out everyone in the Nats’ system, and the Yanks aren’t going to have the Nats take one of their own (New York’s) prospects. It’s possible to unearth a gem in the Rule 5 Draft (Dan Uggla, Shane Victorino, and Johan Santana are R5D alumni), thought it’s extremely unlikely. The latest CBA took all the fun out of the Rule 5, because it gave teams another year before they had to protect players.

So, realistically speaking, the Yanks don’t have many places to hide a Rule 5 player. There’s always the back of the bullpen and the bench, and given their current situation, leftfield. I’m going to rule out an infielder because the Yanks felt compelled to add the likes of Eduardo Nunez and Reegie Corona to the 40-man last month. Let’s run down some possibilities after the jump, listed alphabetically.

Tommy Mendoza, RHP, Angels
The Halos’ fifth round pick in 2005 was ranked as the system’s 10th best prospect in both 2006 and 2007 by Baseball America before injuries and 50-game banned substance suspension (amphetamines) dropped his stock in 2007 and 2008. He rebounded in a big way in 2009, making 24 starts between Double- and Triple-A while posting a 3.89 FIP. With a three high-80’s/low-90’s fastballs (four-seamer, two-seamer, cutter), an average curve, a show-me change, and good command, Mendoza projects as a back of the rotation arm that’s ready to step into the big leagues.

Yohan Pino, RHP, Indians
A former Twin, Pino was shipped to Cleveland this summer as the PTBNL in the Carl Pavano trade after spinning his wheels in Double-A for parts of three seasons. He finally took a step forward in 2009, posting a 2.89 FIP in 14 starts and 26 relief appearances between the two highest levels of the minors. At his best, Pino is a five pitch pitcher with excellent control (125 BB in 512.2 IP) of a low-90’s heater and four breaking pitches. He throws two curveballs and two sliders; a slower, sweepy version and a hard-biting version of each. Like Mendoza, he’s a back-end arm that can start and relieve on the cheap.

Aneury Rodriguez, RHP, Rays
Probably the best pure talent featured in this post, Rodriguez was the player the Rays received from Colorado in exchange for Jason Hammel back in Spring Training. He had a bit of a disappointing year in Double-A this season, posting a 4.44 FIP in 27 starts, however Rodriguez has proven himself durable by never missing a start in his five year career. With a big, projectable body (6′-3″, 180 lbs), a lively low-90’s heater, as well as a solid curve and developing changeup, Rodriguez will be a hot target because he’ll be able to soak up innings on the cheap.

Chad Tracy, C/1B/LF, Rangers
It seems like an eternity ago, but I actually lobbied for the Yanks to draft Tracy way back in 2006. No relation to the big leaguer of the same name (although he is the son of Rockies’ manager Jim Tracy), Tracy’s developed into a versatile power bat that should a useful bench player in the Majors. A career .273-.339-.458 hitter, he took off after giving up catching in 2009, putting up a .279-.333-.488 batting line with 32 doubles and 24 homers in 594 Double-A plate appearances. Even though he’s better suited for the NL, Tracy could be the righty half of a platoon with Juan Miranda should the Yanks choose to go that route.

Rene Tosoni, OF, Twins
One of the bigger breakout prospects of the year, Tosoni was a victim of the numbers game and left exposed to the Rule 5 Draft by the Twins. Not only did Tosoni participate in the Futures Game this year, he was named MVP thanks to his pinch-hit, go-ahead double off Trevor Reckling (Angels) in the 7th (final) inning. His greatest skill is his ability to work deep counts and grind out at-bats (.383 career OBP), and he added some power to his game last year (.184 IsoP) at Double-A. The New Stadium should boost the lefty hitter’s power even more. Tosoni is also a smart and speedy baserunner that can handle all three outfield spots, and he’s even got an above average arm to boot. He projects as an everyday player, which makes him a Rule 5 Draft gold mine.

Obviously, the Yankees can pick from a pool of literally hundreds of players, but these are just five four to keep an eye on. If nothing else, all five will be selected early in the draft. Brian Cashman & Co. could also opt to go for an older player, perhaps one who’s been in the big leagues before but stalled out, similar to what they did with Josh Phelps in 2007.

I teased it earlier, but I think Tosoni’s the guy. The Yankees don’t have much outfield depth (majors or minors), and there’s no harm in bringing in some competition for the younger guys. Tosoni’s a potential 15-15 outfielder that can get on base 35% of the time and play a solid outfield. There’s a ton of value in that, especially with three pre-arbitration years ahead of him.

Brian Bruney was an expendable bullpen piece, one that was probably going to be non-tendered or buried in low-leverage spots, and the Yankees turned that into some payroll savings and a potential cost effective player. It was a very smart and creative move by a team that can succeed with brute force, and even if the player they select doesn’t stick, the process is correct. You know how teams will make a pool of say, five prospects available in a trade? Just think of this as a pool of 500 or so prospects being available to the Yankees. How can you not like that?