Postseason baseball, I’ve missed you so much. The Yankees clinched a wildcard spot with Thursday’s 4-1 win over the Red Sox. The job ain’t done though. This was step one. The hard part starts now.

Two Runs Equal One Good Start
Former Yankee Rich Hill came into this game with some unbelievable numbers in his brief return to a big league rotation. He’d made three starts with the Red Sox coming into Thursday, allowing three runs on ten hits and two walks in 23 innings. He struck out 30. That’s pretty nuts. The Yankees have struggled mightily against left-handers of late, and with Hill throwing like that, it was easy to think runs would be at a premium.

Runs were at a premium, but the Yankees were able to strike first, scoring two in the second inning. The first came on a Carlos Beltran solo home run — his fifth homer against a lefty this season — to the opposite field. Beltran really reached out and drove this pitch to right: 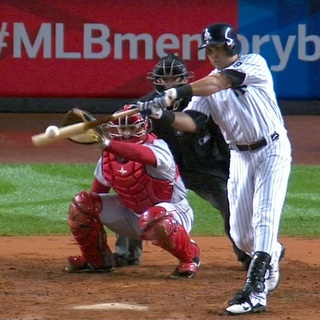 That’s nothing but raw strength right there. You can’t reach a pitch that far up and away and drive it out of the ballpark without some brute strength. Was it a cheap Yankee Stadium homer? Oh sure. But it was still an impressive blast. You don’t see too many pitches like that get driven out of the ballpark.

Beltran’s homer was the first run of the inning. Following the leadoff homer, John Ryan Murphy worked a one-out walk and Didi Gregorius worked a two-out walk to put runners at first and second. Brendan Ryan, who missed a meatball of a 2-0 fastball, managed to slap a single through the left side of the infield later in the at-bat to score Murphy, who slid in ahead of the throw.

I didn’t think Murphy had a chance to score when the ball left the bat, especially since Jackie Bradley Jr. was going to make the throw, but it appeared the wet grass slowed the ground ball down. It took Bradley that much longer to get the ball and gave Murphy a little more time to score. He slid in safely and boom, a 2-0 lead in the second. They needed that. I needed that.

Big Game For The Big Man
After everything that happened the last two years and his poor first four months this season, I couldn’t be any happier CC Sabathia got the win in the postseason clinching game. He’s pitched and won a lot of big games for the Yankees over the years — he tossed a complete game for their last postseason win remember, Game Five of the 2012 ALDS — and this game was Sabathia turning back a clock, putting the team on his back and carrying them to a win.

The pitching line isn’t anything special — 5 IP, 6 H, 1 R, 1 ER, 3 BB, 3 K — but throw that out the window. Sabathia made some big pitches, his defense turned some huge double plays, and he handed the bullpen a lead. This was straight up gutty effort by the big man. No other way to describe it. Sabathia had to grind, he made pitches when he had to — getting Travis Shaw to fly out to strand the bases loaded in the fifth stands out — and helped the Yankees to a win. Bravo, CC. You’re still a BAMF.

Close Your Eyes, The Bullpen’s Coming
After using the big relievers for extended outings Wednesday night, seeing Sabathia’s pitch count sitting near 80 after four innings was, uh, worrisome. How in the world were they going to navigate the next few innings? Adam friggin’ Warren, that’s how. Warren, Friday’s scheduled starter, warmed up in the fifth in case he needed to bail out Sabathia. He wasn’t needed, so he had to wait for the sixth to enter the game.

Warren walked No. 7 Deven Marrero with two outs — it looked like he got squeezed pretty good by home plate ump Todd Tichenor — but otherwise escaped the sixth inning unscathed thanks in part to a behind-the-back grab …

… to end the inning. I’m pretty sure Gregorius would have had that grounder anyway — it looked like he was ready to made the play behind second base — but the behind-the-back grab is so much cooler.

In the seventh, No. 9 hitter Josh Rutledge poked an annoying two-strike single to right to start the inning. That was ominous. Mookie Betts followed with what looked like a go-ahead two-run homer. I don’t know if the rain knocked it down or if he just missed it, but boy, that was scary. Chris Young camped under it at the warning track. Phew. Warren handled the sixth and seventh innings with a one-run lead, and took care of the top of the order too.

The RailRiders Shall Lead Them
A one-run lead in the late innings is hardly comfortable. Not with the bullpen being so shaky of late, Yankee Stadium being so hitter friendly, and the Red Sox offense roughing the Yankees up the last two days. Thankfully, the Yankees tacked on some insurance runs.

Greg Bird plated the team’s third run of the night with a solo home run into the bullpen in the seventh inning. He made a really impressive mid-at-bat adjustment to time Jean Machi’s splitter. Bird took some ugly hacks at splitters earlier in the at-bat, but then waited back, dropped the bat head, and smashed the ball out of the park. Impressive.

One inning later, Rob Refsnyder absolutely crushed a solo home run off something called Heath Hembree. Absolutely demolished. I didn’t think Refsnyder had that kind of power. The ball cut through the rain drops and hit the back wall of the visitor’s bullpen to give the Yankees a 4-1 lead. Pretty good game for the kids, eh? Go RailRiders.

The Late Innings
Turns out Warren’s night was not over after completing the seventh inning. I figured Joe Girardi would go to Dellin Betances and Andrew Miller — even after pitching last night — because a postseason spot was on the line. No, he instead sent Warren back out for the eighth with a 3-1 lead. Warren needed a dozen pitches to get a strikeout, a ground out, and a line out to Gregorius. That’s three scoreless innings on 51 pitches for Warren. Can’t say enough about the job he did both in this game and this season.

After Refsnyder drove in that fourth run, Girardi went to Betances for the final three outs in the ninth inning. Two strikeouts and a pop-up later, the Yankees were postseason bound. The were led by the young (Bird and Refsnyder) and the old (Sabathia and Beltran) on Thursday. Postseason baseball returns to the Boogie Down.

Leftovers
The Yankees had eight hits and everyone in the starting lineup had exactly one hit except Murphy, who drew two walks. Young, Gregorius, and Alex Rodriguez drew walks as well. Rico Noel pinch-ran for A-Rod after his walk and was actually thrown out stealing for the first time. Looked like the wet infield slowed him down.

Dellin’s game-ending strikeout was the team’s 589th bullpen strikeout of the season, tying the 2012 Rockies for the MLB record. The Yankees have three games to break that one. Something tells me it’ll happen.

Just to be clear: the Yankees clinched a wildcard spot with this win. They still need either another win or an Astros loss to clinch the top wildcard spot.

And finally, this was the 10,000th win in franchise history. Clinch a postseason berth with your 10,000th win? Pretty cool.

Up Next
The final series of the regular season. The Yankees are off to Baltimore for a three-game series with the already eliminated Orioles. Wei-Yin Chen will start for the O’s. I guess Luis Severino will start for the Yankees will Warren coming out of the bullpen in this game. Love this team, you guys.