The Yankees dug themselves a bit of a hole early this season, and if they’re going to turn things around, they were going to have to have a great homestand. They did exactly that. The Yankees beat the White Sox by the score of 7-5 on Sunday afternoon. They took two of three from the Red Sox, three of four from the Royals, and now two of three from the White Sox. Couldn’t ask for a better homestand. The Yanks have won eight of their last 12 games overall.

Take The Lead, Then Re-Take The Lead
Boy did this game drag. Neither starting pitcher was particularly sharp, so there were a lot of long at-bats and long innings early on. The score was 4-3 White Sox going into the bottom of the sixth, which is when the Yankees first rallied to take the lead. It all started with an error too. Brett Lawrie pulled Jose Abreu off the bag with a throw, allowing Jacoby Ellsbury to reach with one out.

With two outs and two strikes, Carlos Beltran came through with a clutch two-run home run to give the Yankees a 5-4 lead. It just so happened to be his 400th career homer too. Beltran is the fourth switch-hitter in history to reach 400 dingers, joining Mickey Mantle, Eddie Murray, and Chipper Jones. He’s also only the fifth player with 400 homers and 300 steals. Barry Bonds, Alex Rodriguez, Willie Mays, and Andre Dawson are also members of that club. Good company, huh?

Beltran’s homer gave the Yankees a lead that proved to be short-lived. Dellin Betances allowed a stupid BABIP fueled run in the very next half inning. Abreu and Todd Frazier pulled soft ground balls through the left side to put runners on first and second with no outs, then Melky Cabrera slapped a double the other way that was fair by maybe a foot. Probably less: 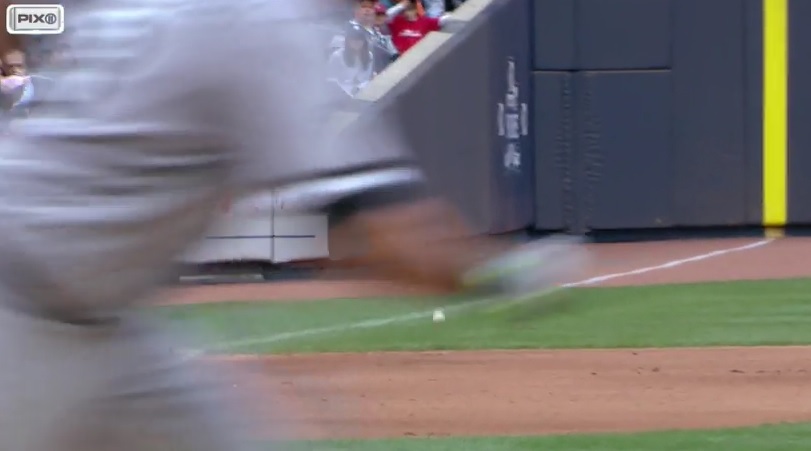 Bah. Baseball can be so stupid sometimes. The double tied the game 5-5 and set the White Sox up for a potentially big inning. The Yankees were in trouble.

The “save” in this game came in that seventh inning, if you ask me. The ChiSox had runners on second and third with no outs following Melky’s double, yet Dellin rebounded to escape the jam with a ground ball — the infield was in, so Frazier had to hold at third — and two strikeouts. Chicago could have conceivably scored two runs with outs that inning if some grounders or fly balls were well-placed. Betances stranded ’em. Well done.

The Yankees took the lead again the next half-inning. It all happened with two outs too. Didi Gregorius worked a two-out walk against Matt Albers, then pinch-hitter Chase Headley (!) came off the bench to rip a first pitch fastball into the right-center field gap for a run-scoring double. How about that? Headley went from having zero extra-base hits to having three in the last four games. Good times.

Headley’s double gave New York a 6-5 lead and later Brian McCann made it 7-5 with a solo home run against Nate Jones in the eighth. Andrew Miller struck out two in a perfect eighth and Aroldis Chapman struck out zero (wtf!?) in a perfect ninth. The White Sox did not have a base-runner following Melky’s game-tying double in the seventh. Some timely hitting and clutch bullpen work led to this win.

Tanaka Labors
For the second straight start, Masahiro Tanaka struggled on Sunday, though these struggles were different than the last time out. In his last start he got beat with the long ball. On Sunday the the White Sox strung together a bunch of hits and capitalized on some walks. Adam Eaton did hit a solo home run. The other three runs scored on singles with a combined exit velocity of about 150 mph.

Tanaka walked back-to-back hitters with one out in the second, then Avisail Garcia singled a run in with a ground ball through the left side of the infield. Following a pair of bloop singles in the fourth, Eaton laid down a squeeze bunt to score a run — he was thrown out at first on the play — and Austin Jackson followed with a bloop single to center. That whole inning was annoying. Three bloops and a squeeze bunt. Blah.

(Also, shout out to Eaton for the squeeze bunt. He went deep in his previous at-bat and the White Sox had runners on the corners with one out and the top of the order up. And Tanaka was very hittable. Playing for the big inning is for suckers.)

Aside from Eaton’s homer, the hardest hit balls against Tanaka did not score a run. Melky and Garcia were stranded after ripping doubles, and Frazier was stranded after whacking a hard hit grounder back up the middle. Starlin Castro did get to the ball, but he rushed the throw and wound up bobbling the transfer. Tanaka finished with four runs allowed on a season high eight hits and three walks. He fanned seven.

More than anything Tanaka struggled to get his splitter in the right spot. It was generally down — the splitter Eaton hit for a homer was decidedly not down — but too far down and in the dirt. Tanaka made it easy for the ChiSox to take the pitch Sunday. He threw 25 splitters and got only nine swings (36%) and four swings and misses (16%). Tanaka came into the game averaging 55% swings against the splitter and 24% whiffs.

Early Runs
The pitching line on Miguel Gonzalez would lead you believe the Yankees scored way more than three runs against him. He allowed five hits and five walks in only 4.2 innings. Gonzalez fanned one batter. The Yankees let him off the hook a few times, most notably leaving the bases loaded in the third. At least Castro beat out an infield single and Dustin Ackley drew a bases loaded walk with two outs to score two runs earlier that inning.

The Yankees scored their first run in a matter of four pitches in the first inning. Ellsbury reached on an infield single, Brett Gardner singled to put runners on the corners, then Beltran plated Ellsbury with a sacrifice fly. Ellsbury saw two pitches and the other two hacked at the first pitch they saw from Gonzalez. Hey, it worked, right? The Castro infield hit and Ackley walk drove in the team’s second and third runs of the afternoon.

Leftovers
Gregorius made what was probably the team’s best defensive play of the season in the sixth inning. It was certainly the most heads up and most athletic defensive play we’ve seen by a Yankee in 2016. Didi came off second base and had to jump to catch McCann’s throw on a steal attempt, but he still managed to reach down and apply the tag on Tyler Saladino while in midair. Check it out:

For the fourth time this season, Ellsbury reached on a catcher’s interference. There are 126 games to go, so the single season record is well within reach. What is the record, you ask? That would be eight by Roberto Kelly, who did it with the 1992 Yankees. Maybe if Ellsbury breaks the record the Yankees can trade him for the next Paul O’Neill?

Gardner had three hits and a walk on the afternoon. In fact, the top five hitters in the lineup went a combined 8-for-19 (.421) with three walks, a hit-by-pitch, a double, two homers, two steals, six runs scored, four runs driven in, and one strikeout. That will work just fine, thank you very much.

Box Score, WPA Graph & Standings
For the box score and up to the minute standings, head over to ESPN. MLB.com is the place to go for the video highlights. Also don’t forget about our Bullpen Workload and Announcer Standings pages. Here’s the win probability graph:

Up Next
The Yankees are heading to the lesser coast for a seven-game road trip through Arizona and Oakland. They’ll play the first of three against the Diamondbacks on Monday night. That’s a 9:40pm ET start. Chad Green will make his Major League debut and start that game, the Yankees announced this afternoon. They’re going to start him now rather than wait for Luis Severino’s next turn to come up to use the spot starter. Michael Pineda and Nathan Eovaldi get an extra day of rest this way. Lefty Robbie Ray will be on the bump for the D’Backs.