The Yankees could win literally every game against the Orioles the rest of the season, and going 5-6 in the first eleven games against them may still haunt them at the end of the year. Brutal. Just brutal. For the second time in as many days, the Yankees let a very winnable game slip away against the worst team in baseball. Tuesday final score was 6-5.

Tanaka’s Return
Not a good first start back from the disabled list for Masahiro Tanaka, though it would’ve been better had he not gone back out for the fifth inning simply to get to his prescribed pitch count (80). Tanaka labored in the fourth inning and, with his pitch count at 75 after four, I figured he was done. Aaron Boone wanted to get those last five pitches out of him though. In the future, please don’t treat big league games like rehab starts, mmmkay? Second time this series Boone got burned by trying to steal outs from his starter.

Tanaka’s first three innings were fine. A ground ball single in the first and a walk in the third. No big deal since Tanaka escaped the innings. In the second, Jonathan Schoop came this close … 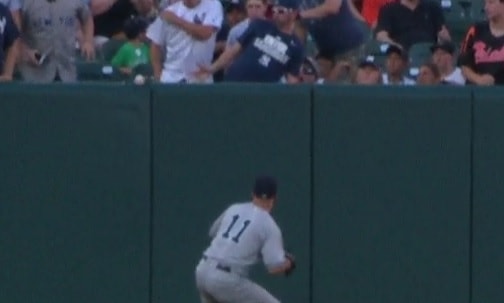 … to hitting the #obligatoryhomer. In fact, the umpires ruled it a home run on the field. The call was overturned, Schoop was awarded a double, and Tanaka was able to strand the runner and escape the inning. Three scoreless to start the game. Hooray for that.

Too bad the wheels came off in the fourth inning. With two outs too. Tanaka got two quick outs, then Chris Davis snuck a ground ball single through the shift. Dumb but it happens. Tanaka wasn’t unable to stop the bleeding. He walked Trey Mancini on seven pitches — Trey Mancini stinks, by the way — then Joey Rickard pulled a ground ball double down the line to score two runs. Miguel Andujar’s lack of range strikes again.

A throwing error by Andujar and another walk followed, and the Orioles had Tanaka on the ropes. He was able to bounce back and strike out Adam Jones with the bases loaded. Five straight hitters reached base with two outs and they were the 6-7-8-9-1 hitters. The worst hitters on the worst team. Tanaka’s final line: 4.1 IP, 6 H, 3 R, 3 ER, 2 BB< 5 K, 1 HR on 80 pitches. Or: Bad.

Three Runs In The Fifth
It took way too long to get to Andrew Cashner. The Yankees did not get their first baserunner until the fifth inning, when Didi Gregorius singled to left field with one out. Thirteen up, 13 down to start the game, and only one of those 13 batters hit the ball out of the infield. That was Brett Gardner, who flew out to left to start the game. Not being able to hit Cashner is Capital-A Annoying.

The Yankees finally got on the board in the fifth, right after the Orioles took that 2-0 lead. Gregorius stroked a one-out single and Miguel Andujar worked a rare walk to put two on with one out. Andujar hit fly ball down the right field line earlier in the at-bat that Rickard caught on the dive, but, when he landed, Schoop kicked the ball out of his glove as he ran by. For real. Andujar had new life and he took the walk. How about that?

I thought that ball was going foul given the way Bird watched it off the bat. Seemed a little fast with the swing. Fair it was, up and over the high wall in right field for a 3-2 lead. Sixth homer of the year for Bird. Really hope to see more of them going forward. The Yankees are decidedly short on lefty power.

Another Lead Given Back
Tanaka gave up the homer to Machado immediately after Bird gave the Yankees the 3-2 lead. The Yankees took the lead again in the seventh inning thanks again to Bird, who lifted a sacrifice fly to center. Gregorius started the inning with a double — Adam Jones missed the dive and the ball got by him — and moved up on Andujar single to left. Bird brought Didi homer for the 4-3 lead, and Neil Walker stretched it to 5-3 with a two-out single later in the inning.

The lead again disappeared in the next half inning. Shutdown innings are a stupid broadcaster talking point — you’re not supposed to allow runs in any inning, folks — but geez, every time the Yankees scored Tuesday night, they gave it right back. Adam Jones singles and Machado hit another homer, this one a two-run shot the other way over a leaping Aaron Judge. Judge was a few inches away from an incredible catch. Alas. The home run pitches: 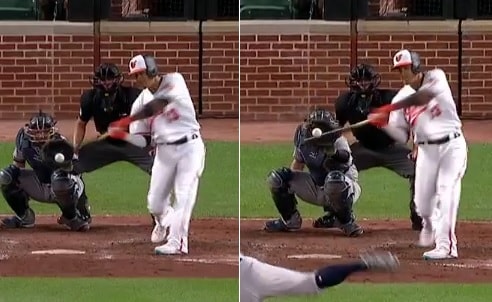 Good grief. Way to get beat by literally the only good player on the other team. Tanaka was nearing his pitch limit and Chad Green was running out of gas in his second inning of work. Maybe don’t let fatigued pitchers face one of the best player of the game? Could be cool. If the Orioles aren’t going to trade Machado to the Yankees, I hope they trade him to the National League. He’s wrecked them all season. Longer than that, really.

Anyway, the Orioles walked off with the win against Dellin Betances. Betances hit No. 9 hitter Caleb Joseph with a pitch, Jones poked a double on the line in the right field corner, and the Yankees intentionally walked Machado to load the bases with one out. Rock and a hard place. Do you face Machado with the game on the line (lol no) or give Dellin zero margin of error? The latter, obviously.

Betances almost wiggled out of it. Almost. He struck out Mark Trumbo, then Schoop slapped a hard-hit grounder the other way that clanked off Bird’s glove and into right field. Hit him in the glove! That’s the inning-ending out!

Oh Greg, sweetie. You were doing so good. Between that and Walker letting a potential double play ball go through his damn legs in the first game of Monday’s doubleheader, it has not been a good series for the guys who are involved in more defensive plays than anyone else on the field. Good first base defense is one of those things you don’t fully appreciate until you aren’t getting it.

Leftovers
Three hits for Sir Didi, who also got thrown out at second base in the top of the ninth trying to advance on a ball in the dirt. Gregorius has been thrown out on the bases far too many times this season. He’s 10-for-16 in steals and has made three other outs on the bases too. Maybe give him the red light for a bit. I know middle infielders are supposed to be fast, but no. Just no.

Jonathan Holder and David Robertson retired all five men they faced. Green and Betances were charged with three runs in 2.2 innings. When things go wrong, they really go wrong.

Box Score, WPA Graph & Standings
ESPN is the place to go for the box score and updated standings. MLB has the video highlights and we have a Bullpen Workload page. Here’s the gross as hell loss probability graph:

Up Next
The Yankees and Orioles wrap up this four-game, three-game series Wednesday night. Sonny Gray and Dylan Bundy are the scheduled starting pitchers for the series finale.