Earlier today we kicked off our 2017 Season Review series with the amazingly awesome Aaron Judge. Judge will win AL Rookie of the Year in a landslide and he should finish high up in the AL MVP voting. He might even win! I doubt it though. Jose Altuve seems to have a leg up, but Judge deserves to be in the conversation. His season was that good.

One thing I didn’t touch on in the Judge review post was his strike zone, because that’s worth its own post. As we saw all season, and especially in the postseason, Judge was on the wrong end of a lot of called strikes on pitches down in the zone, below his knees. He had a lot of low pitches called strikes. A lot. He’s a 6-foot-7 behemoth, yet umpires called pitches at knees like he’s a run of the mill 6-foot-1 or 6-foot-2 player.

Here’s how the MLB rulebook defines the strike zone:

The STRIKE ZONE is that area over home plate the upper limit of which is a horizontal line at the midpoint between the top of the shoulders and the top of the uniform pants, and the lower level is a line at the hollow beneath the kneecap. The Strike Zone shall be determined from the batter’s stance as the batter is prepared to swing at a pitched ball.

Pitches at the knees are often called strikes as well. The bottom of the strike zone has been getting lower and lower for a while now. And I’m not sure I’ve ever seen a hitter take more called strikes on pitches below the knees than Judge this season. A cherry-picked example:

Baseball Savant allows us to look at pitches in certain zones within the strike zone. Here is their detailed strike zone map: 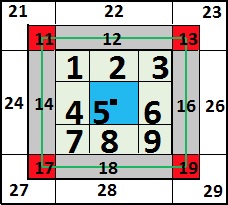 I’m interested in zones 17, 18, and 19. Those zones at the bottom of the strike zone, pretty much right at the knees. Here are Judge’s regular season numbers:

When Judge took a pitch at the knees this season, in zones 17-19, it was 50/50 whether it would be called a strike. Now here are the MLB averages, not including Judge:

Hmmm. HMMM. First of all, Judge took more pitches in zones 17-19 than the average hitter, probably because those pitches are way down to him and he believes they’ll be called balls. And when he took a pitch at the knees, in zones 17-19 per that Statcast defined strike zone, it was 16.4 percentage points more likely to be called a strike than the rest of the league. Not cool, umpires. Not cool.

Had pitches in zones 17-19 been called strikes at the league average 33.9% rate for Judge, he’d have gotten 53 extra balls this year. I know getting 53 balls instead of 53 called strikes doesn’t sound like much, and it’s not in the grand scheme of things, but in one individual game it could be huge. It could be a walk instead of a strikeout. It could be a 3-1 count instead of a 2-2 count. In an individual game, the impact of one of those 53 extra balls could be enormous.

On one hand, trading a few extra strikes at the bottom of the zone for many more balls at the top of the zone sounds like a good trade-off. On the other hand, many more pitches are thrown down in the zone than up. The league average numbers during the regular season:

There are three pitches in zones 17-19 for every two pitches in zones 11-13. Given that, it would be more beneficial for Judge to trade called strikes at the letters for balls at the knees than to stick with the status quo, in which he trades called strikes at the knees for balls at the letters. Pitchers attack Judge down in the zone. They did it all season. The fewer gift strikes they get down there, the better.

The solution is not for Judge to swing at more pitches down. That’s asking for trouble. The league averages on pitches in zones 17-19 were a .204 AVG and a .092 ISO. You can’t really do anything with pitches down there. The solution is umpires making the adjustment for the 6-foot-7 hitter and calling a proper strike zone when Judge is at the plate. And maybe that means the perpetually quiet and respectful Judge has to bark at umpires a little more.

“He’s extremely respectful, but I don’t necessarily think arguing for yourself is being disrespectful if you do it in the right way,” said Joe Girardi during the ALDS. “He’s been a little more emotional. Yeah, I mean, if he thinks it’ll help (then argue). Yeah, of course. And I think sometimes young kids are afraid to say something. But I definitely wouldn’t have a problem with it.”

I have no idea whether there’s any precedent for this, but it would be cool if the Yankees reached out to MLB this offseason and said hey, Judge is getting hosed by the umpires. He’s one of the best and most popular (by jersey sales) players in the league, and he’s having at-bats taken away from him because umpires aren’t calling a proper strike zone. Send them some video. The Yankees wouldn’t be asking for an advantage. All they’d be asking for is fairness. That’s not too much to ask, is it?