A few years ago the Yankees had a clear preference for physically huge power pitchers. Peak CC Sabathia was basically the perfect Yankees pitcher. He’s enormous and he had a big fastball and a wipeout breaking ball, allowing him to rack up strikeouts and limit walks. Dellin Betances is another big power pitcher. Same with Michael Pineda, who the Yankees more or less hoped would develop into a right-handed version of peak Sabathia.

The Yankees have started to open their minds a bit and pursue different types of pitchers. Masahiro Tanaka is a master craftsman. Sonny Gray is a 5-foot-10 righty who will throw the kitchen sink at you. Jordan Montgomery is a big dude (6-foot-6) like Sabathia and Betances and Pineda, but he’s more of a command and control guy than a power pitcher. He uses his deep arsenal to change speeds, change eye levels, and keep hitters off balance.

Montgomery was the best rookie pitcher in baseball this season, at least according to fWAR, and much of his success was tied to deception. It started with that deep arsenal. Here is his pitch selection throughout the season: 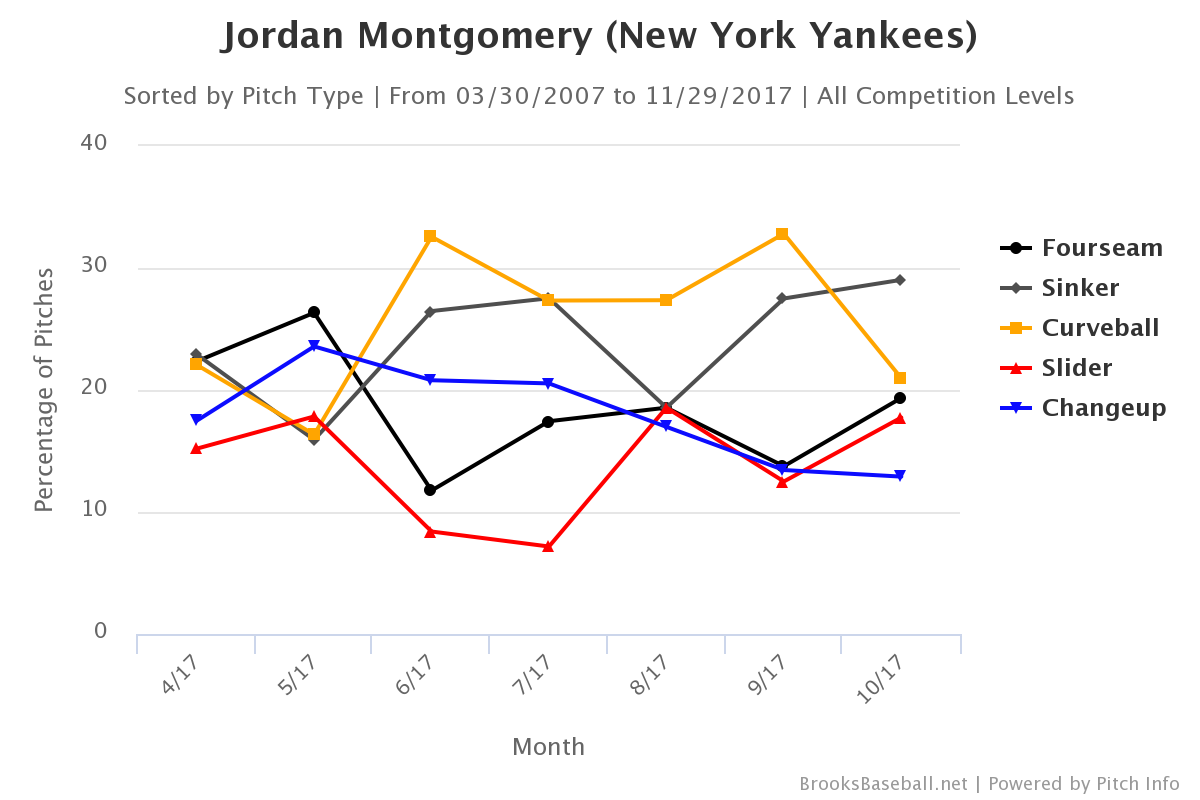 Montgomery abandoned his slider a bit in June and July, otherwise he never threw any pitch less than 12% of the time in a single month. Five pitches used regularly. Not many veteran pitchers do that. Montgomery did it as a rookie, and he did it very effectively.

Using five different pitches regularly is not necessary to be considered a command and control pitcher, nor is having five pitches necessary to have deception, at least in the traditional baseball sense of the term. When we talk about deception, we’re referring to hiding the baseball and making it more difficult to pick up. Some pitchers turn their backs during their delivery. Others have a herky jerky delivery. Something like that usually qualifies as deception.

In Montgomery’s case, he creates deception with his sky high release point and the whole “tunneling” phenomenon, the idea that each pitch looks the same as it travels toward the plate, before breaking in different directions at the last moment. This old GIF by Drew Sheppard from back when Matt Harvey was still good is a personal favorite. It’s a fastball and a slider, and you can see how the pitches look the same until right before reaching the plate.

Pretty neat, huh? One of Montgomery’s strengths is tunneling his wide array of pitches similar to the Harvey GIF, at least according to the relatively new tunneling numbers at Baseball Prospectus. These stats measure the distance between sets of back-to-back pitches at various points along the pitch’s flight, and they do it thousands of times across the season, for every pitch the pitcher throws. Here is the 2017 release point differential leaderboard:

Long story short, these numbers are telling us these pitchers release their pitches from nearly the same spot each time. They have tight and consistent release points. Everything comes out of their hand from the same place, so, for example, you can’t tell the pitcher is throwing a slider because he drops down a bit. Here is a plot of Montgomery’s release points, just to drive home the point: 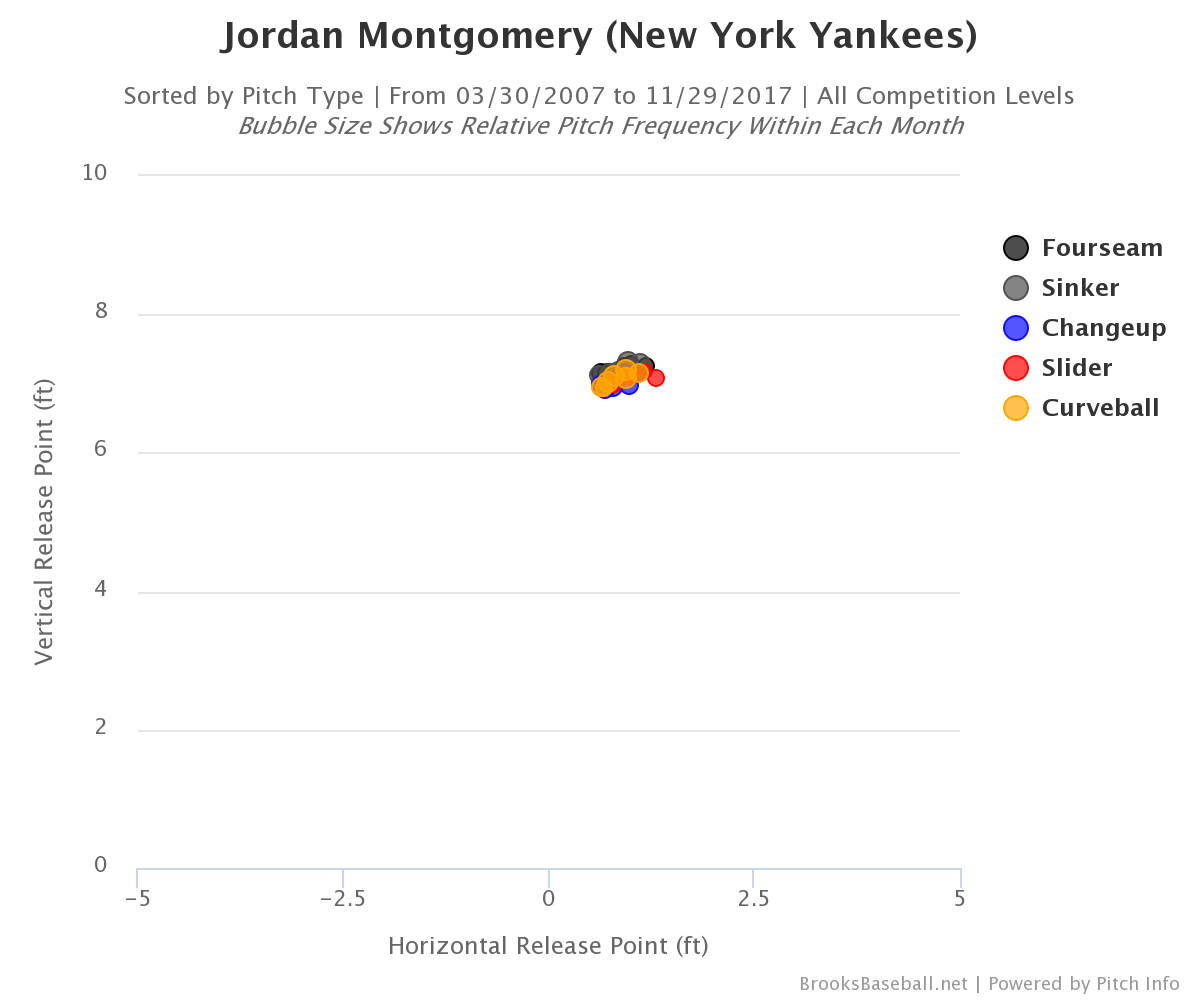 Montgomery’s 1.88 inch release differential is easily the lowest among New York’s starters. Pineda was second at 2.11 inches. Tanaka was next at 2.26 inches. Severino had the rotation’s largest release differential at 3.13 inches this season. Here’s what his release points looked like, for reference: 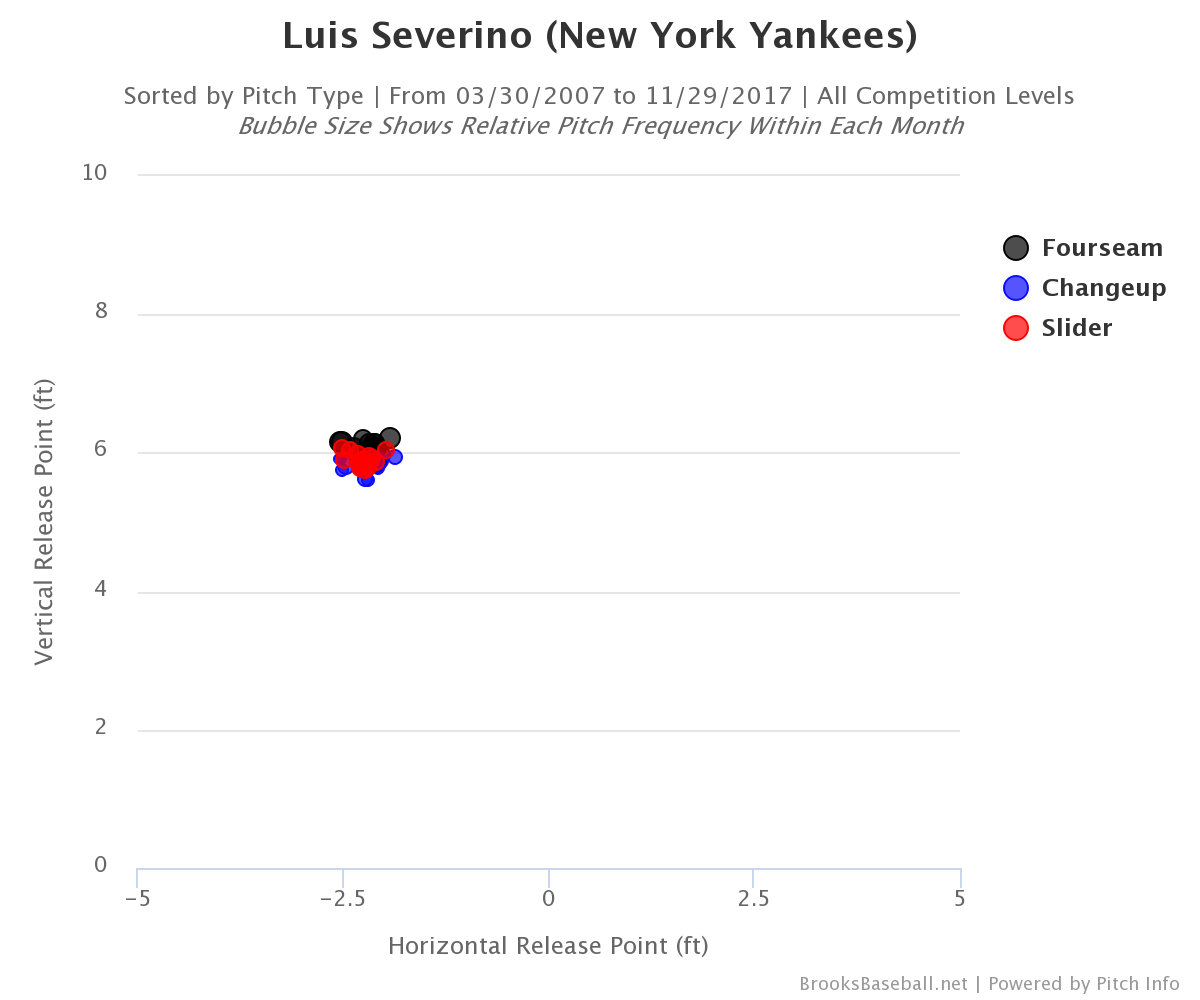 That’s a much larger blob than Montgomery’s. Having a tight, consistent release point is a good thing, but having a more spread out release point isn’t automatically bad. I mean, Severino’s release differential was one of the largest in baseball this year, and he was a top ten starter. Clayton Kershaw’s release differential (3.22 inches) is even larger than Severino’s and he’s pretty good at this whole pitching thing.

The release point is only one piece of the tunneling equation though. Remember the Harvey GIF? The batter’s brain is reading fastball and telling his arms to start swinging before the slider really starts to slide. The more your pitches look the same as they approach the plate, the less time the hitter has to react. To measure this, Baseball Prospectus has a release/tunnel differential ratio stat. Here’s their explanation:

The tunnel point is set at 23.8 feet from home plate, which, according to Baseball Prospectus, is “the decision-making point based on 175 milliseconds and a league-average fastball.” Okie dokie. How tight is the pitcher’s release point? How close together are his pitches at the tunnel point? Compare those two and you get the release/tunnel ratio. The smaller the number, the better. Here’s the release/tunnel ratio leaderboard:

Montgomery releases everything close together and the pitches stay close together on their path to the plate. And when you’re throwing five different pitches regularly, the hitter has basically no idea what’s coming, at least when Montgomery executes properly. Mistake pitches happen. But, better than nearly every other starter out there, Montgomery tunnels his pitches consistently.

I know there’s a lot of scary jargon in here like release differential and tunnel points and all that. In plain English, this all means Montgomery creates deception with his ability to keep his pitches close together for as long as possible as they travel toward the plate. He’s throwing one of five pitches at you, and you don’t know whether you’re getting the four-seamer or sinker or curveball or slider or changeup until the pitch is more than halfway to the plate. Imagine how hard it is to hit like that?

There is definitely something to be said for having an overpowering fastball and a wicked breaking ball like Severino, tunnel points be damned. Montgomery doesn’t have the natural gifts to be that type of pitcher though. He’s 6-foot-6 and he releases the ball from way up here … *holds hand far above head* … and he uses his ability to make his five pitches look the same to deceive hitters. Big overpowering lefties like peak Sabathia are pretty great. Deception guys like Montgomery can be pretty good too.