The Yankees have traded away their starting second and third basemen within the last two weeks, and while they have a bevy of young infielders on the cusp of the show, a contender may not want to go with two rookies on the infield. The Yankees have put a lot of faith in young players the last year or two, but things are different now. Last year they were talking about being a team in transition. Now they’re clearly a World Series contender.

A veteran infielder, someone who can help bridge the gap to the Gleyber Torreses and Miguel Andujars of the system, could be on the Yankees’ shopping list this winter. Will they break the bank for an infielder? Almost certainly not given the plan to get under the $197M luxury tax threshold. A lower cost free agent would be ideal, if such a thing exists. One possible candidate: Howie Kendrick. Let’s see whether the 34-year-old is a potential fit. 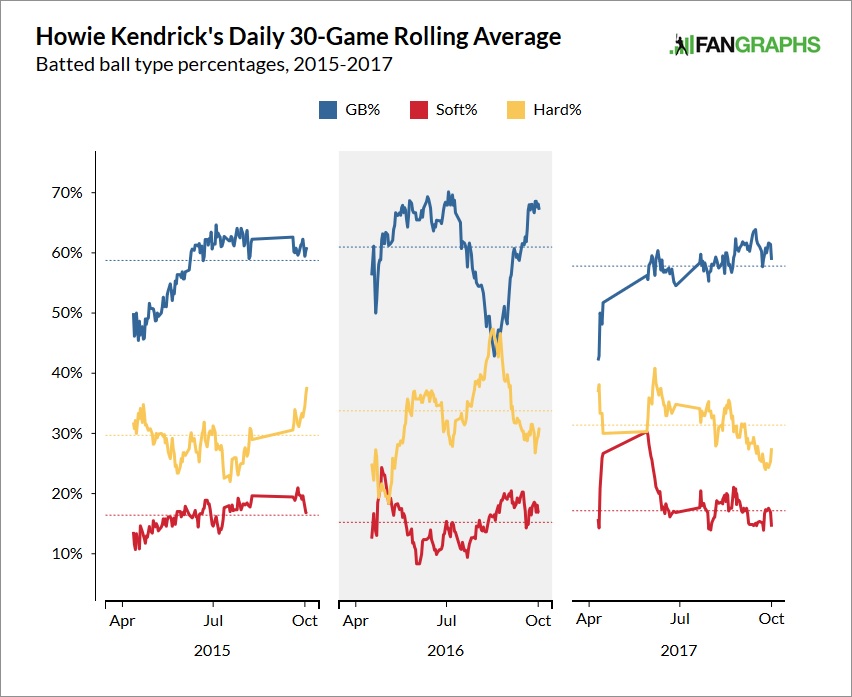 Kendrick’s days of playing second base full-time are over. He hasn’t been a regular second baseman in two years now. The Dodgers moved him into more of a utility role two years ago, when he played mostly left field but also some third base. That continued this past season as well. Here’s a quick breakdown of Kendrick’s defensive assignments from 2016-17:

Kendrick is my favorite kind of versatile. He can play lots of different positions but he can’t play any of them well. Is that really a positive attribute, that a player can hurt you at many more positions instead of one? If the Yankees consider Kendrick for one of their infield positions, I think they have to look at him at third base, not second. And, when time comes for Gleyber or Andujar or whoever, the Yankees could move Kendrick into more of a supersub role.

This is only the second time Kendrick has been a free agent. He signed an extension with the Angels way back when, and when that expired, he re-upped with the Dodgers for two years and $20M. That is the contract that just expired, and he had to wait until February 4th to sign it. Here are two contract estimates:

Given their payroll situation — the Yankees have about $25M to spend under the luxury tax threshold, though some of that has to be set aside for midseason additions — I would be surprised if the Yankees spent $8M for an infielder next year. Not with all the young guys coming. Would they spend $6M? Eh, maybe. Would they guaranteed someone like Kendrick two years? I don’t think so. Gleyber, Andujar, Tyler Wade … they’re all coming.

Unless you’re a reliever, the free agent market is moving very slowly this offseason, so I wonder whether Kendrick will have to wait until right before Spring Training to sign again. If that happens, the Yankees might be able to swoop in with a low lost one-year contract ($4M?) and convince Kendrick to come to New York, accept a third base/super utility role, and have a shot at his first career ring.

I think so. For sure. It has to make sense financially under the luxury tax threshold, of course, but I think Kendrick would fit nicely as a stopgap infielder. Put him at third — or hold your nose and put him at second if Andujar blows everyone away in Spring Training — until the kids start to force the issue, then adjust. Kendrick can cover multiple positions and he can still hit a bit. What else are the Yankees looking for, exactly?

Maybe I’m wrong, but I have a really tough time believing the Yankees will go into next season with two neophyte infielders after spending so much time and effort upgrading the roster. That doesn’t mean I think they’ll go bonkers and sign Mike Moustakas or trade for Jason Kipnis. I think they’ll look for a bargain free agent for depth and Kendrick could be an option, assuming the free agent market continues to move at a slow pace.