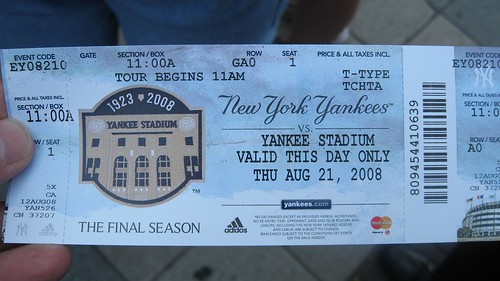 As part of the last season at Yankee Stadium, my dad and I yesterday morning took one of the Behind-The-Scenes tours the Yankees offer at the old stadium. The tour — which started at 11 a.m. — lasted an hour, and we were taken around to parts of the ballpark generally closed to the public. We walked on the field, sat in the press box, enjoyed the view from the dugout and strolled through the Yankee Clubhouse.

Our tour started with a walk through the press box where Sunday’s lineups were still penciled on the big board. I sat in the seat usually reserved for the reporter from the Asahi Shinbum, and I could see the spot from which Peter Abraham blogs every night.

The best seat in the house belongs to the official scorer. He sits on a platform above all of the reporters with a microphone so that the announcers, writers and game officials hear all of his decisions.

After the press box, we walked through the empty stadium en route to Monument Park. The seats are looking a bit worse for the wear, and the stadium keepers were still cleaning up from the home stand.

In Monument Park, we had more time to explore the grounds that one would during a game day. We could examine the monuments, plaques and retried numbers. (On a related note, I hope this guy comes back soon.)

After enjoying Monument Park, we walked past the left field foul pole on the way to the Yankee dugout. The Yankees prefer the first base side of the stadium because the third base dugout sits in the sun during day games. The bullpen phone looks just as neat in real life as it does on TV, and the view into the crowd is rather impressive.

Following the jaunt into the dugout, we ventured down into the clubhouse where cameras are not allowed. Chien-Ming Wang had a package from Taiwan in front of his locker. Mike Mussina’s whiteboard was nowhere in sight, and Brian Bruney’s locker was sporting a fantastic bowler hat. As the longest tenured Yankee, Mariano Rivera had the primo corner locker.

As we left the clubhouse and walked back to the field to conclude the tour, a sign with a famous quotation greeted us as it does every Yankee during every home game. I have tickets for just one more Yankee game at the old stadium, and if this tour is my second-to-last trip to the House that Ruth Built, it will server as a fitting memorial a baseball cathedral.