River Ave. Blues » What to do with Marcus Thames
Jeter wants to 'call the shots'
RAB on The Shore Sports Report 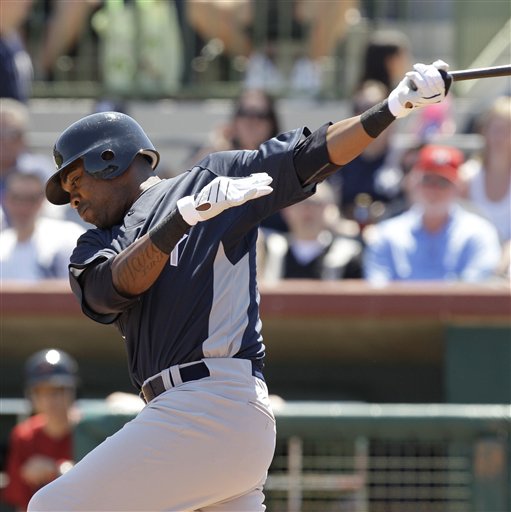 Let’s cut right to chase here: Marcus Thames has been absolutely dreadful in Spring Training so far. He’s reached base in just four of his 33 plate appearances, and all three of his hits are singles. Thirteen of those plate appearances, or nearly 40%, have ended with strike three. That’s not what the Yankees expected when they offered him a chance to win a job on their bench back in February. We talk about how insignificant Spring Training stats are all the time, and generally they are, but there are some instances in which they do have some meaning. One of those instances is when you have a guy like Thames trying to win a job.

Unfortunately the Yankees have already jettisoned Thames’ primary competition from camp, shipping Jamie Hoffmann back to Dodgers. Hoffmann’s spring performance wasn’t anything to write home about either (3-for-23, three walks, one strikeout), but unlike Thames he’s able to contribute something beyond offense. Baseball America rated him as the best defensive outfielder in the organization before he was returned, and he’s capable of double digit steals. Thames is a proven commodity on both defense and on the bases, posting a -12.2 UZR/150 in over 1,760 innings in leftfield, and he’s stolen a grand total of three bases in over 500 big league games. If he’s not hitting, he has no value. It’s that simple.

With Hoffmann gone and almost all of the other non-roster invitees shipped out, it leads us to believe that Thames has all but locked up a spot on the 25-man roster. He’s a Proven Veteran™ after all, and over the last three years he’s hit .263-.326-.541 with a studly .370 wOBA against lefthanders. That’s going to his primary job, to come off the bench and pinch hit against the lefty late in the game or occasionally start against one in lieu of Brett Gardner. The track record is certainly there, but Thames isn’t young (turned 33 earlier this month), and over the last four years he’s become increasingly more susceptible to fastballs (0.72 runs above avg against fastballs per 100 thrown in ’06, 0.40 in ’07, -0.07 in ’08, and -0.24 in ’09). If that’s the not the sign of a guy losing some bat speed, then I don’t know what is.

At this point, the only other realistic in-house option is Kevin Russo, who was just shipped to minor league camp. He had himself a very nice camp (8-for-25, three doubles) and offers the ability to play all over the infield and fill in at the outfield corners if need be. Russo will never offer the power Thames has, even with the latter in his decline phase, but he’s got better plate discipline and is more contact oriented. It’s an imperfect solution to an imperfect situation.

Despite his struggles, it’s all up guaranteed that Thames will break camp with the Yankees as their designated lefty masher. He can opt out of his contract if he doesn’t make the team, so there’s no option of stashing in the minors and hoping he finds his stroke. Joe Girardi rolled out the excuse that he hasn’t face many lefties this spring, but they’re supposed to this weekend so we can see how that goes. Scheduled to face southpaws Jon Lester and David Price within the first four games of the season, the Yanks are going to need Thames to start hitting and soon. Otherwise they’re better off taking 0-fers from Brett Gardner while reaping the rewards of his defense as they prowl the waiver wire and trade market for a suitable fill in.