Tonight’s game felt a bit familiar. Not completely familiar — when the Rays blew out the Yanks in early 2009 they hit Chein-Ming Wang in the early innings. It took until the fourth to rough up Javy Vazquez, though the Rays did a pretty good job of it. David Price was on his game, looking strong until his pitch count crept up to and then over 100.

Through the first three innings David Price looked more like an ace than the Rays’ No. 4 pitcher. His only blemish to that point was a four-pitch walk to Nick Swisher, but he retired the next three with ease. In the fourth, though, he ran into trouble on the very first pitch. Nick Johnson pulled a pitch on the outside corner for his first base hit of the season, setting up a scoring opportunity for Teixeira and A-Rod.

After two curveballs, a ball and a called strike, Price delivered a fastball low and away, which A-Rod fouled off for strike two. He went to the changeup with two strikes, and left it high and away. A-Rod got his arms extended and smoked it over B.J. Upton’s head for what appeared to be a double. Nick Johnson chugged around the bases and scored, drawing a throw that allowed A-Rod to take third. An errant throw sent him home.

A-Rod was credited with .201 WPA for the play, though this is where individual player WPA breaks down somewhat. Should A-Rod get credit only for the double? Or should he get credit for creating pressure, taking third and drawing the throw, thereby provoking the error? I’m of two minds but lean towards the latter.

Javy didn’t look quite sharp when he came out for the fourth. Ben Zobrist opened the inning with a four-pitch walk. After Evan Longoria flied to to center, Carlos Pena came to the plate. Javy seemed a bit focused on the runner, throwing over before each pitch. Perhaps he thought the chances of Zobrist running were greater with the lefty up.

None of the pitches to Pena was particularly good. The first pitch, a curveball, stayed high for ball one. He got the second pitch, a 90 mph fastball, on the inner half, and Pena fouled it off for strike one. The at-bat’s final pitch, a waist-high 89 mph fastball, went over the right field fence and tied the game. In itself it wasn’t terrible. The game was tied, there was plenty of baseball left. It’s what came net that sunk the Yanks.

While Javy’s final line looked a bit ugly, he did impress by working out of a jam in the second. Longoria started things by grounding an outside fastball, the fourth outside pitch of the at-bat, to right for a single. Carlos Pena followed by drawing a seven-pitch walk, coming back from an 0-2 hole. B.J. Upton had an RBI opportunity, but instead grounded one to the right side. He cost the team an out, but set them up with second and third with one out.

After dropping a curve for strike one, Javy came back with two straight changeups to Willy Aybar to record the strikeout. He again worked exclusively with his secondary stuff, two curveballs followed by two changeups, to finish the inning by retiring Dioner Navarro. The Rays’ WE after the Pena walk was .644. Navarro’s ground out brought that back to the mid-inning .500.

This was not the best way to celebrate a return to pinstripes. At first it looked like Javy might have gem in him. He set down the Rays 1-2-3 in the first, worked out of a jam in the second, and returned for a 1-2-3 inning in the third. Things fell apart in the fourth, and at that point he put a lot of strain on the Yankees’ offense to score runs off David Price, who, again, looked like an ace for most of the night. Even with his 1-2-3 fifth, Jazquez had already claimed the title of goat.

With the lefty on the mound, Joe Girardi once again started Marcus Thames over Brett Gardner. Quickly, Thames is showing that he might not be the best candidate to play the field. He did pick up a hit, but his defense cost the Yankees two runs. After Vazquez recorded the second out of the inning, the Rays were up 3-2 with runners on first and second. Jason Bartlett drove a liner to left. Thames tried to dive and catch it but could not. I imagine Gardner would have been there and would have stayed on his feet while making the play. 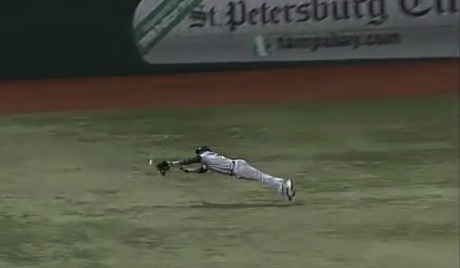 The question of platooning Gardner really comes down to the value of the player replacing him. Does the potential of Thames’s bat against lefties really outweigh his poor defense? Sometimes he might get a big hit where Gardner would have floundered, but I think it’s more often that he’ll cost the team with his glove. Joe Girardi will hopefully abort this experiment by the time the Yankees face the Angels next week.

Everything after the Pena homer.

A-Rod’s double, Johnson’s two hits, the fight the Yanks put up in the eighth.

Which is not so awesome tonight. 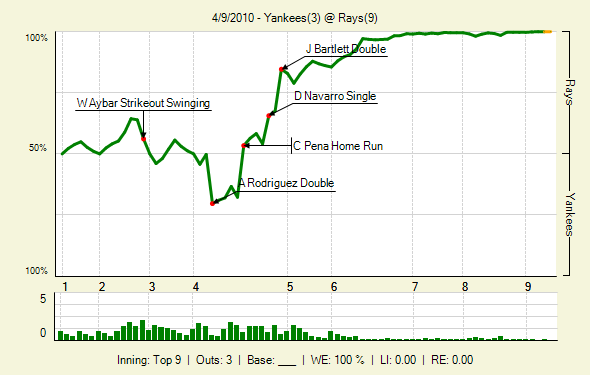 Check out FanGraphs for the full box score.

The game is on FOX tomorrow afternoon. This is me being excited about that.