In David Appelman’s never-ending quest to take over the (baseball statistical) world, FanGraphs introduced two new metrics yesterday called Shutdowns and Meltdowns. It’s a simple idea involving relievers and win probability. A Shutdown (SD) is when a reliever accumulates at least 0.06 WPA in an outing, while a Meltdown (MD) is when he accumulates no more than -0.06 WPA. In English, they refer to when a guy comes out of the bullpen and increases or decreases his team’s chances of winning by at least six percent. Got it? Simple enough. 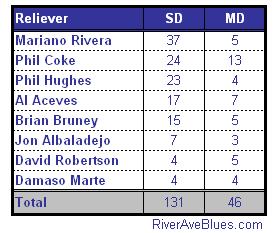 Last season, the Yankees’ bullpen recorded 141 SD, the third most in the game behind only the Mariners (159) and Dodgers (155). The chart to the right has the breakdown by pitcher; the missing ten belong to guys like Edwar Ramirez, Jose Veras, and Brett Tomko, who weren’t worth the time to include. I went with the core guys only. On the flip side, they had the sixth fewest MD with 62, and their +79 SD-MD differential was second only to Seattle, who had a staggering +90 mark. I don’t think it’s possible to win 103 games with a shaky bullpen, so these numbers really aren’t much of a surprise.

Fast-forward to this season, and we see something a little different. Yankee relievers have racked up just 17 SD (tied for 21st) but only eight MD (tied for the fewest), good for a +9 SD-MD differential that’s tied for the 12th best in the game. The chart down and to the left has the full breakdown. This might make it sound like the Yankee bullpen hasn’t been getting the job done, and while that’s true to a certain extent, it doesn’t tell the whole story. 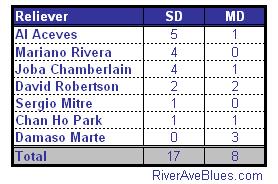 In the 28 games they’ve played, the starting pitcher has completed at least six innings 17 times (60.7%) and at least seven innings a dozen times (42.9%). That’s a ton. Add in the fact that ten of their 19 wins came by at least four runs, and you’re talking about very few really high leverage spots where a reliever could generate as much a 0.06 WPA without throwing multiple innings. Just as an example, let’s look at Wednesday’s game.

Sergio Mitre had just surrendered a two-run homer to Ty Wigginton in the 8th inning to bring the Orioles to within three runs. Damaso Marte was summoned to face the lefty Nick Markakis with one out, and at the time the Yankees had a 94.6% chance of winning the game. Five pitches later, Markakis had struck out, increasing the Yanks’ chances of victory to 96.2%. Marte gets credit for that 1.6% increase, or 0.016 WPA. It was the late innings and technically a save situation, but Marte could only muster about a quarter of a SD. That’s what’s going on this year with Yankee relievers, the opportunity for Shutdown appearances just haven’t been there. Frankly, I like it this way.

I don’t believe SD and MD have any analytical value because they lack context, meaning how the guy actually went about increasing or decreasing his team’s chances of winning. If you’re an end results kind of person that doesn’t worry too much about the process, then this is for you. For me, SD and MD just serve as nice reference stats, giving us an idea of who’s generally gotten the job done and who hasn’t.

Demoting David
A roster move on the horizon?