Felix Hernandez deserves better than this. Boy are these Mariners bad, like cover your eyes and hide the women and children bad. They had no business being on a big league field Monday night; the Yankees completely outplayed them in every facet of the game after the nearly two hour long rain delay. The result was a 10-3 win and Seattle’s 16th loss in a row. Yes, 16th.

Umpires these days are pretty terrible, but there are few worse than Balkin’ Bob Davidson. He blew a call at first base in this game that didn’t directly lead to the loss for Seattle, but it certainly didn’t help. Russell Martin was on first base with one out after Adam Kennedy whiffed on his ground ball at third, then he broke for second on Andruw Jones’ dinky little infield grounder. Justin Smoak fielded the ball and looked at second before turning around and flipping the ball to Jason Vargas as he covered first. Jones hustled and beat him to the bag by a fraction of a second, or at least Davidson thought so. The replays showed that Andruw was out, but instead the inning lived on.

Eduardo Nunez was the next batter and he singled, driving in Martin. Brett Gardner singled through the drawn-in infield one batter later to drive in Jones. Derek Jeter hit a ground ball to second but Dustin Ackley’s throw home a) was offline, and b) hit the bat in front of the plate and deflected away from catcher Miguel Olivo. Nunez would have scored anyway, but it was still pretty funny. Curtis Granderson then drove a ball to center for a sac fly, plating Gardner. Mark Teixeira singled through the left side to drive in Jeter. Robinson Cano finally ended the madness with a ground ball, but the inning should have been over much sooner. Kennedy has to make the play on Martin’s ground ball, and the play at first was blown. Fallacy of the pre-determined outcome, yadda yadda yadda, but the game was essentially over after four unearned runs scored in the inning (five total).

For all the complaining about the Yankees’ offense, watching the Mariners’ offense is an eye-opening experience. I didn’t know lineups got that bad. These guys hack at everything and refuse to work the count and chase bad pitches and will do so until the game is over. Ackley is the only guy on the team with a plan at the plate that is capable of executing it right now. There’s one big leaguer in the lineup. One.

Freddy Garcia was junk-balling them to death and the Mariners played right along; 22 (!!!) of the 31 batters he faced saw three pitches or less. He did allow eight hits in 7.2 IP but a lot of that came after the game was blown open and he started pitching to the score. Don’t laugh, Freddy threw a lot more fastballs and pounded the zone with the big lead in an effort to get quick outs, and it worked. I still don’t trust him against good offenses, but Garcia has already exceeded every possible expectation this year and keeps doing it every time out.

That five-run fourth inning cemented the win, but the Yankees did start the inning with a 3-1 lead. Teixeira hit a two-run homer in the first inning, driving the ball into the second deck in left field after Granderson’s walk. You don’t see many balls hit there, it was quite a shot. Jeter also chipped in a homer, believe it or not, a solo shot the other way in the third. It was his fourth long ball of the season, and he now has many homers in the Bronx has he does in Texas. They tacked on another run in the sixth via a Gardner double and another Granderson sacrifice fly.

There was a lot of offense as you’d expect in a blowout win, so let’s recap … Jeter had two hits, the homer and a triple later in the game. Derek had 12 extra-base hits in 62 games before going on the disabled list, but he’s already got nine in his 17 games back. He’s hitting .324/.385/.521 since coming back. Maybe he isn’t dead yet after all. Grandy had a hit, a walk, and the two sac flies. Tex had a pair of hits including the homer. Nick Swisher singled and both Nunez and Gardner singled and doubled. Cano was the only one without a hit. For shame.

Jeter did his patented jump throw play in the second inning, but the replay showed that Kennedy was safe at first. Second time in two days the first base ump blew the call on the jump throw, but hey, I’m not complaining. Bob Davidson is just a terrible umpire.

Congrats to Steve Garrison for making his big league debut. He retired the last two batters of the game on a line out and a fly ball, which I’m sure felt good after seven years in the minors. Boone Logan also struck out the only two men he faced. The Yankees are 20 games over .500 for the first time all season.

MLB.com has the box score and video highlights, FanGraphs the other stuff, and ESPN the updated standings. 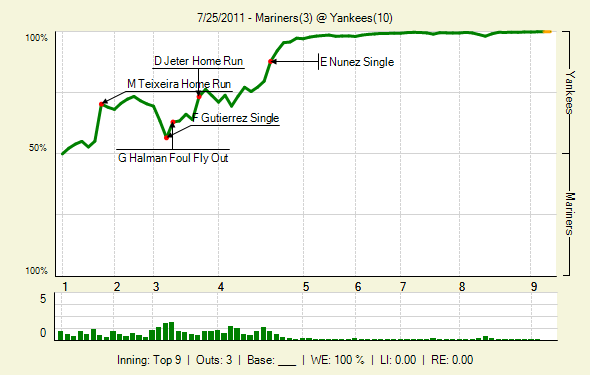 Hopefully it won’t rain Tuesday night for game two of the series, when Doug Fister gets the ball against CC Sabathia. RAB Tickets can get you to the Stadium if you’re interested in going.