No one wants to head into the All-Star break coming off a loss, so CC Sabathia made sure his team wouldn’t have to do that on Sunday. He was the starter, setup man, and closer against the Rays, tossing his first complete game shutout since 2009.

Two of the first five Rays batters hits doubles. None of the next 24 made it as far as second base. Some iffy baserunning (thanks, B.J. Upton) helped out with that last part, but the point is that Sabathia overpowered Tampa’s lineup, recording 19 of his 27 outs on the infield. He was throwing his hardest in the ninth inning, blowing a 98.4 mph heater passed Elliot Johnson on pitch number 113, the last of the game. Only four batters saw a three-ball count. Complete dominance, CC looked like he was ready to pitch the 10th and 11th innings if it got that far.

Sabathia’s outing resulted in 0.791 WPA, the second highest WPA by a starting pitcher this season. Only Francisco Liriano’s no-hitter was better (0.829). His 87 Game Score was the 17th best in baseball this year and the best by a Yankee. You have to go back to this 2005 game to find a higher Game Score among Yankee hurlers. By my completely amateurish calculation, Sabathia went from 4.4 WAR to 5.0 WAR in this game alone, second only to the great Roy Halladay among big league starters. His scoreless streak is now a career-high 23.2 IP. It just doesn’t get much better than this. Enjoy the Bahamas, big fella. You’ve earned it. 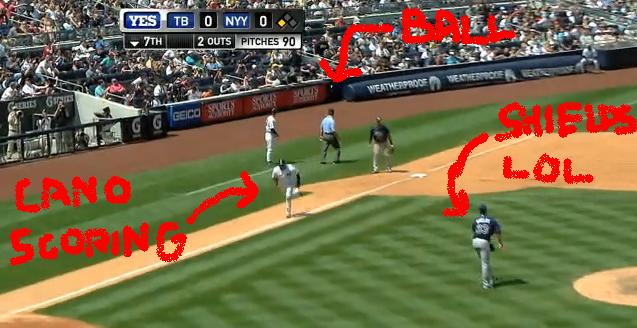 A Run On Two Baserunning Mistakes

Unfortunately for the Yankees, Jamie Shields matched Sabathia zero for zero. The Yankees smallballed their way out of a rally in the third (more on that later) and watched as Shields retired the next nine men he faced through the sixth inning. Robinson Cano snuck a single under Ben Zobrist’s glove at second to start the seventh, and things got a little crazy after that. Jorge Posada was hunting a first-pitch fastball and looped a fly ball into center, but Upton caught it on the run and had Cano stretched too far off the bag. He threw to first for what should have been a double play, but the throw ended up in the Yankees’ dugout. By rule, Cano advanced two bases to third when a good throw would have doubled him off the bag.

The Rays brought the infield in with the man on third in the scoreless game and it worked perfectly thanks to Russell Martin’s hacking at the first pitch. His ground ball went right to Sean Rodriguez at third, who looked Cano back to the bag before making the throw to first. Brett Gardner was at the plate hoping for a hit or a wild pitch to score the run with two outs, but the Rays got cute and tried to catch Cano napping at third. Shields made a pickoff throw to third that eluded S-Rod and went into foul territory, allowing Robbie to score easily. The thing is that the pickoff throw would have worked if the throw was on line; Cano was way off the bag and dead to rights. Upton’s throw and Shields’ pickoff bailed Cano out twice, but sometimes you need a little luck like that. The run was unearned, and I can’t imagine there are many 1-0 games where the run is unearned in the AL.

Stop me if you’ve heard this before, but the Yankees pulled off a sacrifice bunt and it didn’t work. Shocking, I know. Even better: it was Curtis Granderson, the team’s best hitter all season, who laid down the bunt. Eduardo Nunez and Derek Jeter reached on infield singles to lead off the third, Grandy bunted them over, then Mark Teixeira flew out into a double play because Upton threw out Nunez at the plate by ten feet. I mean really, what’s the thought process there? That the .244 hitting first baseman who can’t hit changeups will single in both runners against a changeup pitcher? Congrats, common sense lost again. Can’t wait for this to happen in a game with something really on the line.

I don’t think a player with two hits can have a worse day than Upton did. He singled in the fourth then immediately got picked off by Sabathia, who started a rundown between first and second. Upton then beat out an infield single in the seventh (more in a bit) but got doubled off first on Rodriguez’s line drive to right. He had his head down and just kept running. Then there was the throw into the dugout. Just a brutal day, especially when the Bleacher Creatures started serenading him with “B. J. Up-ton clap clap clapclapclap” chants after the run scored.

Shields kept the offense pretty well in check, the Yankees had just four singles, two of which didn’t even leave the infield. Teixeira drew the only walk way back in the first inning. He was pretty dominant, basically Sabathia with one inning of bad defense.

The Yankees are an absurd 26-5 in the day games, the best mark since the 1955 Dodgers also won 26 of their first 31 day games. Of course, that means the Yankees are 27-30 in night games. I suspect that’s more of a fluke than a trend. I can’t think of anything that would make a team play so much better during the day than at night. Anyway, the Yankees have won two straight and 14 of their last 20. That’s a fine way to head into the break.

MLB.com has the box score and video, FanGraphs the other stuff. 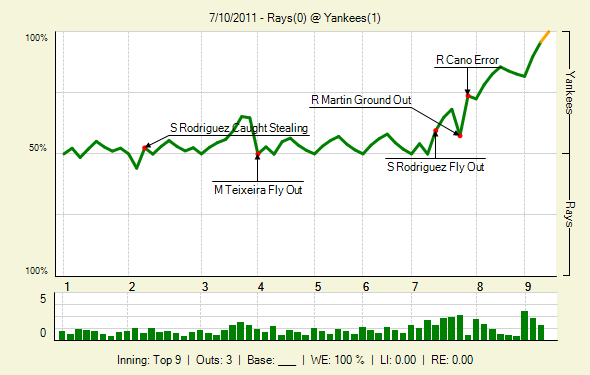 Three days off, which will be nice for the Yankees but bad for us fans. They’ll kick off the second half with four games in Toronto against the Fightin’ Bautistas on Thursday. Bartolo Colon gets that start, and here’s the rest of the team’s pitching plans. If you’re going to be in Toronto for the weekend, RAB Tickets can get you into the games dirt cheap.