On Tuesday Mike took a look at the A’s starters that are still under contract that could theoretically be acquired via trade. Today I wanted to look at a righty who pitched for the A’s last season that could be acquired for just money: free agent Rich Harden.

Before we dive too deeply into this, note that a potential Yankee acquisition of Harden almost certainly wouldn’t occur until January, comes with the assumption that they don’t end up signing either Yu Darvish or C.J. Wilson, and that the team would likely be looking at the oft-injured Harden as the 2012 version of either Freddy Garcia or Bartolo Colon.

Anyway, it wasn’t too long ago that Harden was one of the best pitchers on the planet. Starting with his inaugural season through the end of 2009, Harden compiled the 9th-best ERA (3.39) in all of MLB among pitchers with 750-plus innings. Among that same group he posted the top K/9 in all of baseball (9.35) and 15th-best FIP (3.58). 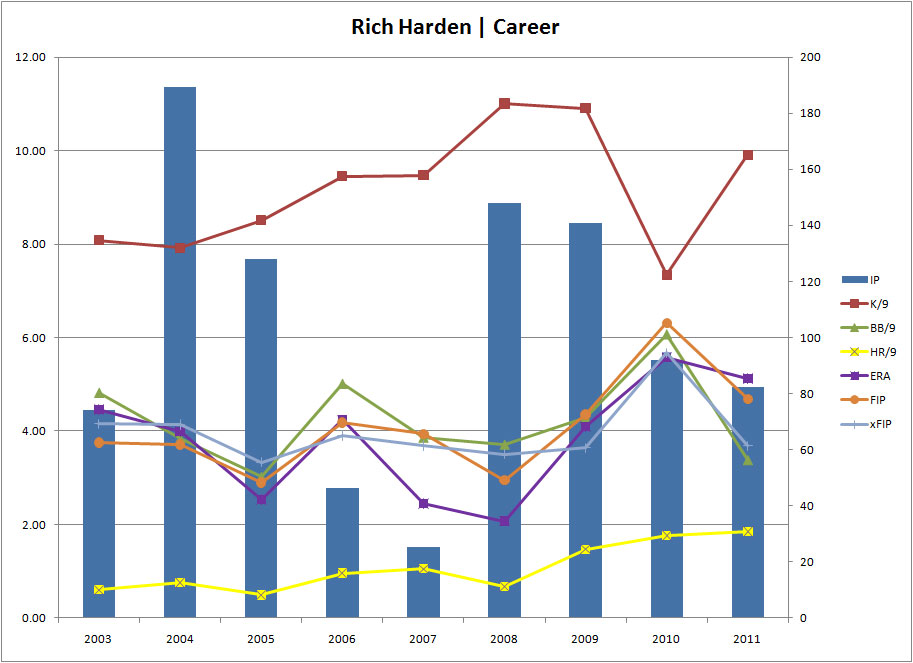 Unfortunately, while the soon-to-be 31-year-old Harden has frequently been brilliant, he has of course also frequently been injured. He’s never thrown more than 200 innings in a season, and has only even broken the 150-inning plateau once, back in 2004 (a career-high 189.2 innings and 31 starts). Harden’s litany of professional injuries began in 2005, as he lost more than a month to an oblique strain, and suffered a shoulder injury later in the year. The 2006 and 2007 seasons were almost entirely lost to injury, as he made a combined 13 starts in between recovering from a series of back, elbow and shoulder problems.

Harden got semi-back on track in 2008, turning in a superb 13 starts for the Athletics (2.34 ERA/2.83 FIP) before  being traded to the Cubs and compiling an even better 12 starts for Chicago (1.70 ERA/3.08 FIP) in the stretch run, though he still missed time with another right shoulder injury. The Cubs picked up Harden’s option for 2009, but still another back injury and right arm injury limited his effectiveness, and he turned in the worst full season of his career.

The Rangers ended up signing Harden in December 2009 to what seemed to be an aggressive one-year, $7.5 million deal. I was beating the drum pretty hard for Ben Sheets at the time — whose career rather eerily mirrors Harden’s — as both pitchers looked to be solid high-risk, high-reward signings. Harden wound up being terrible for Texas in yet another injury-plagued year, and was released after the season.

The A’s signed him to a one-year deal last winter, and though he (surprise, surprise) started the year on the DL with yet another shoulder injury, he threw fairly well over his first nine starts of the season, tossing to a 3.91 ERA and a crazy 10.2 K/9, showing that he still had his famous strikeout stuff despite a significant decline in velocity from his peak fastball. Unfortunately for Harden, the Yankees more or less broke him during the three-grand slam game, and he finished the season tossing to a 7.28 ERA over his final six starts.

So what does the enigmatic Harden have to offer potential suitors? I initially created a table breaking down his repertoire and results against righties and lefties over the last few seasons, courtesy of TexasLeaguers.com, but rather than post that monstrosity here I’ll just summarize.

Here’s the good news: all four of Harden’s pitches — the low-90s four-seamer, low-80s slider, low-80s changeup and low-80s splitter, were above-average Whiff% pitches against hitters from both sides of the plate. The changeup in particular wreaked havoc on righties, racking up a 30.8% whiff rate (compared to 12.6% league average). As a point of comparison, James Shields’s Whiff% with the change against righties was 20.5%. Now, Shields of course deployed the changeup quite a bit more frequently than Harden, but it’s still a point in Harden’s favor. Harden’s change has also been a valuable weapon against lefties, with a 20.5% Whiff%.

While the slider was a strong swing-and-miss offering against righties, they also punished his apparently fairly frequent mistakes, as 2.6% of his sliders left the yard. In fact, Harden gave up a career-high 1.85 home runs per nine in 2011. The remainder of his batted-ball profile is a bit scary as well, with a 22.8% LD% that would’ve put him among the highest in baseball had he enough innings to qualify (though CC Sabathia finished in the top 10, so it’s not as if that’s some automatic death knell), while his GB% would have been among the lowest in the league.

Still, Harden finished the season with a 9.91 K/9, which is bound to draw interest from a number of different parties, even with his myriad injury issues. Even though he hasn’t been an elite pitcher since 2008, I would be surprised if Harden was still on the market by the time the Yankees would theoretically come calling.

That said, if he is still hanging around come January, and the Yankees still have an opening in the rotation, if I’m the Yanks I would absolutely take a flier on Harden, who they were looking at as a potential waiver-wire acquisition in August, and who probably isn’t in line for all that much more than the $1.5 million he picked up with the A’s last season.