Much has been made of the Yankee-Red Sox rivalry over the years, although for my money the so-called “rivalry” didn’t really earn its name until the 2003 season, as the teams locked horns in the first of consecutive classic seven-game American League Championship Series. For a rivalry to exist, one presumes that both sides are relatively evenly matched, and prior to the 2000s this generally wasn’t the case for a good majority of Yankee-Red Sox teams.

In addition to the Red Sox of the aughts finally fielding a team as-good-as if not outright-better-than the Yankees, also helping dramatically ramp up the intensity between the two franchises was MLB’s implementation of the unbalanced schedule at the outset of the 2001 season. This of course expanded the number of times the Sox and Yanks faced off from 12-13 games a year to 18-19.

To illustrate just how closely matched the Yankees and Red Sox have become, the following two graphs depict the Yankees’ and Red Sox’ offense and pitching staffs since 1995, which seemed like a notable cutoff as it marks the advent of LDS play. There’s too much information presented to include labels, so if you’re interested in the raw data behind the creation of the graphs, please feel free to click here. 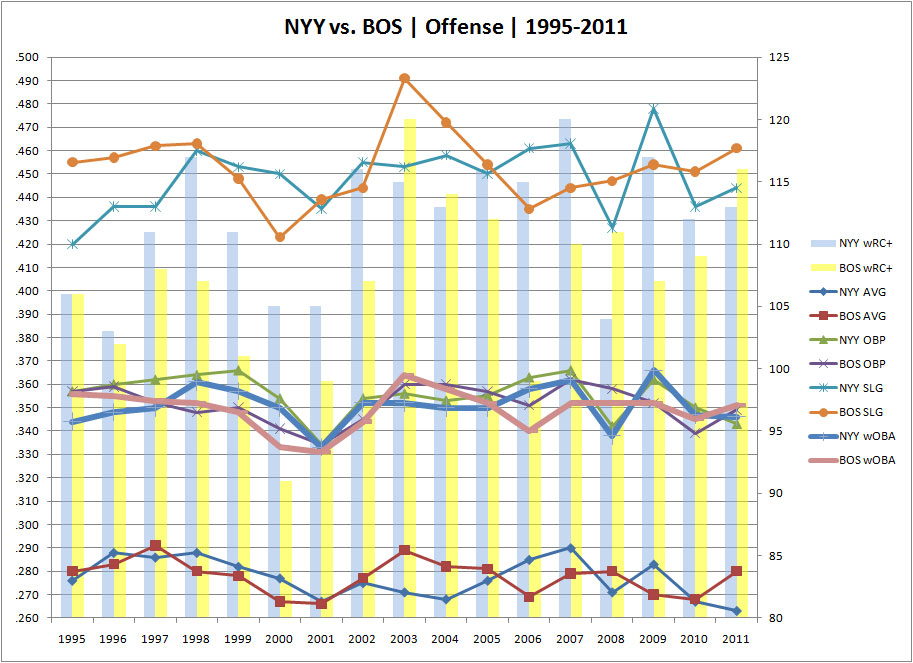 The two teams have been in a near-dead heat offensively since 1995, with the Yankees leading all of baseball with a .351 wOBA during that time frame (112 wRC+) and the Sox boasting the second-most-potent offensive attack at .349 and 107 wRC+. While the Sox have generally out-slugged the Yankees, the Bombers have typically been a tad more adept at getting on base. Additionally, given the favorable offensive environment that comes with playing 81 home games at Fenway Park, the Yankees have led the Red Sox in adjusted offense (wRC+) in 12 of these 17 seasons despite only bettering the Sox in wOBA in nine of them. Perhaps even more impressive regarding the Yankee offensive attack is that it’s been above average (100 wRC+) in each and every season depicted here, while the Sox actually posted below-league-average offensive attacks in 2000, 2001 and 2006. 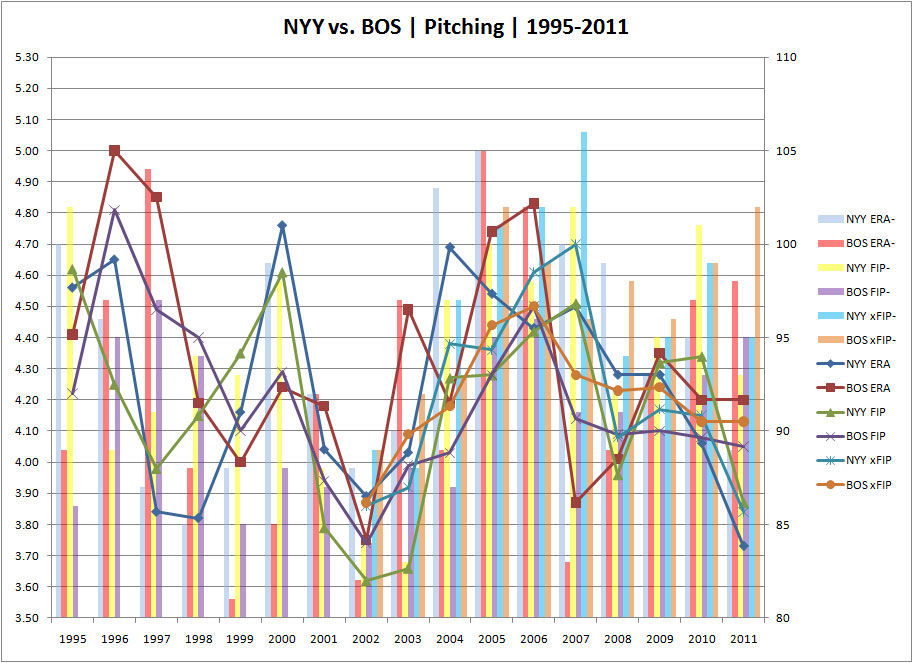 On the flip side, the rich offensive environment at Fenway makes pitching in Boston a tougher-than-normal task — that difficulty level has helped propel the Red Sox to tie or better the Yankees in adjusted ERA (ERA-) in 10 of these 17 seasons, and even more impressively, tie or better the Bombers in adjusted FIP (FIP-) in 13 of the last 17 seasons. However, one thing I was not expecting to find was that the Yankees actually lead the AL in both ERA and FIP since 1995, with 4.25 and 4.17 marks, respectively. The Sox are fourth in ERA, at 4.32, and second in FIP (4.19).

After years of essentially playing each other at a .500 clip, things spiraled comically out of control last season, as the Yankees started the year out losing eight of their first nine against Boston (a showing of ineptitude eerily reminiscent of the 2009 team’s 0-8 start against the Sox), due in part to an obscenely prolific Boston offense that was treating seemingly every member of the Yankee pitching staff as if they were Jose Cano in the 2011 Home Run Derby. However, instead of rallying to tie the season series like they did two years prior, the Bombers ultimately finished 2011 with a 6-12 record against the Sox — the Yankees’ worst winning percentage against Boston in a season since going 4-8 in 1999.

Despite dropping 12 of 18 contests against a heated division rival, the Yankees still managed to not only win the 2011 AL East, but also finished the season with the best record in the league, while the Fenway faithful had to endure perhaps the most historic (and horrific) late-season collapse in baseball history. Of course, even though the Red Sox have now missed the playoffs two years running — while boasting the top offense in baseball this past season (116 wRC+) and the second-best in 2010 (109 wRC+) — and haven’t won a postseason game since 2008, they remain one of the top teams in the American League and will undoubtedly give the Yankees fits again in 2012.

For one, if Josh Beckett can come close to approximating his 2011 against the Yankees — a season in which the Bombers acted as if they’d somehow never before seen Beckett, whose 1.85 ERA vs. New York in 34 innings was bettered only by Brandon Morrow’s 1.74 among pitchers who threw 20 or more innings against the Bombers — they’ll be trotting out a near-unhittable righty in probably five to six of the 18 games the two teams will play.

For another, if Jon Lester returns to his pre-2011 form, which saw him toss to a 1.19 ERA against the Yankees in 2008, a 4.43 ERA  in 2009 (if you take out the aberrant 2.1-inning, five-run outing on September 25 of that year, the ERA drops to 2.70) and a 2.13 ERA in 2010 — including carrying no-hitters into the sixth inning in both his August and September starts — they’ll be trotting out a near-unhittable lefty to take up another five to six of the remaining games, which means Boston will likely have a big-time pitcher on the mound in more than half their contests against the Yankees. Throw in Clay Buchholz, who has historically tended to struggle against the Yanks but appeared as though he’d finally figured something out in limiting the Bombers to two runs over seven innings in his last start against them on May 13, and Boston looks to have as formidable a top three in its rotation as any team out there.

With punching bag John Lackey out for the year and Daisuke Matsuzaka not expected back until late May, question marks abound surrounding the fourth and fifth slots in the Boston rotation — can Daniel Bard successfully make the transition from top-flight fireballing set-up man to successful starting pitcher? Will southpaw Felix Doubront or old friend Alfredo Aceves grab hold of one of the available holes in the rotation? And can the Red Sox’s starting pitching situation possibly be as bad again as it was in September of 2011, when they were forced to give nine of 27 starts to the troika of Andrew Miller, Kyle Weiland and Tim Wakefield while watching their stalwarts turn in enough ineffective performances to let the Rays come all the way back and sneak past them on the very last day of the season? Fortunately for Boston — whose pitching staff turned in a 5.84 ERA in the month of September — the answer to the latter question is almost certainly no, although whether any of the in-house candidates can step up and solidify the team’s biggest area of need will likely determine if the Sox make it back to the playoffs or get relegated to their couches for a third straight October.

Though they lost elite closer Jonathan Papelbon to the Phillies during the offseason, new Boston GM Ben Cherington rebuilt his bullpen on the fly with a series of interesting moves, acquiring former Athletics closer Andrew Bailey for outfielder (and designated-player-who-gets-a-hit-every-time-up-against-the-Yankees-even-though-he-sucks-against-everyone-else) Josh Reddick, and replacing Bard with former Yankee wunderkind Mark Melancon, acquired for Jed Lowrie (see Reddick’s description). Given the fungibility of relief pitching performances, I wouldn’t expect the Red Sox ‘pen — which actually finished the year with the fourth-best ERA and top FIP in the AL despite a wretched April — to miss a beat. Expect Aceves to log his share of relief innings, while Michael Bowden, lefty Franklin Morales, Matt Albers and Andrew Miller appear to be on their way to at least starting the year in the Boston bullpen.

As for the 2012 Red Sox offense, while I’m certainly pleased as punch that flies-in-the-ointment Lowrie (.330/.423/.534 career against the Yankees) and Reddick (annoying walk-off hit) are gone, Boston’s offensive attack remains relatively unchanged from the relentless machine that pounded out an MLB-high .347 wOBA last season. Jacoby Ellsbury will look to prove the doubters that the adjustments he made are here to stay, while Dustin Pedroia, Kevin Youkilis (if he can finally stay healthy) and Adrian Gonzalez make for one of the most potent hearts of any order in all of baseball. Add in another presumed solid season from David Ortiz (who is apparently immune to the dead cat bounce) and a year that has no choice but to be better from Carl Crawford (whenever he returns from the DL), and the Sox have no holes from 1-6 in their lineup.

However, some cracks in the armor start to appear in the lineup’s lower-third, where new manager Bobby Valentine will generally be starting some combination of Jarrod Saltalamacchia (.319 wOBA in 2011), Cody Ross (.321), Ryan Sweeney (.306), Mike Aviles (.307 wOBA, though .338 as a Red Sock) and Nick Punto (a completely out-of-character .350 wOBA in 2011; .296 for his career). While Saltalamacchia looked like he was finally coming into his own last season none of these players seem overly threatening, although then again I’m sure I would’ve said the same thing about Mark Bellhorn had I been blogging during the 2003-2004 offseason, who rebounded from a .296 wOBA in 2003 to post a .360 mark in 2004 after he joined the Red Sox. For whatever reason, donning a Boston uniform seems to turn even the scrubbiest of players into superstars from time to time, so I’m prepared to eat my words when Boston’s bottom third starts tearing the cover off the ball.

CAIRO has the Red Sox at 92-70, tied with the Rays for second place in the AL East; PECOTA pegs them at 90-72, also in second place in the ALE; and Oliver has them at 92-70 and second-best record in the AL. All three of these scenarios would entail the Sox securing one of the two AL Wild Card berths and playing the one-game playoff to advance to the LDS round, and so barring another disaster, Boston is most likely playoff-bound in 2012.

The Yankees’ first set of the season against Boston is at Fenway Park from April 20-22, and as ridiculous as I find conspiracy theories, at this point I almost can’t help but wonder whether the schedule-makers have it in for the Yanks by once again scheduling an April series at Fenway. Since the advent of the unbalanced schedule in 2001, the Yankees are — believe it or not — a ridiculously bad 8-22 at Fenway Park in April, and have only won their annual April set at Fenway against the Red Sox once (back in April 2010)  in that 11-year span. Not only that, but prior to their April 2010 series win, the last time the Yankees had won an April set against Boston at Fenway was in 1975. So yeah, needless to say I’m really excited to be playing the Red Sox in April at Fenway again, you guys.