The Yankees and Orioles have been neck-and-neck all season, so something will finally have to give in Game Five tonight. They’ve played 209 innings across 22 games in 2012, with New York scoring 103 runs and Baltimore 101. Those 22 games have been split right down the middle at 11-11.

1. The lineup has to change tonight. The Orioles are starting hard-throwing righty Jason Hammel and Alex Rodriguez can not start. He’s 0-for-12 with nine strikeouts against same-side pitchers in the series and looks completely and utterly helpless. Eric Chavez has not been any great shakes himself lately, but the team’s best chance to win tonight has him at third base and A-Rod on the bench. Curtis Granderson has been the club’s worst hitter in the postseason and needs to sit as well. He’s done nothing, absolutely nothing to help the offense. It’s great that he can run into a homer at any time, but the Yankees can’t afford to wait for him to click. Since Brett Gardner hasn’t had enough at-bats lately, just stick Raul Ibanez in left to start the game. CC Sabathia is a ground ball pitcher and hopefully Ibanez’s defense can be hidden, plus Derek Jeter may need another DH day because of his bone bruised left foot.

2. Now obviously the entire offense is struggling, but you know what hurts more than Granderson’s strikeouts or A-Rod’s feeble at-bats? It’s Robinson Cano being a no-show. He’s 2-for-18 in the series (run-scoring doubles in Games One and Two) with an intentional walk. No one on the planet was hotter was Robbie at the end of the season, but either the three days off before the ALDS cooled his bat or the Orioles are just doing a great job of pitching to him. When I see at-bats like this… 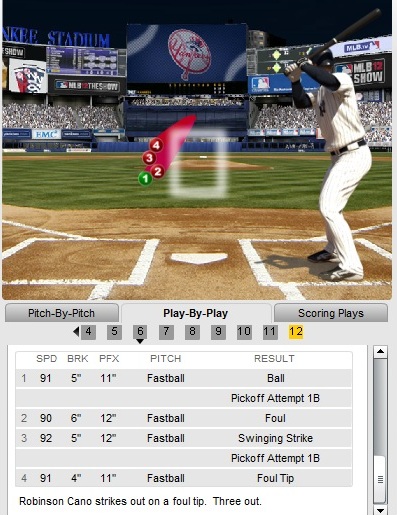 … I tend to think it’s more the latter, though I’m sure the time off had something to do with it. Cano will never be the most disciplined hitter in the world, and that’s a weakness that can be exploited from time to time. The Yankees need him to be the impact hitter in the middle of the order and right now he’s not doing it. Not even close.

3. It’s great that Joe Girardi has faith in his players and he trusts them to turn things around, but his biggest weakness as a manager is his stubborn refusal to see the forest for the trees and make changes. When Jorge Posada and Brett Gardner were the only players hitting the ALDS last season, they stayed at the bottom of the order while A-Rod, Mark Teixeira, and Nick Swisher remained in the middle of the lineup and it ended their season. Remember what happened with Tino Martinez and Wade Boggs in 1996? They didn’t hit a lick in the postseason and Joe Torre benched them. The team was better off with them out of the lineup so the change was made and it helped the Yankees win. Girardi has to be more proactive and not just sit around and wait for things to correct themselves. There’s no time for patience anymore.

4. The Yankees have allowed nine runs in 42 innings in the ALDS. Nine runs in 42 innings. That’s a 1.93 ERA as a team. All four starter have turned in not just quality outings, but dynamite efforts that more than gave the club a chance to bullpen. The bullpen has allowed just one run in 11.1 innings, or five fewer than Jim Johnson has by himself. The Yankees have scored eight runs after the seventh inning in the four games compared to one for the Orioles. The entire pitching staff from top to bottom has been brilliant, and it can all go to waste because the bats have gone silent. It would be an unbelievable shame.