Two years ago the Yankees faced an uncertain future at shortstop following Derek Jeter’s retirement. The last year or two of Jeter’s career weren’t great, he was a below-average hitter at that point, but there was something comforting knowing he was going to be the guy at the position. Shortstop’s important! That’s not a spot to have a revolving door.

Now the future at shortstop is far from uncertain. The Yankees acquired Didi Gregorius to replace Jeter and there were legitimate questions about his ability to be an everyday big league shortstop. Would he hit enough? Is his defense enough to carry his bat? Could he handle the pressure of replacing Jeter and playing in New York? There were lots of questions. Now there aren’t. Gregorius is the answer at short.

It wasn’t unreasonable to expect Gregorius to produce more offense this season, especially in the power department, and he did exactly that. Didi hit 20 home runs this summer, the same number as Carlos Correa, and seven of the 20 came during a four-week hot streak at the end of the first half. At one point he hit five home runs in the span of ten games. One of the five was a walk-off against the Rangers.

There are reasons to believe Gregorius’ power spike are legit and reasons to believe it might have been a little fluky. In reality, it was probably a little of both, right? You’ve got a prime-aged left-handed hitter in Yankee Stadium, so you’d expect a power uptick. Homers also jumped around the league this year — I think the baseballs are juiced, but who knows — and surely Didi benefited some.

I’ve never seen a ground ball go over the fence, so a prerequisite for hitting for more power is hitting the ball in the air more often. Take a look at Gregorius’s ground ball rate since joining the Yankees: 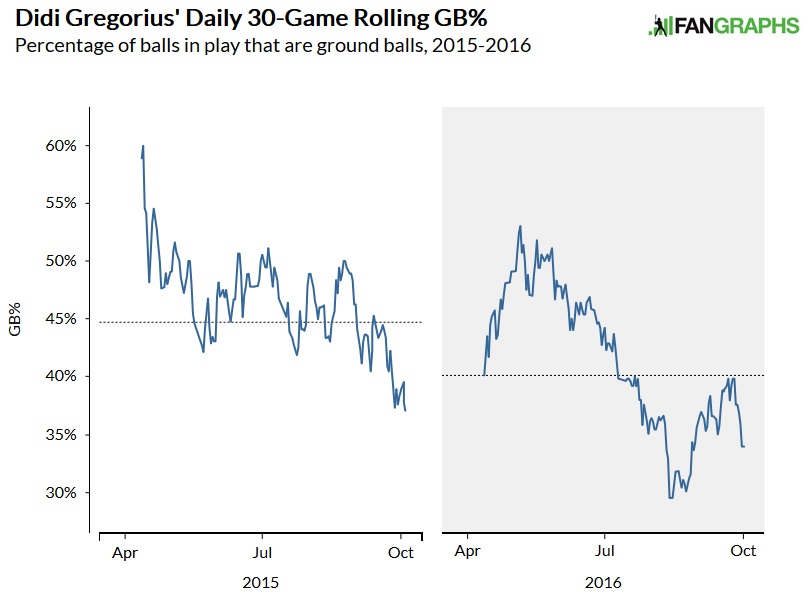 Well well well. Look at that. When Gregorius first arrived in New York, he was beating the ball into the ground. His ground ball rate has been in steady decline since. Didi had a 48.0% ground ball rate and a 36.0% fly ball rate in April 2015. It was down to 31.0% grounders and 56.0% fly balls in September 2016. Pretty awesome. Gregorius isn’t a speedster. Driving the ball in the air is the best way to do damage.

The best part of Didi’s newfound ability to get the ball airborne is that he isn’t selling out and trying to yank everything down the line. We’ve seen more than a few left-handed hitters fall in love with the short porch and try to pull everything to right. Gregorius is still hitting the ball to all fields. In fact, he was hitting more balls the other way this year than last year. 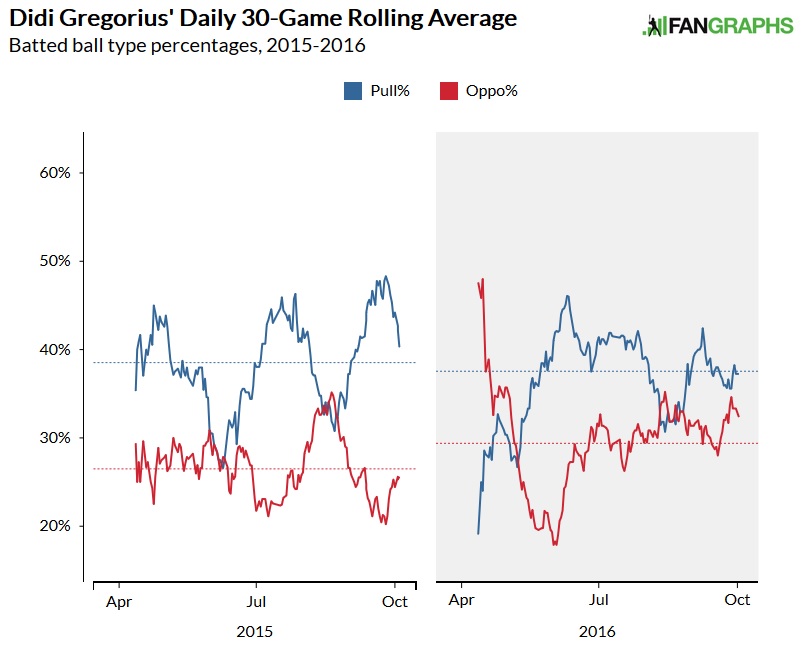 This is a wonderfully positive development for Gregorius. He’s hitting the ball in the air and the result is more home runs, and he’s been able to do that without sacrificing the all-fields ability he showed last year. For someone who makes so much contact — Didi had the 26th lowest strikeout rate (13.7%) among the 146 qualified hitters in baseball in 2016 — this is a really great skill set. Really, really great.

Now, as I said before, power was up around the league this year, and I have no doubt Gregorius benefited a bit from that. He hit for more power this summer because everyone hit for more power this summer. (Except Brett Gardner.) Let’s quickly compare Didi’s isolated power to the league average, while adjusting for ballpark. Same idea as OPS+, basically, except we’re using ISO instead of OPS.

Success! Last year Gregorius’ power output was 57% of the league average left-handed hitter in Yankee Stadium. This year it was 77%. So still below-average for his environment, but there’s still a legitimate improvement here. Those 20 home runs he hit this year weren’t just the product of the increase in power around the league. Didi himself improved. Hopefully he takes another step next year, in his age 27 season.

This year, Gregorius managed to reverse the split. He was better against lefties than righties. Didi put up a .258/.283/.437 (88 wRC+) batting line against righties while hitting a whopping .324/.361/.473 (126 wRC+) against lefties. Fifty-four left-handed hitters had at least 100 plate appearances against left-handed pitchers this year. Among those 54, Gregorius ranked third in AVG, 13th in OBP, and eighth in SLG. Only Charlie Blackmon (.331) and Daniel Murphy (.329) had better left-on-left batting averages.

The question now is why? Why did Gregorius improve so much against lefties, and is this his new true talent level? I’m guessing he’s not really quite this good against lefties, but some improvement would be cool. Here are Didi’s core stats against lefties the last two years:

There are two huge differences there. One, Gregorius hit way more balls in the air against lefties this year than last year. That’s consistent with everything above about his power output. His soft contact rate dropped a ton too, though it became medium contact, not hard contract. That’s still better than nothing.

Is Gregorius going to hit .320/.360/.470-something against lefties going forward? I find that unlikely. That doesn’t mean his improvement was a total mirage, however. A .331 BABIP in 161 plate appearances is not completely insane. It might not happen against next year, but it’s not so outrageous that it’ll never happen again, you know? I think there’s real improvement here. Didi is making more contact against lefties and hitting the ball in the air more often in general. Those are big positives.

A Good Bad Defender, or a Bad Good Defender?

In terms of raw defensive tools, Gregorius is as good as anyone. He’s athletic, he’s got good hands, and his arm is a rocket. One of the best I’ve ever seen from a shortstop. Why then did the defensive stats hate him so much this year? Almost all of them, across the board.

Total Zone is the only holdout. DRS, UZR, and FRAA all dinged Gregorius this year, and by quite a lot too. We’re talking a full win in the field according to both DRS and UZR. That’s pretty crazy. That’s why Didi went from +3.1 fWAR and +3.3 bWAR in 2015 to +2.7 fWAR and +2.2 bWAR in 2016 despite his offensive improvement.

The eye test told me Gregorius was a really good defensive player this year, though I also thought there were a few more miscues than last year. Basic mistakes. A bobble, a ball not knocked down and kept on the infield, that sort of thing. Error totals don’t really help us — Didi had 13 errors last year and 15 this year — and I’m not sure really how to quantify this stuff. The various defensive stats are better than nothing, though they’re far from perfect.

I do have a very hard time believing Gregorius cost the Yankees with his glove this year. Was he really, truly, a negative in the field? Maybe he was! Maybe I’m my perception of quality shortstop defense is distorted after watching Jeter all those years. I see stuff like this …

… and think hey, this dude is pretty good defensively though. I thought Didi was really good in the field this year. The defensive stats disagreed. Feel free to form your own opinions.

The Yankees are blessed with a ton of quality shortstop prospects right now, most notably Gleyber Torres and Jorge Mateo. There’s also Tyler Wade, who figures to open next season in Triple-A. Those guys don’t matter right now. Gregorius is New York’s unquestioned shortstop going into the next season and will be continue to be going forward until one of those other guys unseats him. The Yankees won’t give Torres or Mateo the job. They’ll have to take it.

Gregorius is under team control through 2019 as an arbitration-eligible player — MLBTR projects a $5.1M salary next year — and it would behoove the Yankees to approach him about a multi-year contract extension this winter. Forget about the prospects in the minors. A prime-aged up-the-middle player who plays good defense and can smack 20 dingers is a valuable asset worth locking up. The Yankees can figure out what to do with Torres and Mateo when the time comes.